The arrival of the German, World Squash Federation and Paderborn Squash Club flags, dropped into the gardens of the famous Water Castle in Schloss Neuhaus by a parachute team, signalled the opening of the 23rd WSF Men’s World Team Squash Championship in the German city of Paderborn.

A record-equalling 32 nations are competing for the World Squash Federation title at the Ahorn-Sportpark in Paderborn, from 21-27 August, as the sport presents its first senior world championship since the IOC announcement that Squash is on the shortlist for Olympic inclusion in 2020. 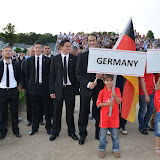 After the introduction of distinguished guests – including WSF President N Ramachandran, Paderborn BurgermeisterHeinz Paus and the President of the German Squash Federation Wolfgang Bauriedel – local band Bahn-Orchester Altenbeken led the officiating referees and participating teams into the arena.

The long procession was rounded off by hosts Germany, led by championship ambassador Simon Rosner, the German number one who hails from Paderborn. 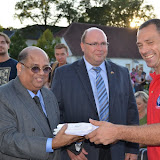 “Paderborn is proud to host these championships and grateful to the WSF for the decision to bring the first men’s world championship to be held in German to our city,” said Mayor Paus. “The historic city of Paderborn is not only known as a university city and a city of culture, but also a city of sport, and we are proud that Paderborn Squash Club are winners of the European Club Championships five times.”

Mr Ramachandran praised the hosts for the superbly-organised championship: “The WSF is mounting a bid to get the one slot available to a new sport in 2020 Olympic Games – and we have invited IOC members to this superb presentation, where I am sure they will see squash in a new light,” said the WSF President. “The organisers here have set the bar really high here – they have given us a real showpiece.” 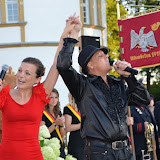 Event ambassador Simon Rosner admitted that he had been talking to fellow players on the Tour about the championship in his home city for a long time: “I am proud of this fantastic event that has brought the best players in the world to my city. But now it’s time for us to deliver – and I can’t wait.”

After a performance of the Championship song ‘Somos Estrellas’ by Ritmo 69, Rosner then invited President Ramachandran and Mayor Paus back to the podium to officially declare the championship open. 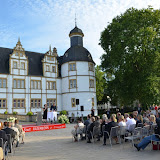 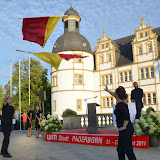 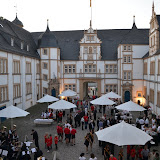