WSF President N Ramachandran today stressed that innovation will be a core element of Squash’s campaign for inclusion into the 2020 Olympic Games. He also outlined the significant growth the sport has achieved in recent years and some of the major enhancements that have been introduced since Squash’s most recent campaign for Olympic inclusion for 2016.

At the launch of its Olympic 2020 campaign in London, the WSF also revealed the campaign slogan – Squash: Sport at its Best 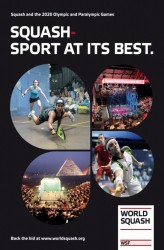 President Ramachandran said: “We know we have to show the International Olympic Committee that Squash is a fantastic product, and that we are not scared to innovate. Over the past few years, since our last campaign for Olympic inclusion, the sport has progressed significantly with the introduction of SquashTV, “Video Review” technology, new and exciting showcourts with revolutionary lighting and an international ambassador programme. It is vital over this next campaign that we communicate these innovations to the IOC to show just how far the sport has come, and what the exciting plans are for the future of our sport.

“Squash is a growing, global sport played by 20 million men and women on more than 50,000 courts in 185 countries. We have thriving men’s and women’s professional tours – more than 500 players from 74 nations compete on the men’s tour and over 350 on the women’s. Prize money is growing, as are the number of events across the world, and our global calendar would be a fantastic promotional platform for Olympic Squash. It really is an exciting time for our sport.”

Supporting the WSF 2020 Olympic Campaign, Malaysia’s world No1 Nicol David said just minutes after winning a record sixth World Open title in Rotterdam yesterday: “There is no question that the Olympic Games would be the absolute pinnacle of my career and I would happily trade all my 6 World titles for Olympic Gold.” 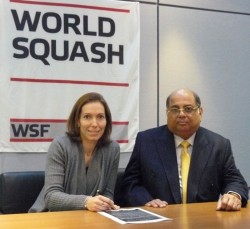 Women’s world No3 Madeline Perry today added her weight to the Squash 2020 Olympic Campaign by signing a letter pledging her support to Squash 2020. “Squash is a huge sport and to have the chance to represent my country on the world’s greatest sporting stage would be amazing, not just for me, but for all players around the world,” said the 34-year-old from Belfast.

 The Professional Squash Association’s dedicated TV operation SquashTV has covered over 20 major events with distribution to 20 broadcasters worldwide, with a potential reach of 340 million viewers

 The 2011 Men’s World Team Championship in August in Paderborn, Germany, raised the bar for international events: Centre-stage was the very latest all-glass showcourt, featuring new larger glass panels, on-court air conditioning, a new floor and revolutionary lighting – all of which provided an enhanced experience for both athletes and spectators

 Led by Malaysia’s new record six-time World Open champion Nicol David, the WSF Ambassador Programme will be launched later this month in Riga – where David, with a leading international coach and referee, will highlight the sport’s appeal to the public, media, referees and coaches from Latvia and neighbouring countries 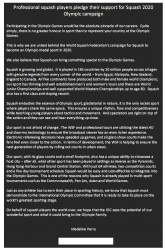 Madeline Perry has become Ireland’s most successful player of all-time, boasting not only 12 Irish national titles, but nine WISPA World Tour titles from 22 final appearances. Incredibly, it was after a life-threatening off-court injury in 2007 that Madeline achieved her best successes. She achieved arguably her best single result at the British Open in 2009, beating the then (and still) world number one Nicol David in the quarter-finals en-route to a first-ever appearance in the prestigious event’s final. Less than a year later, she won her biggest title at the Australian Open in Canberra, before clinching her fourth Irish Open crown in Dublin. Madeline has led Ireland with distinction in five World Team championship campaigns since 2002 and represented her country in all four of the sport’s appearances in the Commonwealth Games since 1998. Her latest international title triumph came at the Singapore Masters in July, three months after reaching a career-high world No3 ranking.