Mr N Ramachandran, President of the World Squash Federation, has been honoured by the government of India for his contribution to the growth and popularity of Squash.

Elected as WSF President in 2008, Ramachandran established the Indian Squash Academy in his home city of Chennai more than ten years ago.  The ISA has not only nurtured a number of top international players – includingSaurav Ghosal, who last year became the country’s highest world-ranked player ever – but has also hosted a number of leading international events. 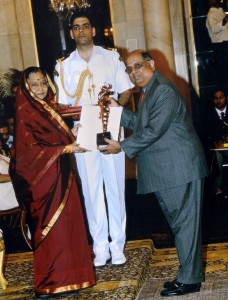 “The conferment of the Rashtriya Khel Protsahan Puraskar is the highest award that the government can bestow,” said the WSF President after being honoured in Delhi.  “It is a tribute to the dedication and hard work of the coaches and trainees of the Indian Squash Academy.

“This unparalleled government recognition augurs well not only for Indian squash but also for WSF and our dream of becoming an Olympic sport.”