The U21 World Cup has been hailed as a major success – not only for the unveiling of the exciting new dimension of LightPower under-floor lighting beneath the ASB GlassCourt glass floor, but also for the introduction a new mixed team event into the sport.

The new event – based on the successful model of the two-man-one-woman teams in the biennial (senior) WSF World Cup – was staged at the Express Avenue Mall in Chennai, the largest shopping complex in southern India.

The event climaxed in a dramatic and unexpected final between Egypt and India – the top seeds versus the fourth-seeded hosts. Spurred on by an exuberant crowd seated around the all-glass court as well as hanging over balconies stretching three floors above, outsiders India staged a remarkable fight back in the second match to force a decider before ultimately falling to the favourites. 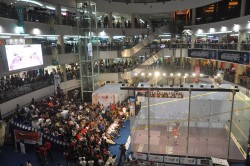 The new court featured an experimental glass floor with a superb new substructure allowing great ‘spring’ and the ability to use different colours and advertising signs under the floor. This exciting new development featured a multitude of LED lights beneath the floor, allowing scores, service boxes, sponsor signs and patterns to be displayed to add to the spectator enjoyment.
“The event showed once again the sheer versatility of squash presentation,” explained WSF President N Ramachandran. “The shopping centre itself attracted a near record attendance of over 75,000 on finals day – a massive crowd exposed to the sport as they passed the central atrium, or overlooked the action from above, or were simply intrigued by the spectacle as they went from floor to floor on the escalators that passed beside the playing arena.

“It was an overwhelming success, not just for squash in India but around the rest of the world,” added Ramachandran. “And a very successful debut for the championship which can only grow as it continues biennially.”

In addition to substantial media coverage in the home nation, all matches were available live on-line and there was television coverage of the final three days at the Express Avenue Mall.

Hein Verbruggen, President of SportAccord and an Honorary IOC Member, was a special guest at the championship. “I’m very pleasantly surprised for your federation,” said Mr Verbruggen after watching the final. “It was a breath-taking final – probably the best you could possibly have hoped for. India did a great job and I’m very happy I’m here.”

The introduction of a new world championship which bridges the gap between the junior game, which has for many years provided international competition at U13, U15, U17 and U19 levels, and the senior tours, was widely applauded. 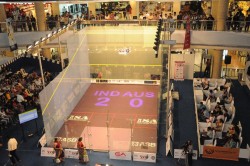 Australian Rodney Eyles, the distinguished former world champion and Commonwealth Games silver medallist, was extremely enthused by the introduction of the U21 team event: “It’s very significant from Australia’s point of view. We’ve suffered over the years from the transition from junior to senior level – but we can now show our youngsters a good pathway, laying the foundation for the PSA and WSA Tours.

“The World Squash Federation have brilliantly orchestrated this and the countries have really supported it,” added Eyles.

“It’s exactly what we needed and I think it will really help inspire our youngsters to take up the game.”