The staging of the Commonwealth Games Squash Championships in Delhi has been hailed as an overwhelming success by the World Squash Federation at its AGM.

Led by 19 players from the men’s and women’s world top 20 rankings, with representation from 27 countries, the championships field was truly world-class – with England emerging triumphant in the medals table, followed by Australia, New Zealand and Malaysia.

“It’s definitely the biggest moment of my career,” admitted England’s world number two Nick Matthew after winning his second gold medal in Delhi – his first being in an English clean sweep of all three men’s singles medals.  Australia’s Kasey Brown went home with three medals (one gold and two bronze), while New Zealander Joelle King became her country’s most successful athlete, and clinched the chance to carry the Kiwi flag at the Closing Ceremony, after unexpected gold in the Women’s Doubles and silver in the Mixed. 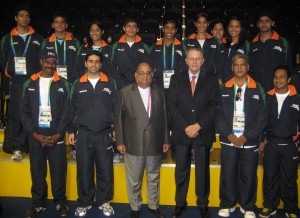 The event was staged in the purpose-built 11-court Siri Fort Complex – which featured a spectacular all-glass showcourt surrounded by seating for more than 3,000 spectators.

“The crowds overall were sensational – most players agreeing that they had never experienced anything like it anywhere else in the world,” said WSF CEO Andrew Shelley.  “The exuberance of the spectators as Nicol David paraded the Malaysian flag around the showcourt after her singles gold medal triumph will remain with me forever.

“The Siri Fort facilities are a great legacy of the Games – and will surely kick-start the development programmes in Delhi as well as being another focus for events.

“We attracted visits from some extremely distinguished guests of the Delhi hosts, including IOC President Jacques Rogge; Prince Albert of Monaco; and HRH Prince Edward, the Earl of Wessex,” added Shelley.  “All expressed their enthusiasm for what they saw.

One of the proudest squads competing in the game hailed from Norfolk Islands:  “I know it is not as great as winning a medal, but it is a big deal to us that Duncan Gray and Gye Duncan got in to the last 16 in the men’s doubles competition in Delhi – and the two teams they got beaten by were the two Australian teams which got the silver and bronze medal,” said team captain Mal Rundell. 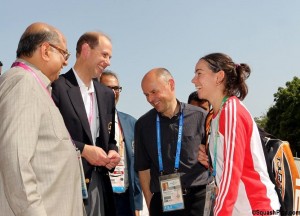 “They got a good number of points against them considering we had never even got close to getting a game before in the Commonwealth Games and even better that that we have only got 30 adult members in our club and we don’t have a doubles court to train on.”

One of the venue’s most impressed visitors was Sir Matthew Pinsent, the four-time Olympic rowing gold medallist who was reporting for the BBC.

“Squash would be a good addition to the Olympics – it is relatively easy to set up, especially in a modern urban environment, and is fast and exciting to watch both on television and live,” said Pinsent in a BBC blog.

“Crucially, the Olympics would be the absolute pinnacle of what the sport offers – unlike so many of the current sports in the programme (such as tennis, football and arguably now rugby sevens).

“The fact that squash can compete with many of the sports already in the Olympics on many of these makes me think that they must be head of the list should the 28 sports ever be increased even by one.”