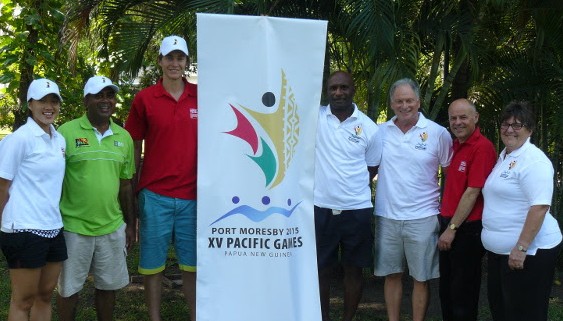 The visit to Papua New Guinea by World Squash Federation Ambassadors Cameron Pilley and Low Wee Wern has boosted the Oceanian country’s bid for squash success in both the 2014 Commonwealth Games, which will take place in Scotland next month, and the 2015 Pacific Games which will be hosted by Papua New Guinea next July to celebrate the 40th anniversary of the country’s independence.

Pilley, the Australian number one who is 17 in the world, and Malaysian Low, the women’s world No7, are spearheading the 2014 WSF Ambassador Programme visit to the PNG capital Port Moresby. The WSF international promotional initiative, launched three years ago, has been devised to highlight the appeal of Squash in countries where the sport is at a developing stage. As well as the two leading players, the team also features AustraliansMarc Forster and Nathan Turnbull who are providing coaching and refereeing workshops, respectively, and is led by WSF CEO Andrew Shelley.

In addition to staging exhibition matches and running clinics with schoolchildren, Pilley and Low also hosted training sessions with members of the national men’s and women’s squads who will be competing in Glasgow next month.

Papua New Guinea will be sending a record eight-strong athlete squad to the 2014 Commonwealth Games, only one of whom has competed in the Games before.

“We cannot expect medals in Glasgow – our goal is to give our players international exposure,” said Edmond Pereira, President of the Papua New Guinea Squash Federation.

“Only a couple of our players have played on the international stage, so this Ambassador visit and the competition in Glasgow will give our players the chance to raise their game.

“Our target is the 2015 Pacific Games here in Port Moresby – participating in the Commonwealth Games is part of the build up to that.

“We want to maximise the benefit of home advantage,” added Pereira. “We have a number of gold medals in our sights.”

One of PNG’s star players will be Linette Vai, a 15-year-old former Australian Junior U15 Open champion and the reigning Victorian Junior U17 Open champion who recently moved to Penang in Malaysia where she is educated at a local international school and trains with Low Wee Wern and her coach Aaron Soyza.

“Linette’s game has improved considerably since she moved to Penang,” said Perreira. “She is already our number one player.” Three new state-of-the-art squash courts (convertible to two doubles courts) will be built at the Port Moresby Racket Club as part of a major investment programme being undertaken for the 2015 Pacific Games – the third to be held in Port Moresby, ‘the sporting capital of the Pacific’, since 1969. On the WSF Ambassador visit to PNG, Flood added: “Taking the effort to travel here from the other side of the world is very positive for squash – making that investment is pretty unusual.” The WSF Ambassador Programme first visited the Baltic country of Latvia in 2011, followed in 2012 by a trip to the African countries of Malawi and Namibia, before last year taking in Panama and Venezuela.