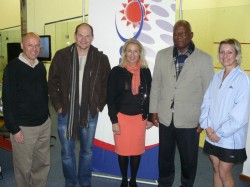 The WSF Ambassador Programme, a World Squash Federation initiative designed to highlight the appeal of squash in countries where the sport is in its infancy, arrived in Namibia after beginning its Africa leg in Malawi. Malaysia’s world number one David, who led the inaugural WSF initiative last year to Latvia, was accompanied for the first time by 21-year-old El Shorbagy, the world No8 from Egypt.

On arrival in Windhoek, the party was welcomed at a press conference hosted by the Trustco Group, sponsors of the Namibian Squash Association for the past ten years.

“It is truly an honour to host this distinguished group from the world of international squash,” said Quinton van Rooyen, CEO of the leading Namibian company. 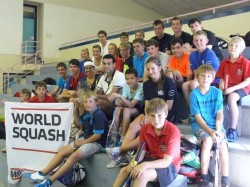 Next stop on the tour was the country’s second city Walvis Bay, where the Buccaneers Club – based at WASRA sports centre – has played a leading role in the sport’s development with an impressive junior initiative. The four-court club hosts two afternoon sessions a week for some 20 youngsters from the nearby Walvis Bay High School, run by coach Luke Allen.

“We couldn’t believe it when we heard that such eminent players would come here to pass on tips to our kids,” said Allen. “I don’t know about them, but I certainly couldn’t sleep at all last night in anticipation of the visit!”

Among those who benefitted from the experience of playing with the two squash stars were promising pupils Gerard Lottering and Brandon Grane. “I thought a world number one would be much taller!” said 11-year-old Grane – while Lottering, aged 12, added: “This will improve my squash a lot. I will always remember this day.” 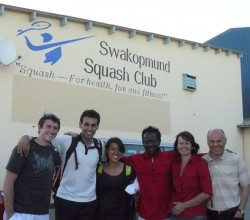 The group moved up the coast to popular resort Swakopmund, home of the SFC Club. After sessions with a number of club members, David and El Shorbagy took on the club’s two top men, before further demonstrating their skills to an enthralled crowd with an exhibition match between the pair.

“It’s such a privilege to be exposed to such world-class squash – we can’t top this,” exclaimed club chairman Conrad Wagner.

A week earlier, the club had staged a 24-hour squash marathon for the Cancer Association of Namibia – sparked off by two club members being struck down by the illness. The two star players presented a cheque for 15,000 Namibian dollars to the charity’s district head Mrs Geduld.

“We’ve been running a major drive to attract new members and after our charity effort last week this visit has been the icing on the cake,” added Wagner. 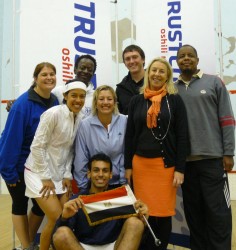 Back in Windhoek, the climax of the visit came with a hugely-popular evening at the city’s Wanderers Squash Club, in which David took on the country’s top five women, one after the other, and El Shorbagy showed off his prodigious talent against the nation’s top five men.

The evening attracted a more-than-capacity crowd which included both the Ambassadors of Malaysia and Egypt – Mustafa Mansor and Dr Haxem Ramadan, respectively, accompanied by several of their staffs – plus Ben Naobeb, Vice Chairman of the Namibian Sports Commission.

The entertainment, all filmed for a promotional DVD for the Namibian Squash Association, came to a climax when David and El Shorbagy met for the third time in three days in a glorious exhibition match which had the crowd shouting for more.

“This whole experience has really been something special,” said Van Rooyen. “It’s been a fantastic event – it’s such an honour to have you here.”

Gwen Lister, the distinguished founder and long-time editor of The Namibian newspaper, was recently invited to become Patron of the squash association after falling in love with sport when introduced to it at the age of 49. “Squash is a niche sport – but I think it can break barriers.

“We must make the sport accessible to youth in the townships,” added Lister. “In order to get more sponsors, we have to ensure that squash is more readily available to the black community.” 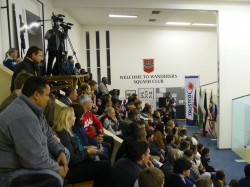 Namibia will host the All-Africa Championships, both for seniors and junior, for the first time in 2013. “This will be a major operation for us – but this visit has given us new energy,” explained Kakehongo. “The whole experience has been very empowering for us – it will help give squash a higher profile in the country.

“We hope this new energy will help us achieve our objectives, like new squash facilities in new parts of the country.”

Adrianna Lambert, Chairperson of the Namibian Squash Association, felt that the visit had given the sport a new vitality: “Everybody wants to play squash now.

“We have been blessed with sponsorship backing from Trustco for the past ten years and we are coming to the end of the three-year deal we made in 2009,” Lambert explained.

“And, on the back of this visit, we are now preparing a proposal for a new deal which will hopefully be even more valuable – for both parties.

“I hope we will be able to look back on this event in, say, five years time with more courts, more junior involvement – and greater participation by our players in international events. And one of the most important things is more coaches – that’s so important,” concluded Lambert.

Andrew Shelley, CEO of the World Squash Federation, was delighted with the success of the latest Ambassador initiative: “When you travel to countries where the squash playing communities have such passion to spread the sport – and in the case of Malawi overcome challenges as basic as equipment – the WSF Ambassador Programme visits can be very humbling. We can do so little in comparison.

“However, it has been hugely enlivening too. From the refereeing and coaching workshops in Malawi, along with the play and media activities there, to the communities of Walvis Bay, Swakopmund and Windhoek in Namibia, there was nothing but enthusiasm and excitement.

“The word ‘Ambassadors’ is in the scheme title, but it couldn’t sum up Nicol and Mohamed better. Throughout a gruelling schedule, they played, smiled, gave of themselves and won new legions of fans. They weren’t paid fees, but certainly earned huge respect.

“These visits help hosts to seed the ground in their countries; the lasting impression is that what they have planted will grow and flourish.” 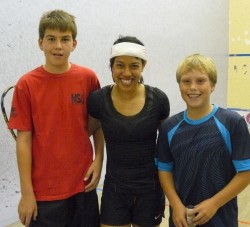 Nicol David, a 28-year-old ‘veteran’ of international promotional initiatives in the sport, was as uplifted as with the first time: “Seeing the joy on the faces of all the people we met in Malawi and Namibia made it all so worthwhile. It’s so rewarding to be able to be able to give something back in the sport I love.”

El Shorbagy, an Ambassador for the first time, was delighted to have been part of the team: “It was a great experience for me to meet different people and different cultures and discover what they know about squash. 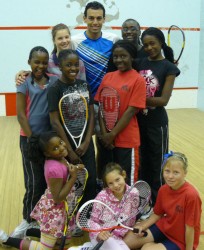 “It was something new for me: I always wanted to do something like this, to promote the game, and I am really grateful to the WSF for choosing me to work with Nicol – and I hope it won’t be the last time for me!

“Working alongside Nicol has been really special. I only knew her as a squash player – a great player – but now I’ve got to know her as a person and she’s a great person as well. Seeing the way she handled herself and talked to people was really inspiring – I really learnt a lot from her. I’m just glad the player working with me was someone like Nicol.

“It was great to see the Malawi and Namibia squash people wanting to take the game to a new level.

“And it was really interesting to see what’s happening in Namibia, where they have such a strong sponsor like Trustco, which obviously really helps. It what every squash organisation could benefit from.”