The World Squash Federation’s inaugural WSF Ambassador Programme to Latvia last week was hailed as an “inspiration” to the country’s squash community at the end of the three-day visit to the Baltic country’s capital Riga featuring leading international players Nicol David and John White.

Just weeks after winning a record sixth World Open title, Malaysia’s Nicol David – who has topped the women’s world rankings since 2006 – joined Scotland’s former world number one John White, now the Director of Squash at Drexel University in the USA, at the event hosted by the Latvian Squash Federation at the eight-court Zelta Bowling and Squash Center. 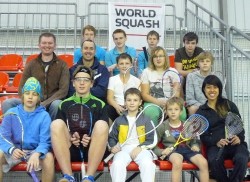 The players met and hosted coaching sessions for the Latvian national senior and junior men’s and women’s squads, and entertained enthusiasts to a series of exhibition matches.

“The WSF Ambassadors were a real inspiration to the Latvian squash community – the impact of Nicol David and John White’s visit to Riga will be remembered for years to come,” said Alex Pavulans, the Latvian Squash Federation chairman who is also the country’s top-ranked player.

“It’s been a rare opportunity for Latvians – especially our juniors – to see Squash at this level, as well to have the chance to share a court with two of the sport’s top international stars.

“The media interest the visit has attracted has been a fantastic boost for Squash in Latvia – and we hope that we will be able to build on this with our domestic championships in the future.  We would like to be able to stage a Tour event here soon – perhaps a women’s WISPA event.

“Furthermore, we hope that the widespread interest this has generated will enable us to attract funding from our sports ministry.” 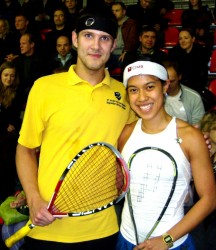 The visit also attracted enthusiasts from neighbouring Baltic countries Estonia and Lithuania, as well as from Russia.  After reading about the initiative on the WSF website, Lithuanian No1 Mantas Kociunas drove 300 km from the capital Vilnius to attend the event.  A member of the SEB Arena, one of only two clubs in Lithuania, Kociunas is one of 500 active players in the country, 100 of whom are in the ranking system.

“Playing Nicol was awesome,” said the top Lithuanian.  “She was in total control of the match, didn’t make any mistakes.  I want to improve, and already watch the best on SquashTV.”

The SEB Arena is a thriving squash venue in Vilnius.  “All five courts are currently fully booked from 8am through to 11pm each day,” explained Lithuania Squash Federation President Edvinas Dovydaitis.  “We want to use this momentum to build more courts, and are currently looking for a location to build a new club.” 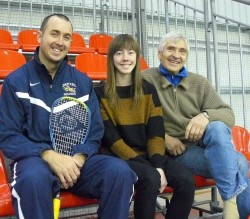 One notable attendee at Zelta was Liene Rieba, the Latvian U17 No1 who lives in Madona, 165 kilometres from Riga.  The small town boasts just one court – built over ten years ago by Voldemars Svilans in his own house.  “My dad introduced me to squash and I love it.  I couldn’t wait for the chance to play with Nicol and John – it is the most exciting thing I’ve ever done.  I love winning – I am going to play in a European event in Prague in January and I definitely want to win it!”

White was impressed by the Madona teenager:  “Liene is clearly very keen and went for everything when we played.  She certainly has potential.”

One of Latvia’s most promising players is 19-year-old Ineta Mackevica, the former national junior champion who is recovering from a stress fracture injury.  Now studying for a Civil Engineering degree in Riga, Mackevica is keen to move abroad to enhance both her squash and studies.  “Playing a world champion like Nicol was a fantastic experience.  I hope I will soon be back to full fitness.” 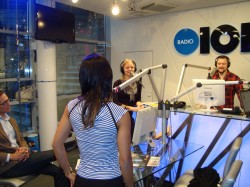 After interviewing Nicol at Latvia’s Radio 101 station, journalist Zane Peneze was delighted to be invited along to the Zelta centre to face the Malaysian again – on court!  “I am keen to play more squash – I can’t believe my luck that I was able to have a game with a six-time world champion.  I’m so pleased – I managed to get two points!”

Both White and David enjoyed their Riga experience.  “It’s good to come to a new country and see the enthusiasm for squash that has been nurtured by a handful of enthusiasts,” said Australian-born John White, the 38-year-old winner of 13 Tour titles and runner-up in the 2002 World Open.  “I hope they will be able to build on this experience.

“But also very significant here were the coaching and refereeing courses run by Ronny and Ian – and it was excellent to see so much support for those.” 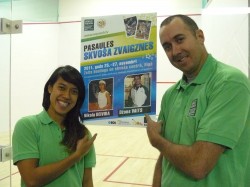 Nicol David, a 28-year-old veteran of a number of similar sorties to new countries, ‘spreading the word’ about squash, was equally upbeat:  “This visit has certainly been an eventful one for squash in Latvia. The coaching and refereeing workshops, alongside some clinics, games and exhibition games with John, has given Latvia and other neighbouring countries like Lithuania and Estonia a chance to grasp squash as a whole package much better through the period.

“It was very encouraging seeing the enthusiasm on the faces of the squash players as they watched and learned more about squash.  Truly a successful time, with thanks to the Latvian Squash Federation who hosted us so well.

“I look forward to some upcoming stars from Latvia in the future.” 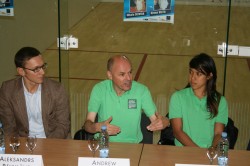 WSF CEO Andrew Shelley summed up the success of the first Ambassador Programme visit:  “The sheer enthusiasm of the players, young and old, coupled with the workshop attendees was enough for us to know that the WSF visit to Latvia had been a roaring success – from the players who came from the cluster of countries and got on court with Nicol and John; to those who took part in the invigorating and enjoyable workshops given over two days by Ian Allanach and Ronny Vlassaks; from the media interest and coverage; and from the enthusiasm and all the feedback.

“We are indebted to the players and workshop managers who gave their time freely and free,” Shelley continued.  “The WSF group had the opportunity to meet enthusiasts from all over the Baltic region – and to talk to the Latvian Olympic Committee visitors who knew of our short-listing for the 2020 Olympic Games and wanted to see the activities personally.

“But this was only the start of what we hope will be a long-term link as the sport flourishes under the efforts and initiatives of the Latvian Squash Federation.  Great people and great hosts.”