Malaysia’s Nicol David has been named WSA Heather McKay Player of the Year for the 7th time following a presentation at the Cleveland Classic quarter-finals night.

David, who saw another immaculate year as the world’s No.1 player, was just one title win short of claiming a clean sweep in all World Series events in 2012, culminating in her seventh World Open title.  The award, one of many rebranded accolades this year, is named after a legend of the women’s game, Heather McKay, who was a dominant force on the Tour throughout the 70’s and 80’s.  David’s achievements last year made her the top candidate for the award. 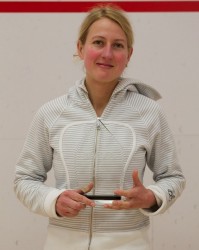 Alison Waters received the Vicki Cardwell Comeback Player of the Year 2012 after an impressive return from a year’s layoff saw the English 28-year-old start the year at No.39 and claim five titles on her way back up to the world’s Top4.  This award is brand new for 2012, and marks a players remarkable resilience to return to top form following a lengthy absence.  Cardwell herself took time out from the game to have a baby, before making a return to the top of the game.

Seventeen-year-old Nour El Sherbini burst into the upper echelons of the WSA world rankings in 2012, leaping from No.28 in January 2012 to peak at No.5.  The prodigal Egyptian reached the British Open final at the O2 Arena in London in May, and in acknowledgment to her excellent efforts has been appointed the Breakthrough Player of the Year 2012.  Sherbini said after being told of her award: “I would to thank the WSA and all the others involved in the voting.  This is certainly something that adds more pleasure to the game and I am very glad to have won it.”

Samantha Teran’s services to squash did not go unnoticed last year, as she is honoured with the Platinum Service Award 2012.  Also a new award, The Platinum Service Award celebrates a player’s dedication and service to the sport, not just for the past 12-months, but over a number of years.  The Mexican has been busy both on and off the tour, helping to raise the profile of squash in her home country, as well as opening a new squash club and founding the Abierto Mexicano de Raquetas event in Toluca, which she was unfortunately forced to withdraw from through injury.  Teran thanked the panel, stating that it was her love for squash and her country that inspired her involvement in 2012, and that she was very honoured to receive the award.

The new Sportsmanship Award was awarded to Samantha Cornett for her commitment to fair play and keen spirit both on and off court.  Cornett was honoured at last week’s WSA Silver Tournament of Champions event at Grand Central Station, New York City.

The WSA Cayman Islands World Open 2012 was deemed the first ever Tournament of the Year as the culmination of the WSA’s calendar in December 2012.  Voted for by the players alone, the event, run by Dan Kniepp, was regarded as highly successful and well-run throughout the week, and all competing players had only positive things to say when reporting back.  The Cayman Islands National Squash Association were honoured to received the award, stating that is was a joy to host the magnificent event and that they look forward to hosting more events in the future.