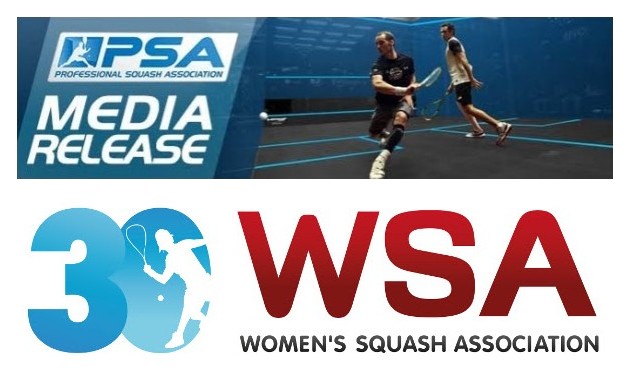 Following a lengthy consultation process involving the sport’s major stakeholders over the past ten months, which included inviting both memberships of the PSA and WSA to vote on the proposed merger, a decision was reached on Monday October 28 that will see the Professional Squash Association operate as the governing body for both the women’s and men’s ranks from January 1, 2015.

Continuing to operate under the existing PSA name, the re-formed organisation will be responsible for running the men’s and women’s professional game with the strategic aims of increasing the level of equality and parity in prize money and playing opportunities across the sport.

“We have been in discussion with the WSA since the beginning of 2014 regarding a potential merger between the two associations,” said PSA Chief Executive Alex Gough.

“Both parties felt that a merger would provide a more unified base from which to grow the sport of squash across the globe and to proactively increase the levels of opportunity for both genders at the elite level.

“Our ambitions are to drive the sport forward as a whole, increasing the total prize money available for both men and women in squash and in doing so, delivering increased opportunities for women to earn the same financial rewards as their male equivalents and we have longer-term plans in place to move towards a position where we can achieve parity in prize-money.

“We also feel that a unified body will allow us to present a more appealing product to potential sponsors and broadcast partners and we look forward to undertaking the new challenge when the cross-over period is completed in what will be an exciting new era for the sport.”

As a result of the merger the WSA will now begin a wind-down process, set to be completed by December 31st 2014, when squash will usher in an exciting new era of joint-responsibility and unified governance.

With the Delaware Investments US Open leading the way in driving the equality-agenda within the sport, having moved to a position of offering equal prize money for the first time in 2013, the long-term aims of the PSA will be to increase the overall level of prize money available in squash and narrow the gap between genders.

“The WSA members are very excited to merge with the men and form one unified governing body for professional squash,” said WSA Chief Executive Tommy Berden.

“Over the past ten months we have been able to discuss in depth how the merger will benefit our sport and we really feel this is the right time to move things forward for both the men’s and the women’s tours.

“It’s encouraging to see that more promoters are following the example set by the US Open to pay equal prize money and we are expecting more events to follow suit in the upcoming year.

“The response from both memberships has been overwhelmingly positive and we are looking forward to starting the transition phase to unify the two associations.”