Despite battling against each other over the past week for the title of ‘world junior squash champion’, the world’s leading teenagers competing in the WSF World Junior Championships in Poland are unequivocally united behind the sport’s bid to join the Olympic Games programme in 2020. 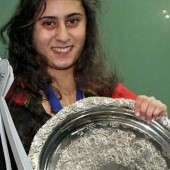 “It would be a dream come true,” said Nour El Sherbini, the 17-year-old Egyptian who made squash history on Sunday by becoming the first player to win the world junior title for a third time.

“There are still seven years left, but I hope I will be at the top of my game by then and will have a chance to show that at the Olympics,” added the remarkable youngster who is already ranked 11 in the world.

More than 160 players from a record 37 nations have been competing in the 2013 championships at the spectacular new 19-court Hasta La Vista Club in Wroclaw – the event’s first staging in Poland.

The championships have already ensured their place in squash history: The top eight seeds in the men’s event hailed from seven different nations and four separate continents – with 16-year-old Diego Elias the event’s first ever representative from Peru.

Elias went on to reach the quarter-finals, where he was joined by Abdulla Mohd Al Tamimi from Qatar and Yousif Nizar Saleh from Kuwait – all three marking firsts for their countries in the last eight round. Al Tamimi achieved further notable success for Qatar by making the last four.

Without a gold medal in the Games since 2004, Egypt laid a powerful claim on a first Squash Olympic Games gold medal in 2020 by winning both the men’s and women’s world junior titles in Poland.

After the players joined together for a picture to show their united support for the sport’s 2020 Olympic Games bid – all of whom would be at their peak in 2020 – several spoke out to endorse the Squash campaign. 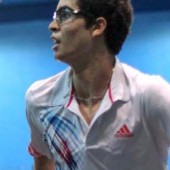 “Peru has never won an Olympic Gold medal and I want to be the first!” said Diego Elias. “There are many courts in Peru and for players to see squash in the Olympic Games will be great for them.” 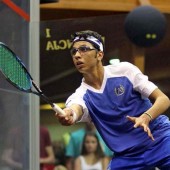 Qatari Abdulla Mohd Al Tamimi added: “Everybody dreams to play in the Olympics. If we are given a place I will be at my best age in 2020, so it would be wonderful.

“In Qatar, being in the Olympics will bring more people to squash, and everywhere else as well. Squash will get even bigger I am certain.”

Salma Hany Ibrahim, a 16-year-old Egyptian who reached the women’s quarter-finals, said: “It’s a huge thing to play an Olympic sport. It would really mean a lot to get squash into the Olympics.”

England outsider Lyell Fuller, a 17-year-old who became the only unseeded player to make the quarter-finals, added: “It’s my dream to play in the Olympics.”