More than 40,000 players registered to take part in the World Squash Day Challenge, which demonstrated global support for the sport’s 2020 Olympic bid.

More than 800 clubs from over 70 nations joined in, with players representing Team Squash and Team 2020. 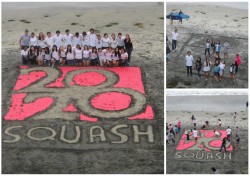 A delighted World Squash Federation (WSF) Chief Executive Andrew Shelley said: “It was wonderful to see the worldwide squash community come together in one massive match. It clearly illustrated the passion the whole sport has for squash’s Olympic bid, as well as promoting squash at national and local level.

“Clubs are currently uploading their results, and the total is already close to 25,000 players, so we feel justified in claiming the record for the world’s biggest competitive sports match on that figure alone. By the time the rest have done so, we will have a fantastic, verifiable figure.

“These 2020 figures really illustrate how much players of all abilities care about seeing Squash in the Olympic Games,” Shelley added. 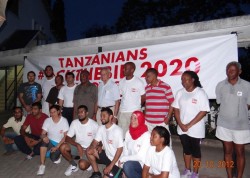 World Squash Day founder Alan Thatcher said: “Hundreds of pictures have been uploaded to the WSD website and Facebook page showing large numbers of happy, smiling people doing what they love best, enjoying the thrill of playing one of the world’s most physically-demanding sports.

“The pictures also showed the lifelong friendships, great sportsmanship and sheer fun that this game delivers.

“Perhaps some of the after-match parties went on too long and clubs forgot to post their results!

“It was heartening to see so many of the world’s leading players supporting the event.” 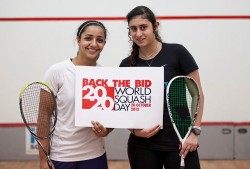 Women’s world champion Nicol David set a great example. The Malaysian cycled round her home city of Amsterdam to visit every squash club, and also waved banners outside some of the city’s most iconic buildings.

Other former world champions, including Australians Vicki Cardwell and Michelle Martin, joined the action as more than 50 clubs participated Down Under. 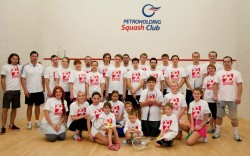 One of the biggest events took place at the Tanglin Club in Singapore, where they joined forces with the British Club and Hollandse Club to stage 188 matches.

A 24-hour marathon in Slovenia attracted more than 300 players; 334 matches took place over 15 centres in the Czech Republic; and Gravelines in France featured 122 competitors. Results were also posted from Zimbabwe, Peking University in China, and from various clubs in the Caribbean.

Around 750 youngsters from the inner-city of Johannesburg, townships of Soweto and Alexandra – among numerous around the world who would benefit from Olympic inclusion beyond 2020 – had a fun-filled day as they joined the rest of the world in celebrating World Squash Day through their annual Egolisquash Festival.

A huge event in Hong Kong was followed by a flash mob dance in the heart of the city, which attracted national media attention.

Upwards of 150 clubs were involved in England, with big numbers also recorded in Canada, USA and throughout Asia andEurope.

There was a raft of messages of support, including one from double Olympian Dame Kelly Holmes, while WSF President N Ramachandran summed up his delight by saying:

“Our sport cares about promoting itself. It cares deeply about our Olympic aspirations and developing and innovating. World Squash Day is a superb illustration of this.”