Squash’s bid for a place in the 2020 Olympics receives a massive boost on Saturday (20 October) when some 40,000 players are expected to take part in a massive worldwide competition on World Squash Day.

The biggest fixture in the history of the sport has a 2020 theme as World Squash Day is dedicated to supporting the World Squash Federation  bid for a place in the 2020 Olympic Games.

More than 750 squash clubs all over the world – representing 72 nations from Argentina to Zimbabwe – will be taking part in the World 2020 Challenge. Each club will field two teams of 20 (often more) representing Team Squash and Team 2020.

Fitness, stamina and skill will be put to the test as players compete in each individual tie, playing one game up to 20 points. Each club score will count towards an overall global result.

As well as clubs large and small, the world’s leading professionals – led by England’s James Willstrop and Nick Matthew, the world’s number one and two, respectively – are backing the bid with a special World Squash Day event taking place during the new PSA NetSuite Open in San Francisco, USA, on Saturday.

“There is a heart-warming contrast in so many of the clubs taking part, from small buildings located in rural locations to plush, city-centre clubs.

“It’s very encouraging to see that these clubs are showing such passion to support the bid and are doing so on court – not only primarily promoting squash locally but also demonstrating all the positive attributes that squash can bring to future Olympics.”

UK Minister for Sport Hugh Robertson added his support, saying: “I’m delighted that so many people will be taking part in World Squash Day this Saturday. This shows how popular squash is in many countries.”

WHERE IT’S ALL HAPPENING:

More than 50 events are taking place across Australia, plus many more in New Zealand, where The Datsuns’ drummer Phil Buscke, a keen squash player, is throwing down a challenge to members of the All Blacks rugby team to get on court. Four years ago, Buscke publicised the previous Olympic bid with a televised bungee jump off Auckland Harbour Bridge.

Across North, South and Central America, competing nations include Argentina, Brazil, Canada, Colombia, Costa Rica, Ecuador, Mexico, Peru, and USA. World Squash Day activities will feature in the new men’s PSA World Tour event in San Francisco, where a 20-up College Challenge will take place on the glass court by the San Francisco waterfront between Stanford University and California University-Berkeley and University of Southern California.

For all the latest updates, and to record and view progress

of all the matches and events, visit 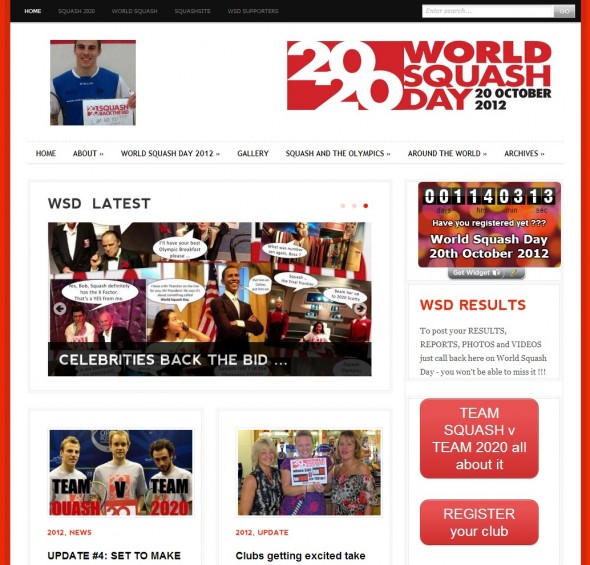