Leading figures from the world of Squash are hailing the success of Amanda Sobhy, the US teenager who this month became the first 16-year-old to win four WISPA World Tour squash titles.

Just two weeks after upsetting the top seed in the final of the Racquet Club International in St Louis in April to clinch her third Tour crown – thereby overtaking Malaysia’s reigning world number one Nicol David‘s two-title record established as a 16-year-old in July 2000 – New Yorker Sobhy went on to claim the New England Open trophy in Massachusetts. 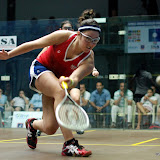 Sobhy’s earlier success took her to a career-high world No39 ranking in the May WISPA list – and further progress can now be expected in the June rankings.

And the left-hander, who is coached by her father Khaled Sobhy at The Creek Club in New York, still has more than a month to go before celebrating her 17th birthday (on 29 June)!

“After seeing Amanda here last year in Amsterdam during the World Open, with great results, it’s obvious she has that extra something to beat the top girls even at such a young age,” said Nicol David, the 26-year-old from Penang who has topped the women’s world rankings since 2006.

“She is one of the rare squash players that naturally has an all-round squash sense and amazing timing on the ball. I’m sure with her father’s experience it transfers – while her determination to excel certainly shows when she competes. She has proven that by winning WISPA tournaments already at 16 years old. There will be a lot more coming her way.”

Former world number one Natalie Grainger, the WISPA President and Principal and top-ranked player in the USA, added: “Amanda is a striking player and someone to watch out for! I first saw Amanda play when she was 12 and came to T-Position squash camp, and it was obvious then that she was a talented little girl, with the Egyptian flair of her father, Khaled, a squash player and coach himself. 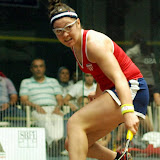 “I have enjoyed being involved with her squash a little and seeing her develop into the attacking, powerful and exciting player that she has already become at such a young age,” continued the world No12. “She has drive, commitment and a great attitude towards competition. I am extremely excited about the standard of junior squash in the United States, with Amanda and Olivia Blatchford leading the pack, they will both be representing the National team this year in New Zealand I am sure.”

Sobhy herself pays tribute to her father: “He was the person who got me into squash at the age of 12. He used to be one of the top juniors in Egypt and then made it into the top 30 in the world back in his day. Squash has always been a huge part of his life and he continued the sport when he came to the US and taught it to my older brother Omar, me and my younger sister Sabrina.

“Without my dad hammering me day after day with brutal workouts and non-stop squash, I would never be at the level that I am at today. As much as I don’t want to work that hard some days, I must thank my dad for putting up with me all these years!

“When going into the St. Louis tournament, trying to win it in order to make history wasn’t even on my mind,” added the latest WISPA star. “I didn’t even care if I won it – I just went out there and played. If I won, great; If I didn’t, that’s OK. 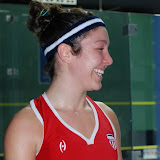 “However, after I won my third WISPA title, the realisation of me making history as the youngest player ever to win three WISPA titles at the age of 16 finally hit me. All I could say to people for the next week was that I just made history. It was the most amazing accomplishment ever because my name would go down in the books for ever, and no one can take that away from me.

“Also it was a great way of getting recognised and getting my name out in the open. As squash is a relatively minor sport in the US, it was great when local newspapers in New York wanted to do an article about my accomplishments.

“Although I just made history, there are still further goals to achieve. I’m working hard to try to win the World Juniors at the end of June, and also there’s always my goal of trying to improve my WISPA ranking each month,” Sobhy concluded.

Kevin Klipstein, the CEO of U.S. Squash, added: “U.S. SQUASH is very proud of Amanda and what she has managed to accomplish. Becoming the youngest player to ever win four championships on the WISPA Tour certainly put her on the global squash map. This success is a tribute to her hard work and dedication and an indicator of the increasing strength of junior squash in the United States.

“Since Amanda is also a U.S. SQUASH Scholar-Athlete, she is a great role model for other junior players in the US, not only on the court, but also in the classroom. We look forward to continuing to support her meteoric rise on the international stage as she, along with Olivia Blatchford, lead the United States contingent at the Junior Women’s World Championships this summer.”