Ninety five of the world’s best hardball doubles players from 19 countries across the globe converged on New York to compete for the 2013 World Doubles Championships title.

The tournament saw home heroes Amanda Sobhy and Natalie Grainger take out the World Doubles women’s championship, Aussie all-star team Damian Mudge and Ben Gould added another trophy to their impressive collection in the men’s division, and another Australian victory by Paul Price and Narelle Krizek in the mixed division.

The American partnership, who just weeks ago played against each other for the individual title of National Champion in the 2013 U.S. National Championships women’s final, were this time competing as a doubles team together against the Canadian pair, who were defending champions of the 2012 World Doubles women’s title. 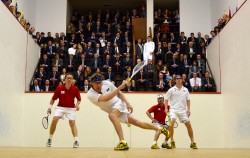 In the men’s division top seeds and defending champions Damien Mudge and Ben Gould cruised through two three-nil wins to make their way towards another championship final, beating US team Christopher Callis and Alex Domenick in the first round followed by South Africans Regardt Schonborn and Jacques Swanepoel in the round of 16.

They next won two four game matches in the quarterfinals and semifinals, against eighth seeds Imran Khan and Baset A. Chaudhry of Pakistan and USA’s Preston B. Quick and Gregory O. Park, to make their way comfortably into the championship final.

An upset in the semifinals saw second seeded men’s team Matt Jenson and Paul Price of Australia stopped in their tracks on the way to the final.  Things were looking sweet for the pair after they cruised through solid three-nil wins in all of their first three matches against South Africans Michael Koep and Brett A. Erasmus in the first round, Swedish team Gustav Detter and Anders Wahlstedt in the round of 16, and Canadians Freddie Reid and Viktor Berg in the quarterfinals.

However the strong partnership of Jonny P. Smith and Clive I. Leach of England was too much to tackle, as they defeated Aussies Ryan Cuskelly and Dan Jenson, Canadians Carl J. Baglio and Ian T. Power and Aussies Raj Nanda and Mark Price to set up the crushing semifinal match against Jenson/Price.

In the championship final, all-star team Mudge and Gould, who have dominated the pro doubles scene since they teamed up in 2010, defeated Smith and Leach in three breathtaking games to take out the Kellner Men’s Open division of the World Doubles tournament 15-8, 15-9, 15-9 and add another trophy to their impressive collection 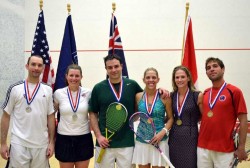 The mixed finals played out between Australian team Paul Price and Narelle Krizek and US team Preston Quick and Natalie Grainger, with the Aussies crowned the Richmond Mixed Open World Doubles champions.

The match saw last year’s defending champions compete against one another in the final, as last year the championship was won by Quick and Krizek together.

The intense four-game match fell smoothly in favor of the Aussies in the first two games, 15-7, 15-6, but Quick and Grainger climbed back in the third from 10-6 down to take the game 15-10. However the Americans narrowly missed out on evening up the stakes in the forth, going down 15-13 in a nail biting finish to the match.