There were no upsets in the first day’s play of the PSA&WISPA  World Series Cathay Pacific Sun Hung Kai Financial Hong Kong Open, which saw top seeds Nick Matthew and Nicol David safely through, but two of the four Englishmen to pregress didn’t have it all their own way …

In an early match on the opening day of the 25th staging of one of the most popular events on the PSA World Tour, third seed Willstrop brushed aside fellow countryman Jonathan Kemp 13-11, 11-6, 11-5. The 24-minute win extended the world number three’s career-long unbeaten Tour run over Kemp – but avenged Willstrop’s shock defeat by the left-hander in the British National Championships nine months ago.

In the day’s final encounter, top seed Nick Matthew continued where he left off after clinching his second successiveWorld Open title in Rotterdam earlier in the month by despatching New Zealand qualifier Martin Knight 11-6, 11-4, 11-7.

But both Barker and Selby were taken the full distance as they battled against lower-ranked opponents in Hong Kong. Sixth seed Barker faced Dutchman Laurens Jan Anjema, the highest-ranked unseeded player in the draw.

Selby now faces Matthew for a place in the quarter-finals, while Barker takes on Australian Cameron Pilley and Willstrop the rejuvenated Finn Olli Tuominen.

Pilley removed the only Hong Kong interest in the men’s draw with a four-game win over the well-supported Max Lee. The 23-year-old Hong Kong national champion gave the crowd brief hope by taking the third game convincingly – but the tall Australian soon put paid to that, winning 11-2, 11-8, 3-11, 11-6 in 44 minutes.

Tuominen was the first player through to round two following a straight-game win over qualifier Borja Golan. Tuominen started at his usual ferocious pace, and although the Spaniard matched it at times, he suffered from too many unforced errors, particularly at the start of the third as he, much to his own annoyance, virtually gifted the Finn a 5-0 lead and there was no coming back from there.

Julian Illingworth, the sole US competitor in the championship, put in an impressive performance against Gregory Gaultier, winner of the last World Series event in Qatar. The record seven-time US national champion took the third game convincingly, but fifth-seeded Frenchman Gaultier closed out the match after 65 minutes, winning 11-6, 11-6, 9-11, 11-3.

All seeds safely through

All seeds safely through in top half 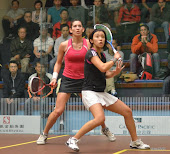 The Japanese qualifier led in each of the first three games but King’s more powerful game brought her back, taking the first two and getting matchball at 10/9 in the third.Kobayashi stuck in though, and at 11/10 served into the nick to pull a game back. She also had game ball in the fourth but this time it was King who finished stronger to take the match.

“I just didn’t feel comfortable out there,” admitted King, “the racket felt heavy, nothing was really working and I was letting it get to me.

“That was a tougher first match than you’d want but you know these days you can’t take anyone for granted and she played well. ”

Kobayashi was happy enough: “It was a good match I thought, especially since I didn’t get a chance to practice on the glass court. You have to go for your shots on their, it’s quite cold and dead, and I missed a couple of shots at the end of the fourth, but overall I’m happy with how I played.”

King’s next opponent is local favourite Annie Au, whose touch shots, experience of the court, and support of the crowd were all factors in her straight-game win over Gaby Huber.

“I don’t mind playing Annie,” said King. “The crowd will be for her, and she’s not number seven in the world for nothing, but I’ve won most of the times we’ve played so I’m looking forward to a good match.” 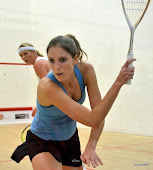 A second Kiwi win as Jaclyn Hawkes beat former Hong Kong finalist Tania Bailey in straight games, although the Englishwoman had game balls in the second and led the third 8/6 before going down 11/3, 12/10, 11/8.

“Tania was one of the hardest draws you could get,” said Hawkes, “we all know how good she is, so I’m really happy to get through that one in three. I’m glad I played on the upstairs court, it suited my game.”

She’ll meet Rachael Grinham, the most experienced Hong Kong campaigner of all, who had an easy passage after Latasha Khan, still suffering from an injury sustained last week in Macau, retired after a 5-minute first game.

The crowd noisily greeted young qualifier Tong Tsz-Wing onto court for her match with six-time Hong Kong and World Open champion Nicol David, and the youngster promptly took the first two points to allay any fears of annihilation.

At match ball down Hansen was stranded at the front, waving her racket in submission. Urquhart, still in the zone, slammed the ball crosscourt right at said racket, but when the ball bounced back to her, much to the amusement of the crowd and her opponent, she didn’t make the same mistake again as she put the ball away to finish the match.

The final two matches saw two seeds progress at the expense of qualifiers, and while Laura Massaro and Delia Arnold both won in straight games they were very different matches. Player of the Year Massaro was comfortable enough in beating Olga Ertlova 11/3, 11/4, 11/7, but Arnold, after taking the first 11/2, had some trouble seeing off France’s Coline Aumard, who had game balls in each of the next two games which Arnold won 12/10, 12/10.

“I don’t think she was properly warmed in in the first,” explained the Malaysian, “she played much better in the next two and it was pretty rough on there, with way too many lets, so I’m very happy to get through in three games.”
WISPA  World Series Cathay Pacific Sun Hung Kai Financial Hong Kong Open