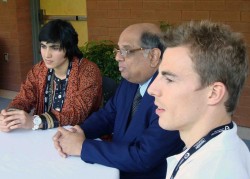 As well as holding meetings with the International Olympic Committee and IOC members, the WSF also exhibited inflatable squash courts which are becoming increasingly popular as a way to encourage children to try squash at schools or in public places.

President Ramachandran said: “We have had some very constructive discussions with the Olympic Family in the last few days and there has been real interest in learning about the innovations professional squash has been introducing – such as super slow mo replays, high definition broadcasting, multiple camera angles, and experimenting with LED lighting under glass floors.

“It was also great to see so many children taking part in our squash demo on inflatable courts – a cost effective and accessible way to introduce the sport to young people,” added the WSF President. 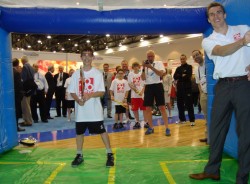 Nick Matthew, the world number two who last week became the first Englishman in the 82-year history of the British Open to win the world-famous title for a third time, said: “Squash is on an exciting journey, both as a sport that is evolving but also in our ambition to become an Olympic sport. It would be the absolute pinnacle for me to compete at an Olympic Games.

“Squash is moving with the times, embracing change – but still retaining a gladiatorial essence. It’s chess at a million miles an hour; a great test, both mentally and physically.”

Maria Toor Pakay, who also made British Open history at London’s O2 Arena by becoming the first Pakistan-born woman to compete in the event’s main draw, added: “My dream is to play in the Olympic Games and to inspire other Muslim girls and women to take up Squash. It’s a perfect sport.” 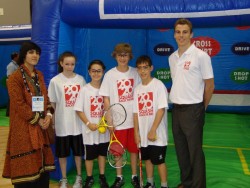 Maria’s journey has been a tough one: “I come from a tribal area of South Waziristan and education is hard to get. Fathers don’t want girls to go out and get into trouble – so squash, which is big in Pakistan, was good, but girls didn’t play.

“I started and it has given me great opportunities. But I got death threats from the Taleban and my dad asked if I really wanted to keep playing. As I did, we left. I had to play in my room for three years, hit the ball against the walls – but I did get third place in the world juniors somehow.

“I wrote thousands of emails and eventually Jonathon Power arranged for me to come and train with him in Canada in 2010.

“I was the lucky one, given a chance by my father – and now my dream is to play on the Olympic platform to inspire and encourage other girls,” concluded the 21-year-old.

In July 2011 the International Olympic Committee agreed on a shortlist of sports that will be considered for inclusion in the sports programme of the 2020 Olympiad. The sports are: baseball, karate, roller sports, softball, sports climbing, squash, wakeboard and wushu, one of which could be added to the 2020 sports programme to be voted on by the 125th IOC Session in Buenos Aires in 2013. 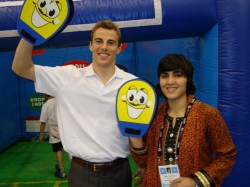 Nick Matthew recovered from career-threatening shoulder surgery to top the world rankings throughout 2011. The 31-year-old from Sheffield won two gold medals in the 2010 Commonwealth Games in Delhi and the following year became the first player for 15 years to successfully defend the world championship crown. The record-equalling four-time British national champion claimed his 24th Tour title at the British Open earlier this month in London.

Maria Toor Pakay won her first Pakistan national title in 2007 without dropping a game – aged just 16. Her international career took off after coming under the wing of Canada’s legendary Jonathon Power, North America’s first world number one, less than two years ago. In January this year, the 21-year-old clinched her maiden Tour title at the Liberty Bell Open in Philadelphia – as a qualifier!