James Willstrop collected his fourth Canary Wharf Classic title with a stunning display of quality squash to subdue his England team-mate Peter Barker in the final of the PSA World Tour International 50 event at East Wintergarden in London.

The No4 seed from Essex had produced an outstanding performance to beat reigning champion Nick Matthew in the semi-finals, but he was unable to repeat that level of consistency against Willstrop, the world No4.

Barker launched a ferocious attack at the start of the match, winning the first four points, but once Yorkshireman Willstrop  found his rhythm and length he began to dominate the tenth anniversary final of this sell-out London tournament.

From 5-2 down Willstrop won four points in a row and from 7-7 he controlled the closing phase of the game to win 11-8.

The No2 seed from Leeds looked strangely subdued as he failed to maintain that level of consistency in the second game. 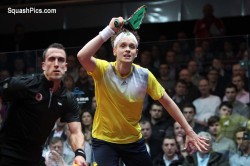 London-born Barker made fewer mistakes and his high-paced driving had the 6ft 4in Willstrop in all sorts of trouble, twisting and turning uncomfortably.

However, that was Barker’s last moment of supremacy as Willstrop reached his peak. Playing supremely accurate squash, his drives clung to the side walls and his drop shots found their targets at the front of the court.

Willstrop even had time to throw in a few attempts at matching the amazing triple-fake shot he produced in the recentDavenport North American Open and launched an internet sensation.

He won both the third and fourth games by an 11-4 margin to clinch a fourth title in his sixth final at a packed East Wintergarden. It was the first final in the tournament’s history to be concluded in less than an hour. 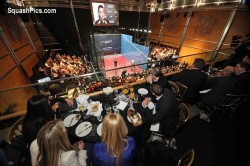 While the majority of the London crowd may have been cheering for local favourite Barker, they acknowledged the sheer mastery of a sporting genius playing squash of a phenomenally high standard.

Willstrop, who won the very first Canary Wharf final against Frenchman Thierry Lincou as a 20-year-old in 2004, was delighted to claim his first PSA World Tour title since beating Egypt’s Ramy Ashour in the final of the North American Open in February last year.

After receiving his trophy from the Canary Wharf Group company secretary, John Garwood, he said: “Winning titles at this level is getting harder and harder – the effort you need to put in is immense. 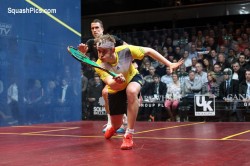 “This is one of my favourite venues – I love playing in the Canary Wharf Classic,” added Willstrop, who has played in every event since 2004.

On his opponent, Willstrop said: “It’s incredibly tough following a win like he had last night – any win against Nick is like winning an event!

“But he didn’t show any signs of it today. It was really tough. He made the court very long and hit the ball into all the spaces.

“I got a good start in the third game, which was very important,” concluded Willstrop, who now boasts his 17th title on the PSA Tour.

Barker, asked how well his opponent had played, said: “Much better than me, that’s for sure! You saw tonight just how good a player James is.

“It was a good win for me last night but I couldn’t back it up.” 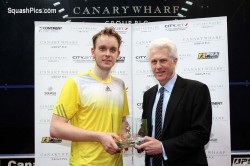 During the presentation ceremony, Mr Garwood said: “That match, and the quality of the squash we have seen all week at Canary Wharf, demonstrates why squash should be in the Olympics instead of a sport like golf.”

His feelings were echoed by BBC sports presenter John Inverdale, who was in the audience. He said: “Golf doesn’t need to be in the Olympics because so many leading players are ambivalent about playing.

“But there is no reason why squash shouldn’t be in the Games because it would be the peak of any squash player’s career.

“If squash can fulfil the IOC requirements of global participation then it stands a very good chance of being voted in.”