England’s world number one James Willstrop weathered a phenomenal fightback from his training partner Saurav Ghosal before clinching a place in the quarter-finals of the Canary Wharf Classic, the PSA World Tour International 50 squash event in its ninth year at the East Wintergarden in Canary Wharf, London.

The two players practice together at Pontefract and are neighbours in Leeds, but there was no room for friendship or sentiment on court as they engaged in a battle of enormous skill and brutal physical commitment. 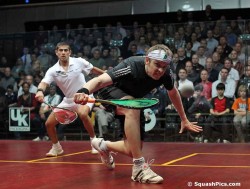 Willstrop’s superior quality ultimately delivered victory in 84 minutes of high-quality entertainment, but the Indian number one earned repeated bursts of applause from the packed crowd at Canary Wharf’s spectacular East Wintergarden venue for his never-say-die approach.

After winning 11-7, 7-11, 11-4, 10-12, 11-5, Yorkshireman Willstrop paid tribute to his 25-year-old opponent, saying: “I have repeatedly warned people in pre-tournament interviews that there are no easy matches at this level. If you step off the pace by the tiniest amount, players like Saurav will jump on the ball and punish you.

“He is so fast around the court and kept getting the ball back. His retrieving was so amazing that I could sense the crowd were getting on his side and willing him to do well.” 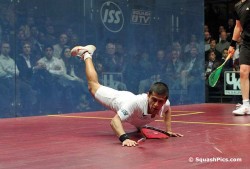 Ghosal, who has yet to beat Willstrop in a PSA tournament, held match ball against him in the WSF World Cup last year. “That match was very close but this is certainly the best I have played against him in a PSA event,” said the Kolkata-born world No25. “James is playing so well at the moment, and his straight game is so immaculate that he hardly gives you anything to hit.

“We all saw what he did to Ramy Ashour in the North American Open and he is the best in the world at that because he is so good at holding the ball. With some players you know where the ball is going, but James keeps you guessing.”

Momen said: “I guess I’m hoping James might be feeling a little bit tired after his long match tonight. I enjoyed my first-ever match against Marwan. He is one to watch for the future, for sure.” 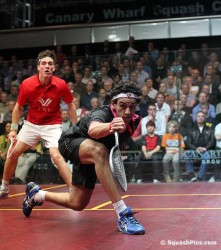 After the game, El Shorbagy senior said: “I am so pleased to be back at Canary Wharf again, playing in this fantastic venue in front of a wonderful crowd. It’s a tough draw, but I was very keen to come back and try to do my best here. 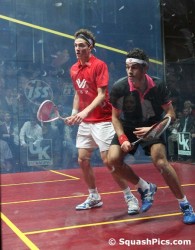 “I am living in England now so I’m hoping to get a bit of support this week,” explained the Bristol-based 21-year-old.

The crowd responded with a loud roar of approval and he added: “Life in Egypt had been very difficult under the former president for so many years and change was long overdue. We are now looking forward to some stability after the forthcoming elections.”

His quarter-final opponent, Londoner Adrian Grant, needed a strapping applied to his right leg during his match against qualifier Chris Simpson – but still had enough class and control to win the match in four games. 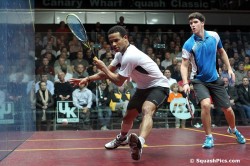 After taking the opening game, left-hander Grant was clearly struggling in a long second, which Guernsey-born Simpson won 13-11. Grant immediately summoned the England physio Jade Elias to apply bandages but he failed to allow it to upset his concentration as he won 11-7, 11-13, 11-8, 11-6 in 74 minutes.

“There was no way I was going to give up,” said world No16 Grant. “The adrenalin kicked in and I was happy to play on. I had enjoyed a session with the England coach Chris Robertson at Wimbledon on Sunday and he was encouraging me to attack more and finish rallies more quickly. I am glad he did because that tactic seemed to work on the glass court here tonight.” 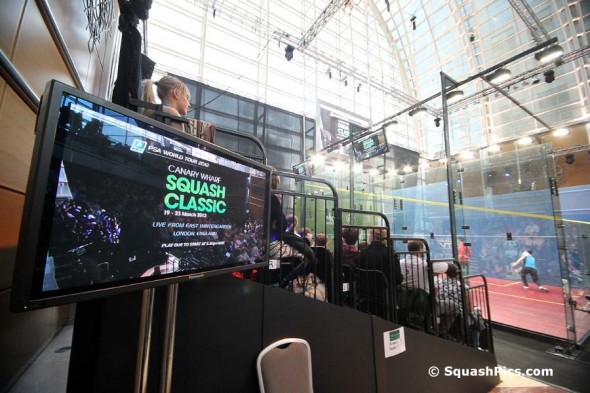