England’s James Willstrop reached the final of the biggest squash event in Europe this year after surviving an incident-packed semi-final in the ROWE British Grand Prix in Manchester today – and will now meet Egypt’s world number one Ramy Ashour for the $92,500 PSA Super Series event title at the National Squash Centre.

The Yorkshireman’s clash with Gregory Gaultier was his latest encounter with the life-long French rival whom he first competed against as a fellow 14-year-old. Leading by two games, the now 27-year-old world No6 from Leeds suffered a dead leg after an accidental collision with the Frenchman, ranked one place higher.

After a seven-minute injury break, Willstrop returned to the court and recovered from 1-5 down to lead 9-7 – two points away from a straight games victory.

But the determined Gaultier fought back to take the game – and then won the fourth to force a decider.

“When both of us are playing at the highest of intensities – which both of us were today – you can’t keep it going for five games,” explained Willstrop afterwards. “When we were good, we were very good.

“I’m just glad to have come back in the fifth.

“That third was a most bizarre game. The injury break didn’t help me – but I remember thinking at 8-5, ‘I can’t settle down’,” said the England number two from Leeds.

“It’s brilliant to be in another Super Series final,” added Willstrop, now in the 22nd Tour final of his career. “I love playing here – the crowd was incredible.”

A dejected Gaultier admitted that he hadn’t stuck to his game-plan: “I didn’t follow the tactic I wanted at the beginning. I was a bit disappointed to lose the second game.

“In the third, I think he was a bit tired and I tried to make the rallies longer. The fifth was anybody’s game.

“I am really disappointed to lose – but I will come back stronger next time,” added the former world number one from Aix-en-Provence. 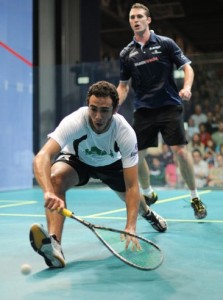 Ramy Ashour, who despatched his three earlier opponents 3/0 in little more than an hour of playing time, dropped the first game against veteran Australian David Palmer, the 34-year-old from New South Wales who is the event’s No8 seed.

Palmer, who celebrated ten unbroken years in the world’s top ten a month ago, was playing the game of his life – while 22-year-old Ashour was scurrying around the court to keep up with the former world No1 and two-time world champion.

Second seed Ashour reclaimed the upper hand in the second game, but the US-based Aussie battled back to earn four game balls in the third before his younger opponent forged a 2/1 lead.

“I couldn’t believe it – he was incredible today,” Ashour acknowledged to the crowd afterwards. “Sometimes, there was nothing I could do against him.”

On the prospect of the final, Ashour said: “James is a great player – very skilful on court. I’m sure it will be a great game.”

Despite losing, Palmer took positives from his performance: “It’s given me encouragement,” said the four-time British Openchampion. “I haven’t been able to play a match like that for the last four or five months.

“The Commonwealth Games is very important to me – and it looks as if I’m back in form. It’s better late than never!

“So I can go back home and be happy now.

“But it’s going to be very tough in Delhi – James looks like he’s in great form,” concluded Palmer.

Hopes of home success in the ROWE British Grand Prix Squash Championship rest exclusively with James Willstropafter the fifth-seeded Yorkshireman beat his Pontefract club-mate and Indian number one Saurav Ghosal in straight games to claim a semi-final berth in the $92,500 PSA Super Series event – the biggest squash tournament in Europe this year which is being staged at the National Squash Centre in Manchester.

It was a dazzling display of master v student as the experienced 27-year-old from Leeds, ranked six in the world, despatched the now 24-year-old from Calcutta who honed his game while earning a first class honours Economics degree at Leeds University.

“You can’t help but think about the friendship when you play someone like that, but I think I was a bit more ruthless than him today,” said Willstrop after his 11-7, 11-5, 11-4 victory.

“There’s a lot of respect between both of us,” added the former world No2. “He’s extremely quick – in fact, probably the quickest on the Tour. You have to be very accurate against him.”

Willstrop, winner of the first Super Series event of the year in New York, is celebrating his fourth semi-final appearance in 2010: “To be in the semis of a Super Series event is a pretty good effort. It feels great – but that’s not it; there’s a lot more to do. I’ve now got to get ready for the next one.”

When asked if he was particularly focussed on regaining his England No1 status, Willstrop said: “To be England No1 is a big thing, without doubt – but I don’t think about rankings.

“But I aspire to achieve what players like Nick (Matthew) and Ramy (Ashour) do. They’re at the top of their game. That’s my next step – and I’m playing well.”

Ghosal, who was making his Super Series quarter-final debut, was full of praise for Willstrop: “He’s playing really well – his accuracy is incredible,” said the world No26 from Chennai. “Most of the points I won, I really had to work hard to get.

“I was with him for two games – and then he really went away. He came out in the third game firing – playing ridiculous shots. I must have said ‘great shot’ to him about four times!”

On the effect of the friendship when they play each other, Ghosal explained: “I think it’s harder for me than it is for him.

“It was a privilege to play him – I really hope he goes on to win the tournament.”

Willstrop will now face life-long French rival Gregory Gaultier, the former world number one who denied the crowd an all-English semi by beating Daryl Selby, the world No9 from Essex, 11-3, 11-8, 11-5.

“I have had seven weeks of great preparation and think I am playing well – in fact I think I am better than I was at my peak,” explained the 27-year-old from Aix-en-Provence, who slumped five places in the rankings just four months after reaching No1 last November.

“I played really badly earlier in the year – I was really wasting my capacity. But now I am happy with my life, and I think it shows on court. I really want to get back to world number one.”

Selby was disappointed with his reversal of form over 24 hours: “I played really well yesterday to reach the quarters, but I just didn’t replicate that today,” admitted the England international.

“That was half down to Greg playing well and half to me feeling a bit sluggish. He started the match playing perfect squash – and once he has that confidence, he’s hard to break down.

“His movement is excellent and he’s a phenomenal athlete – I’ve got tremendous respect for his squash,” added Selby, who will now turn his focus on next month’s Commonwealth Games in Delhi.

The other semi-final will feature Egypt’s world No1 Ramy Ashour and Australia’s former world No1 David Palmer.

Palmer faced Amr Shabana, the reigning world champion from Egypt. The capacity and knowledgeable crowd at Sportcity were anticipating a high quality clash between two giants of the game – but were treated to a brief encounter which lasted just 10 minutes when Shabana offered his hand to the Australian just two points into the second game.

“It’s a nagging back problem which I’ve been aware of throughout the tournament,” said the 31-year-old from Cairo as he grimaced with pain while undergoing physiotherapy treatment within minutes of leaving the court.

“I felt that if I pushed it hard, I might inflame it. I didn’t want to risk doing any serious damage,” Shabana explained.

The final quarter-final was also short – a 24-minute display in which second seed Ashour despatched a less-than-fully-agile Frenchman Thierry Lincou 11-3, 11-4, 11-3.

“I feel my age is catching up on me – some weeks I feel older than others, and this hasn’t been a good week for me,” said the 34-year-old from Marseille.

“I have a problem with my left leg and this is restricting my movement. When my movement is not efficient, I suffer. And Ramy was playing at such a ridiculous pace, I couldn’t do anything,” explained the forlorn Frenchman.

By contrast, the exuberant young Egyptian was positively bubbling with enthusiasm for his performance. “I was very confident in my play today, but I knew he was not playing his normal game,” said 22-year-old Ashour, who has only spent 70 minutes over his three matches on the Manchester all-glass court.

“But tomorrow will be the biggest test – and if I am in the final, that will be even bigger!”