A swift straight games victory over Dutchman Laurens Jan Anjema in tonight’s 2nd pool round of the ATCO PSA World Series Squash Finals in London has guaranteed Egypt’s Amr Shabana a place in the semi-finals of the flagship PSA World Tour event at The Queen’s Club for the sixth year in a row. 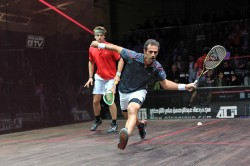 The $110,000 championship features the eight players who earned the most points from the nine PSA World Serieschampionships in 2011. Left-hander Shabana, the four-time world champion from Cairo, despatched the Dutch champion 11-5, 11-4 in just 24 minutes.

After making his debut in the championship in 2004, Shabana reached the last four for the first time two years later – and in 2008 finished as runner-up. The 32-year-old – the veteran of the Queen’s field -made the final for the second time last year.

His second win in a row at Queen’s ensures his place in Saturday’s semi-finals – but first he will face Group 2 rival Gregory Gaultier tomorrow to decide the Group winner. 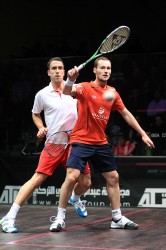 “It wasn’t an easy game but was a crucial win for me,” said the world No3 from Aix-en-Provence later. “This will give me a boost and confidence going forward.”

Gaultier, whose remaining pool match with Shabana will be a repeat of the 2008 final, boasts a remarkable World Series Finals record, having reached the climax in all three previous appearances, with title successes in 2008 and 2009.

But it was in Group 1 that James Willstrop kept home hopes alive with an impressive win over 20-year-old World Series Finals debutant Mohamed El Shorbagy.

The experienced Yorkshireman, who became England’s second successive world number one at the beginning of this month, contained the exuberant and often brilliant play of the young Egyptian in 31 minutes, winning 11-7, 11-6.

“It’s great to keep this good streak going and continue where I left off,” said Willstrop after ensuring his place in the semi-finals.

The 28-year-old from Leeds was marking his 17th successive Tour match win in a run which included successive World Series event title triumphs in Hong Kong, Kuwait and India.

Does the fact that he is now number one in the world give him extra confidence, or added pressure, asked MC Natalie Pinkham, the Sky Sports Formula 1 presenter?

“There’s no added pressure being world No1 – just excitement, enjoyment and motivation towards the next game,” replied Willstrop.

El Shorbagy and fellow countryman Karim Darwish will compete for the other semi-final slot from Group 1 in Friday’s final pool round.

In tonight’s opening match, Darwish earned his first win of the event when he beat Malaysian Mohd Azlan Iskandar 11-4, 8-11, 11-5.

Grinham out of contention as David and Duncalf maintain their focus.

Rachael Grinham was forced to retire from the competition early this morning, due to injury.  The Australian took a fall in the final points of her match against Low Wee Wern yesterday and spent the night trying to recuperate ahead of her fixture with Laura Massaro this afternoon.  Grinham took the decision not to risk pushing her injury however, and Group B will now be comprised of just three players. 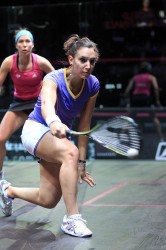 First onto court was Madeline Perry against Camille Serme.  The cool conditions on court seemed to better suit Serme in the opening exchanges and she confidently attacked with dropshots and picked off Perry’s loose shots from the tee.  At 3-9 down, Perry began to show signs of improvement, finding a tighter length and moving her opponent around but the French international was too far ahead and Serme closed out the game 11-6.

Perry settled in well after the break and shot ahead to a 6-0 lead utilising a faster pace and much improved width.  With her improved range, she closed out the second game 11-5 with Serme unable to mount any consistent challenge.  Serme handed her opponent a further lead early in the first game, with a number of errors, but  kept her nerve to stay close to her Irish opponent and took the lead at 7-6 with a renewed attacking style and saw out the match 11/7. 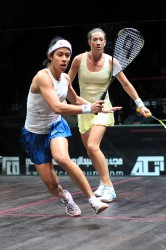 Nicol David continued her progression through the group stages with a controlled and precise 2-0 win over Australian Donna Urquhart.  The Malaysian played a tight and patient game from the start and was quite happy to wait for her chances to attack, and for errors from her opponent.  Urquhart was limited to only the occasional scoring chance throughout the match, and under pressure hit a number of balls out of court. David is through to the next round now after consecutive 2-0 wins, with Madeline Perry still to play tomorrow.

Due to Grinham’s withdrawal, Jenny Duncalf versus Low Wee Wern played the final WSA match of the day.  The first game was a close affair, with Duncalf always slightly ahead of her Malaysian opponent.  After establishing a small lead early on, she did enough to stay ahead of Wee Wern throughout the game and closed out a 11/7 win.   The Englishwoman took an early lead in the second, winning five points in a row and putting herself in a good position to see out the game.  Wee Wern’s strong retrieval kept the match from being a whitewash, and she came close to a comeback in the second game after some good recovery squash forced some errors from the England No1.  Duncalf weathered the storm though and came through her second win of the group stage with an 11/7, 11/8 win.