England’s top seed James Willstrop and fifth-seeded Egyptian Ramy Ashour will contest the final of the El Gouna International Open after surviving disrupted semi-final matches in the third PSA World Series squash event of the year on an all-glass court in the open air at Abu Tig Marina in the Red Sea resort of El Gouna. 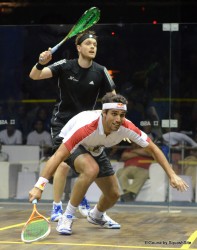 High winds resulted in sand being blown into the court, causing slippery conditions for the players. It was after the first game in the opening semi-final between Willstrop and Egypt’s defending champion Karim Darwish – a game interrupted several times by the players slipping and the court cleaners being called into action – that, following a single point of play, the players reluctantly decided that it would be dangerous to continue. 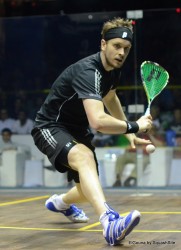 The match was later resumed on the traditional court at the nearby Movenpick hotel, where a handful of spectators saw Willstrop extend his first game lead to close out the match 11-7, 11-5, 11-2 to take his place in the final.

“Mentally, it was very difficult,” admitted the world number one from Leeds. “We get ready for a 7.30 start, extreme engaging of mind, then play one game, then down completely for an hour. This one game was to my advantage. No atmosphere, nobody watching, late, 10pm, the isolation of sport, that’s what it’s all about.

“He seemed to lose focus at the end, and I guess I made him lose it. But, one hour off when you are one game up – it had to be to my advantage.

“When you hear about tennis, and the weather breaks – the difference it can make in a match – this is what we had today. And we are not used to it.” 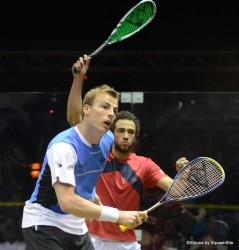 Meanwhile after further extensive court cleaning and testing of the floor by Ashour and Nick Matthew, the third seed from England, the second semi-final started on the glass court – where the 24-year-old Egyptian reached his second El Gouna final, winning a fast-paced, often frantic, always enthralling, four-game thriller to set up another Egypt v England clash in the final.

Ashour was unstoppable in the first as he blitzed through the first game, but Matthew managed to put a brake on proceedings in the second as Ashour’s error count rose, but still the Englishman needed four game balls as Ashour made a valiant comeback from 6-10 down.

The third was crucial: The Englishman led 7-3, containing the play well, but Ashour turned errors into winners as he took six points in a row before finishing it with another drop-shot into the nick.

The fourth was a nip and tuck thriller, close all the way to nine-all when a despairing dive from Matthew brought up match ball and a stoppage as Matthew had treatment to a cut on his hand. 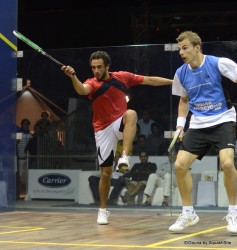 There was to be no reprieve though as Ashour took the next point to reach the final to the delight of the Egyptian crowd who had waited around hoping to see their hero in action – and were not disappointed.

“It’s always a tough match with Nick, and tonight the start was so fast, but then it was all mixed up with all the disruption and stoppages,” said Ashour after his 11-4, 9-11, 11-8, 11-9 win in 75 minutes. “I really had to work hard to try to stay in my bubble and not get distracted.

“During the third I had to get out of my box and seek an alternative, and I’m happy with the way I responded. 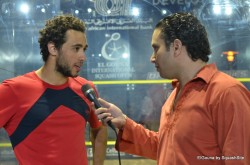 “Tomorrow will be a tough match against James, the conditions will probably play a part as it’s quite cold on there too, as well as everything else. You have to be very direct on this court. I slept a lot today to make sure I was ready for it!”

Willstrop is celebrating the 32nd Tour final of his career – and his seventh ranking final in a row since November – while world No5 Ashour is marking the 37th of his career and his second of the year.