England’s top seed James Willstrop powered past Germany’s Simon Rosner to book his place in the second round of the Allam British Open, the fourth PSA World Series squash event of the year at the O2 Arena in London.

The world number one from Leeds produced a mixture of precision squash with outstanding court coverage to triumph 11-3, 11-5, 11-7 in 49 minutes.

Rosner is an attacking player but struggled to get the ball past the 6ft 4in Willstrop, who produced a succession of sublime winners at the front of the court.

Willstrop said: “It’s fairly cool in the arena and it makes the glass court rather dead, so the ball stays short and doesn’t bounce as much as usual.

“I was pleased with my movement and with those conditions I knew that I would have a lot of ground to cover, so I was well prepared for it.”

Willstrop’s father, Malcolm, was back in his corner after a well-publicised disagreement aired in his book, Shot And A Ghost.

The 28-year-old Yorkshireman added: “I seem to have spent the last few months telling the world all my secrets, which is fairly unusual for a shy person like myself – but it feels good to have the old team back together again.” 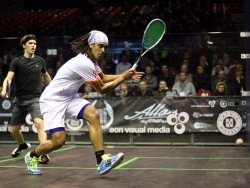 In the second round Willstrop meets his old sparring partner Alister Walker, who is now based in New York and recently switched his national allegiance to Botswana.

Walker removed English qualifier Chris Simpson and Willstrop added: “We used to see a lot of each other in Yorkshire and have played each other a million times.”

Earlier, England’s Daryl Selby won the opening game of his first round match against fourth seed Ramy Ashour, but walked into a juggernaut of inspired squash from the former world champion from Egypt and capitulated 3/1 in a 55-minute thriller. 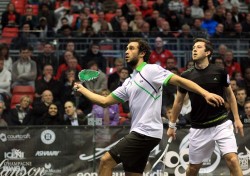 Selby took his game to the Egyptian, attacking short balls and really putting Ashour under extreme pressure, taking the opening game 11-8 in 10 minutes. But Ashour knuckled down to turn the game around and went in to the fourth game with a 2/1 advantage.

In the fourth, Selby found himself with two game balls to draw level at 10-8 before Ashour got three match balls all saved by the 29-year-old Englishman. The suspense among the big crowd at the O2 was tangible, with the home crowd pushing for their man, but all to no avail as the Egyptian took the match 8-11, 11-7, 11-5, 16-14.

Ashour commented: “The first time I came and saw the venue, I thought whoaaaa, it’s just huge. It is different and I’m so happy to be back. I haven’t played in the tournament for a while, and it’s nice to be back. England sets up the model for the rest of the world, and all the players are so happy to come and playing in the prestigious British Open.

“As long as I keep doing what I’m told, that I’m careful with what I eat, and manage my regime to take care of my body – which is probably a bit more fragile than others, my doctors told me – things will be fine. I can’t be ok, it’s 0% or 100%”

Whilst happy with his performance, Selby was disappointed that the draw had paired him up with Ashour in the first round. “Though it’s the first time we’ve ever played each other, it’s the third time that the PSA have drawn us together in the opening round – the first was at last year’s PSA Masters in Delhi, where a redraw then split us up, and the second was at the Tournament of Champions in New York where Ramy pulled out with his injury,” explained Selby, the world No10.

“The court was dead today and I just couldn’t get into a rhythm with him – he’s so difficult to play.

“He played some unbelievable shots – one minute it’s in the nick, the next it’s in the tin. It’s fantastic to see him moving so well – his court coverage is amazing. He’s great for the game.

“It’s disappointing, as I think I’m playing my best squash and would like to have done well here at a home venue,” concluded Selby. 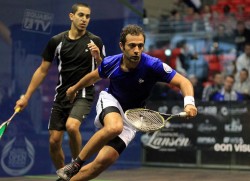 It was a good opening session for Egyptian squash as four-time world champion Amr Shabana, who has won everything the sport has to offer with the exception of the British Open, commenced his challenge for this year’s title with a hard fought victory against his young compatriot Tarek Momen.

In the fantastic setting of the London Piazza, O2 Arena, Shabana started hard and fast, winning the first game. But Momen, 15 ranking places lower and eight years his junior, battled back to open up a 2/1 lead.

But the 32-year-old maestro – who won his first title on English soil in London at the beginning of this year – drew level for the loss of just three points.

“I think this was an amazing match to win,” said the fifth seed from Cairo afterwards. “But when I saw the draw the first time, I was not very happy really.

“Squash is now very healthy, there is now a very small gap between the top 50 players, and it’s good to see people here that know their squash, they are making the tournament!” 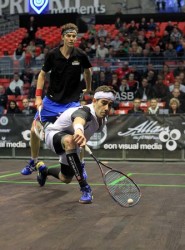 “We’ve played each so many times before – since we were juniors – it’s always tough with Cameron,” said the victorious 29-year-old from Santiago de Compostela.

Golan is bidding to emulate the world No10 ranking he achieved in 2009, before undergoing career-threatening knee surgery. “Physically I am fine – and mentally I am more experienced – so I’m really motivated to get back into the world top ten.

“My main aim is to stay injury-free – but it would be nice to get back into the top ten.”

Pakay got the ‘plum’ draw, as she goes forward to meet top seed and world number one Nicol David in the last match of the first round tomorrow night.