Englishmen James Willstrop and Nick Matthew, the top two players in the world, will line up for another clash in their long-running rivalry – their 30th PSA meeting alone – when they meet in the final of the Springfield Solutions British Grand Prix, the PSA World Tour International 70 squash event in Manchester.

The Yorkshire rivals prevailed in two contrasting semi-finals in front of a packed crowd at the National Squash Centre – world number one Willstrop surviving the third-longest match of his career, coming through 15-13 in the fifth in a dramatic 118-minute encounter with Frenchman Gregory Gaultier, the world No3, and Matthew taking out England team-matePeter Barker in straight games to reach a major milestone in his career, his 50th PSA World Tour final. 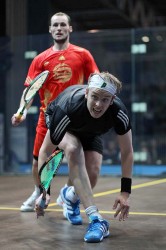 In the opening semi, third seed Gaultier took a 1/0 lead before allowing too many errors into his game to lose the next two to favourite Willstrop.

But the 29-year-old from Aix-en-Provence struck back to take a 5-1 lead in the fourth, and had several chances to finish it off from 10-8 up. After saving two match-balls, Gaultier finally walked off the court having levelled the match – pumping his fist with delight after a video review confirmed the stroke against his opponent.

The fifth was a thriller, with both players struggling physically at times, and Willstrop’s stunning retrieving and Gaultier’s occasional errors keeping it close all the way.

As the two players embraced, the crowd showed their appreciation with a standing ovation. 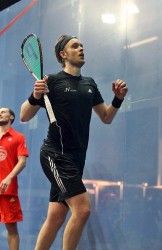 “When it’s played like that, squash is the hardest sport on earth,” admitted Willstrop, 29, from Leeds. “There was some twisting and turning tonight, there was no easy point on that court, you needed to plot and plan each and every one.

“This was a pretty special thing that Greg and I could play such quality squash for such prolonged period.”

Gaultier, who recently became a father, was gracious in defeat: “I really enjoyed playing today. I couldn’t have my normal training preparation with the birth of my baby, but I thought I did not too badly, a bit up and down, but I managed to get through most of the match.

“Shame that tin was just too high for me tonight!” 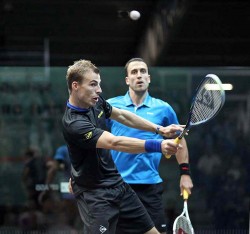 Second seed Matthew later joined Willstrop in the event’s dream final when he beat London left-hander Barker, the fourth seed, 11-6, 11-7, 11-3 in 48 minutes – less than half the length of the earlier semi!

“James and Greg were a hard act to follow,” admitted Matthew, the world champion from Sheffield. “Once I had the first game under my belt, I was able to relax and grew more comfortable.

“You are trying to concentrate on your own game, but you can’t help thinking that if you win 3/0, you’ll be fresher for tomorrow!”

In addition to countless clashes in domestic squash, Willstrop and Matthew began their Tour confrontations in the British Open qualifiers in June 2001. The pair’s head-to-head count since then is 21-8 in Matthew’s favour, with the Sheffield man boasting a 14-match unbeaten run since December 2007.

But, away from the Tour, Willstrop has turned the tables with two wins in continental European meetings over the past few months – and will be eager to reverse the Tour trend in Manchester. 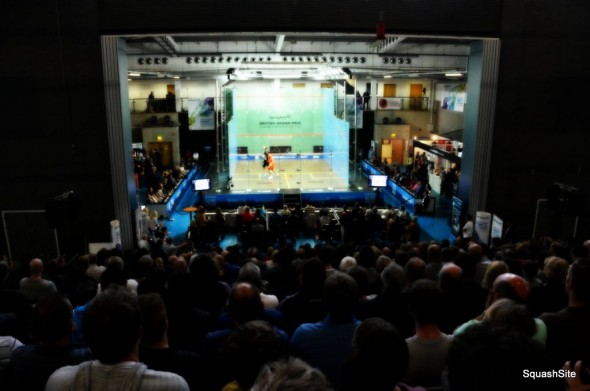