British Junior champion Charles Sharpes was given a squash lesson by world No4 James Willstrop in the first round of the ISS Canary Wharf Classic in London.

Willstrop, a three-time winner of the tournament, took just 26 minutes to complete an 11-5, 11-9, 11-5 victory in the PSA World Tour International 50 event at East Wintergarden in Canary Wharf – but the talented teenage qualifier impressed his opponent with a battling performance.

“I have known for some time that Charles is going to be a very good player,” said 27-year-old Willstrop. He has everything going for him in terms of shot-making ability and he didn’t look out of place on the glass court tonight. 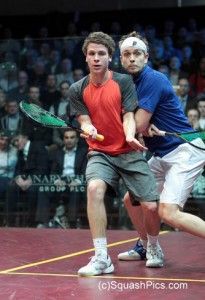 “Obviously I have been playing on the pro circuit for a number of years and in a big rally I have the experience to do things that Charles is still learning. But this is a very successful era for English squash, with four players in the world top ten and plenty more following on behind.

“Some people are critical of our junior progress in England and asking where the next top players are coming from, but I certainly do not subscribe to that view,” added the Yorkshireman. “Charles is like a lot of English juniors who seem to mature slightly later than players from the Eastern countries.”

Sharpes was joined in the first round by another rising England player, Robbie Temple, who gave a good account of himself against fellow countryman Peter Barker, the No4 seed.

The match was a historic encounter as it was the first to feature the new TV referee system which is on trial at Canary Wharf this week.

Barker won in straight games, but the match took 74 minutes to complete following a delay caused by a number of the court lights going out after overheating.

There were six video reviews and they all went against Barker, who was philosophical when he said: “I have been an advocate of the system for a very long time.

“This is long overdue. Other sports are using the technology and making it part of the show and I am very pleased that this has come in. It needs to be speeded up a bit but it is definitely a step in the right direction for the sport.” And he joked: “It’s just a shame that Robbie’s Mum and Dad were doing the video reffing.”

Finnish qualifier Henrik Mustonen lasted just 22 minutes before falling to Australian tour veteran Stewart Boswell. ButMatthew Karwalski, who has been training in Manchester with fellow Aussie Boswell for the past few weeks, kept Joey Barrington on court for 68 minutes before the Englishman triumphed 11-4 in the fifth game.

With Boswell in his corner, offering advice between games, Karwalski played some adventurous, attacking squash. 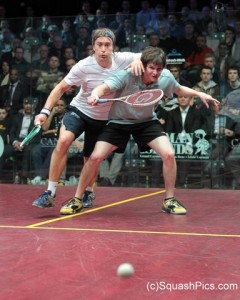 Barrington won the first game but Karwalski used the TV review system to good effect when he was game ball down at 10-9 in the second.

He was given a let but upon appeal the decision was overturned to give him a stroke to make it 10-10. He then struck a lucky nick in the back left corner to lead 11-10 and Barrington chopped a ball into the tin to make the match level at one game all.

Karwalski led 7-5 in the third after some tight drop shots but Barrington tightened up to win the game 11-8. However, the 25-year-old Australian powered through the fourth 11-6 to take the match the full distance.

Barrington opened up an early lead and maintained the momentum as Karwalski faded to book a quarter-final clash with Willstrop.