England’s James Willstrop survived an 85-minute marathon in the quarter-finals of the $172,500 HH Sheikh Saad Abdullah Al-Sabah Trophy, The Patriarch Amir, Kuwait Open to upset Egypt’s fourth seed Karim Darwish and claim an unexpected place in the last four of the eighth PSA Super Series squash event of the year at Green Island in Kuwait.

In fact, the tall Englishman has had the upper hand over former world number one Darwish since November 2006 – but the Egyptian, ranked four in the world, arrived in Kuwait full of confidence after winning last week’s Super Series event in El Gouna on home soil.

Fourth seed Darwish took the opening game, but saw his sixth-seeded opponent move ahead by taking the next two games before the Egyptian came out firing in the fourth to level the match. 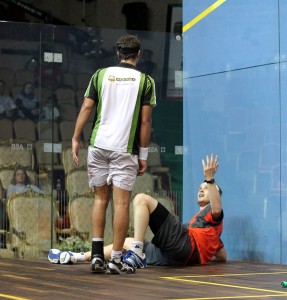 “It was not easy, and why should it be?” suggested Willstrop to www.squashsite.co.uk afterwards. “The man has such a trade record. It was a real battle out there, a real battle, and I’m happy to be at the better end of that.

“Yes, I did expect to win, like I do expect to win any matches really. I feel good, and I had a good week here, much better than last week – that was a bit of a disappointment. I didn’t feel I was at my sharpest, but then again, that may be coming from the heat.

“Do I still want to get to number one? Yes, I’m doing everything I can to achieve it, and if I get there, fantastic, but at least, I’ll know that I would have done my best,” added the 27-year-old from Leeds.

Willstrop now faces his third Egyptian in the event – and will be hoping to reverse his recent three results this year against world number one Ramy Ashour.

Top seed Ashour was in blistering form as he despatched experienced seventh seed Thierry Lincou 11-4, 11-7, 11-4 in 33 minutes – the shortest match of the day.

The Frenchman, a former world number one and world champion, was in no doubt about the result: “Ramy deserves his number one status. He is hungry for every match, every tournament. His pace was just incredible tonight,” said Lincou.

Ashour is one win away from reaching the Kuwait final for the fourth year in a row – and so is Amr Shabana, the compatriot who beat him in the 2008 and 2009 climaxes. 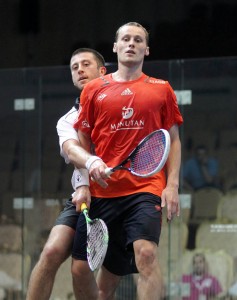 Gaultier, the fifth seed from Aix-en-Provence, ended the run of giant-killer Daryl Selby – beating the ninth seed, who ousted fellow Englishman and world No2 Nick Matthew the day before, 11-6, 11-2, 11-1.

“I felt that I had a great advantage on him, as I played already twice on that court, and that at some point on the match, he wouldn’t see the ball as clearly as he would have wished,” explained Shabana after his win. “Peter is a fighter, he won’t give you anything, and I’m happy to get through 3/0.”

Gaultier also recognised the significance of the effort Selby had made earlier in achieving his first ever victory over Matthew – winner of three Super Series events this year.

“We had a very hard first game, I was up 7/1, and he gave it a big push,” explained the world No6. “All credit to him, as I knew he would probably struggle today after his big win yesterday.

“Sometimes, players get through phases where they lose motivation, it was the case with Daryl last week in El Gouna, and it’s nice to see him playing well again yesterday.”