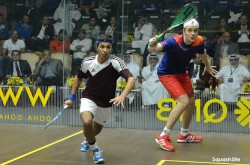 England’s James Willstrop put paid to local interest in the second round of the Qatar Classic for the first time ever when he beat teenage wild card Abdulla Mohd Al Tamimi in the first round of the seventh PSA World Series squash event of the year at the Khalifa International Tennis & Squash Complex in the Qatari capital Doha.

The 18-year-old from Doha was making his maiden appearance in the main draw of one of the biggest tournaments on the world circuit only months after making history by becoming the first Qatari to reach the semi-finals of the World Junior Championship. 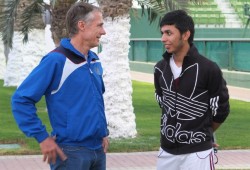 Coached by Australian legend Geoff Hunt, Al Tamimi is already the senior Qatar national champion and has picked up a number of notable junior titles including the Dutch Junior Open and Pioneer Junior Open in Germany.

“It’s fantastic to see Qatar producing such a good quality player,” said world No 3 Willstrop after his 11-7, 11-9, 11-3 victory. “He has won a couple of prestigious junior events, which may not mean much to some people in the audience but they’re important squash competitions – and if he can win such events, it means he is a great prospect for Qatar and for Squash.”

“I’ve not done anything amazing this season,” added the 30-year-old Yorkshireman. “I’ve had decent form in quarters and semis of recent competition but you have to put those disappointments behind you and focus on the next competition – which is Qatar, and this is a massive competition!” 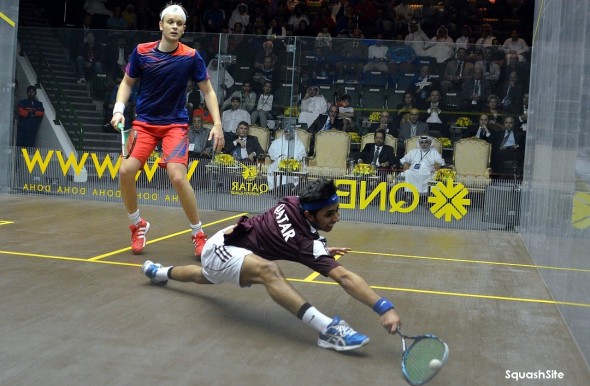 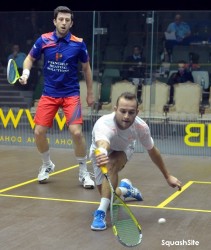 Willstrop will now face England team-mate Daryl Selby for a place in the quarter-finals. Selby, the world No 11, beat French qualifier Gregoire Marche 11-6, 11-6, 11-3 in 40 minutes.

“Happy to get through 3-0 against Greg,” tweeted the 31-year-old Essex man later. “Talented young player but I managed to stick to a good game plan. Lovely day off tomorrow.”

Eighth seed Momen reserved his place in the last 16 round in unusual circumstances – when his opponent Kristian Frost Olesen, a qualifier from Denmark, conceded the match at match-ball in the third game having lost the first two for just five points! 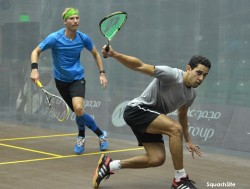 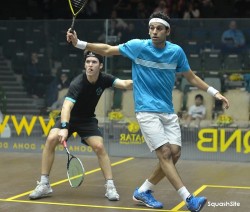 Darwish, who is making his 13th appearance in the event since 2001, will now face Egyptian team-mate Mosaad, the world No 9 who defeated veteran Malaysian Ong Beng Hee 11-6, 11-9, 11-5 in the last match of day.

Elshorbagy, the 22-year-old world No 6  who reached the World Championship semi-finals in Manchester for the second year in a row, will now face Dutchman Laurens Jan Anjema in the second round.

Anjema, the world No 18 from The Hague, beat Olli Tuominen 11-3, 14-12, 11-8 in 51 minutes to celebrate his career-first victory over the experienced Finn, a 34-year-old qualifier who, like Darwish, was marking his latest appearance in the event after making his debut in 2001.