Just over a week after contesting the final of the Hong Kong Open, England’s James Willstrop and Egyptian Karim Darwish will play out their second successive PSA World Series climax at the inaugural Kuwait PSA Cup at Green Island in Kuwait City.
In a replay of the Hong Kong semi-final, third seed Willstrop faced French rival Gregory Gaultier, the No5 seed, for a place in the final of the eighth PSA World Series squash event of the year. 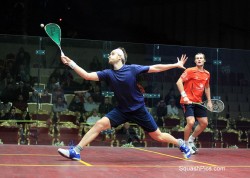 After surviving two tough games, the Englishman was in absolute control of the eight-minute third before closing out the match 11-9, 11-6, 11-3 in 58 minutes.

The victory marked Willstrop’s ninth successive Tour match win without dropping a game – since losing to Gaultier in the World Open semi-finals in Rotterdam.

“I was very confident on court today, I’m hitting the ball well,” explained Willstrop to www.squashsite.com afterwards. “It’s all about keeping that streak going, and that’s not always that easy. Today, I think I managed to frustrate Greg and prevent him from playing his game. I played some accurate squash, and it was a very pleasing performance.”
While Willstrop went into the first semi-final poised at seven-all in his Tour head-to-head record with Gaultier, second seed Darwish had never even conceded a game to his opponent Mohamed El Shorbagy in three previous meetings with his ten-year-younger fellow countryman. 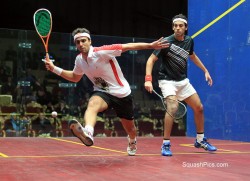 This record looked safe for at least the first game and a half. But 20-year-old El Shorbagy slowly started to get into the match, pulling back to take the lead at 5-4 and 8-7. But at nine-all, two rash errors cost the seventh seed the chance of levelling as Darwish extended his lead.

Darwish maintained his lead in the next game – but underdog El Shorbagy snatched seven quick points in a row before taking the third to reduce the deficit.

It was nip and tuck in the fourth with both players sharing the lead before El Shorbagy reached game ball at 10-9, only for Darwish to battle on to match-balls at 11-10 and 12-11.

“He didn’t want to give up,” exclaimed former world No1 Darwish. “Those youngsters – you can’t get rid of them,” added the relieved 30-year-old from Cairo.

“I’m so happy to get into the final again. James is a in a great form, but I’m happy with my performance in this tournament too. It will be a good match.”

While Willstrop is marking his 27th Tour final appearance, it’s the 37th for the Egyptian.