Ramy Ashour and James Willstrop – two of the top three squash players in the world and both former world number ones – set up a much-hoped-for J.P. Morgan Tournament of Champions semi-final after contrasting quarter-final victories in the first PSA World Series event of the year at Grand Central Terminal in New York.

Top-seeded Englishman Willstrop ended the spirited run of Stephen Coppinger, the unseeded South African who had his best PSA World Series showing with his quarter-final appearance. Tied at nine-all, the first game could have gone either way. Cool as a cucumber and betraying no sign of unease, Willstrop demonstrated the control and confidence that kept him at the top of the world rankings for most of 2012 and gave himself the early cushion by winning the game 12-10. 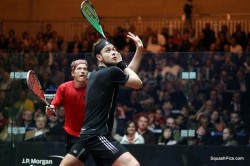 “Scrappy” was Willstrop’s description of the first game. “It was important to win that first game,” explained the world No3. “Stephen played hard and it becomes a whole different match when you are one game down at the start.”

Coppinger had the cheering section of South African fans rooting him on, complete with the South African flag draped over the stands. Their enthusiasm was increasingly muted as Willstrop asserted his superior racket skills and court coverage to win the second game 11-2.

The third was more of the same, as Willstrop moved the world No23 from Cape Town from corner to corner and kept his 6′ 3″ opponent off balance for the remainder of the match before closing it out 12-10, 11-2, 11-4 in 43 minutes. 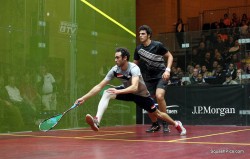 Wednesday night’s tantalizing semi-final was confirmed when Ramy Ashour held off fellow countryman Omar Mosaad in an emotional and erratic match punctuated by some magical moments. The 6’4″ Mosaad jumped off to a dramatically fast start, taking the crowd and his opponent by surprise as he won the first game 11-4.

After staying on court during the game break to practise on his own, the reigning world champion and current world No1 improved his shot length and combined it with a quick attack in the second game to take a commanding 10-1 lead before winning it 11-3. 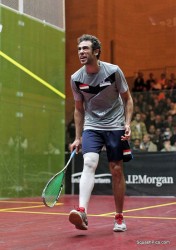 In the third, the two Egyptians went toe-to-toe, exchanging the lead several times as they both used a full variety of shots to move each other the full length and width of the court. It was Ashour who snatched the game at 12-10 by wrong footing his tall opponent with a cross-court forehand that was beyond Mosaad’s reach.

Ashour seemed assured of the victory when he took a commanding 10-4 lead in the fourth. The world No9, however, was not ready to concede and with a combination of several winning shots off his racket and a few errors from Ashour, recovered to 9-10.

Ashour was not be denied, though, and after forcing Mosaad to the back of the court with great length hit a soft drop that was just out of Mosaad’s reach.

Ashour’s immediate reaction was quite emotional: he threw his racquet down and gave a fist pump and a shout. “I was just mad at myself for giving up that big lead at 10-1,” said the voluble Ashour after the match.

Earlier in the week, the 25-year-old from Cairo had talked about the pressure of topping the world rankings. “Being world number one is hard work,” he said. “I’m happy because I got there, but it is not always fun. I am trying not to put too much pressure on myself.” 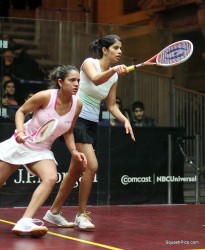 The women’s draw at the J.P.Morgan Tournament of Champions got underway today with one upset as qualifier Joshana Chinappa defeated #2 seed Dipika Pallikal 11-7,11-7,3-11,11-8. Chinappa made the adjustment to the ToC glass court more effectively than her countrywoman. “It was my first time playing on the glass court,” said Chinappa after the match. “The court is pretty dead in the back, so I knew I really wanted to concentrate on hitting width and depth to the corners.” Chinappa won the first two games by identical 11-7 scores by doing just that. Pallikal, ranked 15 places higher in the world rankings than Chinappa, came alive in the third game when she started hitting better length and utilized the volley attack to win the game 11-3. Unfazed, Chinappa re- established her original strategy of hitting wide and deep and won the match by winning the fourth game 11-8.
It was a fast paced, attacking game from start to finish for American Amanda Sobhy, who defeated Delia Arnold of Malaysia. 11-9, 11-5, 11-8. The Harvard University sophomore, on a school break, was relishing the competition on the glass court in Grand Central.  “I haven’t been able to play many tournaments, so this really fun,” Sobhy said, referring to her college class and match schedule which prevents her from competing on a more regular basis on the WSA Tour. 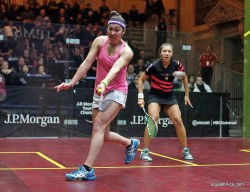 Sobhy will next play #3 seed Kasey Brown, who moved onto the quarterfinals with a tough five game victory over qualifier Heba El Torky.   “El Torky is a great shot maker and I wasn’t hitting good enough length in the beginning,” said the Australian about dropping the first two games, 9-11, 8-11. Hitting better length in the third and fourth games paid off as Brown notched 11-6 wins in each. El Torky led most of the way in the fifth, but Brown stepped up at 7-9 to reel off four unanswered points to move into the ToC quarterfinals.
Natalie Grinham, the defending champion, also needed five games to keep her hopes of retaining the title alive. The 35-year-old mother defeated 19- year-old Nour El Tayeb, -11, 11-9, 11-8, 7-11, 11-4. Grinham’s quarterfinal opponent will be Sarah Kippax of England who defeated Canada’s Samantha Cornett, 11-9, 11-5, 11-8.
Natalie’s sister Rachael also made it to the quarterfinals with a 3-0 victory over New Zealand’s Amanda Landers-Murphy.