Top seed James Willstrop won a grueling physical 79-minute battle late on Wednesday night in the second round of the Allam British Open in London’s O2 Arean against former England team-mate Alister Walker, who now represents his home nation of Botswana. The first game included 31 refereeing decisions and Walker received a conduct warning for pushing after a succession of collisions and mid-court blocks. 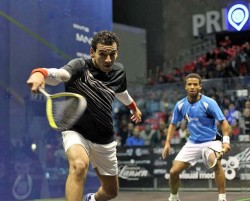 Willstrop, the 28-year-old world number one from Leeds, won 9-11, 11-7, 11-7, 11-5 and now meets Mohamed El Shorbagy after the 21-year-old Egyptian No.7 seed saw off Londoner Adrian Grant in straight games and immediately caught a train back to Bristol for a university exam on his tournament rest day today.

Egyptian squash superstar Ramy Ashour survived a massive scare as he fought back from two games down to beat Spanish No.1 Borja Golan in the Allam British Open at the O2 on Wednesday. 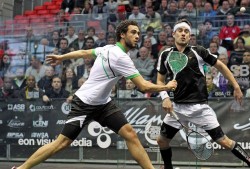 Ashour, the 24-year-old No.4 seed from Cairo, admitted that his head was all over the place at the start of the match at London’s O2 Arena.  He recovered from a perilous position and suddenly transformed his game into an attacking whirlwind to reach the quarter-finals of this $150,000 PSA World Tour event.

He said: “Mentally and physically I was two paces behind Borja. Footwork, movement, racket preparation ­– everything, he was so much better than me. That’s the first time I have played him and he played incredibly well at the start. I can’t explain what goes on inside my head. I know it’s something I should work on to find a solution. Sometimes I am just too nice. You walk on court, shake hands and smile at your opponent and it’s difficult to find the right motivation. You lose concentration and you just can’t seem to find your way out.

“It helped when Egyptian coach Amir Wagih came to my corner. Maybe I should ask him to help me out more often. My brother Hisham often talks to me between games but sometimes we argue and fight because I find it so difficult to absorb information. My head is so crowded. But today, when Amir was talking, I was listening.” 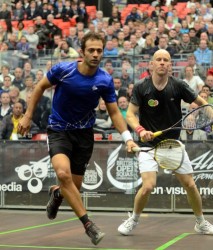 He will need to be mentally alert throughout his quarter-final against fellow Egyptian Amr Shabana on Friday.

In the Women’s event, Egypt’s teenage sensation Nour El Sherbini sprang a major surprise by beating No.4 seed Madeline Perry in the second round. The 16-year-old from Alexandria fought back from 2-1 down to beat one of the most experienced players in the women’s professional game 11-6, 4-11, 5-11, 11-3, 11-5 in 45 minutes. 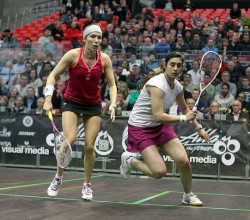 El Sherbini, who won her first world junior under-19 title at the age of 13, combines life on the WSA Tour with six hours of school work each day. She certainly did her homework on her Irish opponent as she reached the quarter-finals of this $95,000 event.

She said: “I am studying five days a week as a Grade 10 student alongside my squash activities.” El Sherbini gained revenge for a semi-final defeat in the recent Irish Open and explained: “At 2-1 down I had to be focused. I got my confidence back and played a lot of drops. That seemed to be working well but first of all I had to get Madeline to the back of the court.  “I love the atmosphere here at the O2 Arena and it is so exciting to be playing here. It helps you to play your best squash. I am so happy to win.” 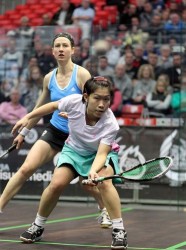 In the quarter-finals El Sherbini meets Annie Au, the No.7 seed from Hong Kong, who recovered from two games down to beat England’s wild card Alison Waters, the former world No.3 from London who is returning to action after a long injury break.

Waters began strongly, driving the ball firmly, but when Au got used to the cool court conditions she began to cut the ball in short, taking Waters out of her comfort zone and into the deepest areas of the court. Au finally edged past a tiring Waters 9-11, 7-11, 11-9, 11-9, 11-7 in 59 minutes. 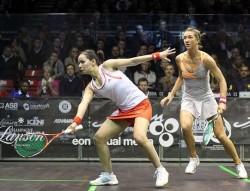 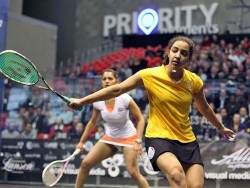