Alister Walker claimed his second PSA World Tour trophy in two weeks when he beat Scot Alan Clyne in the final of the Cannon Kirk Homes Irish Ope at the Fitzwilliam Lawn Tennis Club in Dublin.

The top seed from Botswana arrived in Dublin fresh from winning the Berkshire Open in the USA – and reached the final after despatching England’s No4 seed Jonathan Kemp in a four-game semi-final. 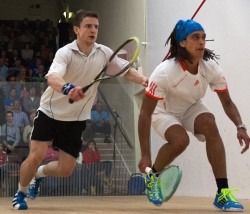 His surprise opponent Clyne pulled off a notable upset in the other semi where he survived a 110-minute marathon against second seed Borja Golan, saving a match-ball in the decider to beat the higher-ranked Spaniard and former Irish Open champion.

“The Scot went on to take the third game 11-9, however, but Walker came back strong in the fourth and took a 7-1 lead,” added King. 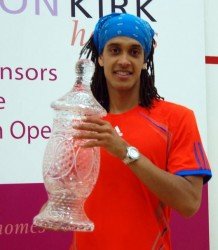 “I’m so happy to win my second event this week,” said a delighted Walker after the 11th Tour title triumph of his career.

“Alan backed up incredibly well from his gruelling match with Borja last night. I knew it was going to be tough because he has a deserved reputation as an extremely fit and robust athlete and he proved that coming back from 9-6 down to win the third game.”

Walker becomes the latest winner of the popular Dublin championship which includes illustrious former champions includingPeter Nicol, John White, Thierry Lincou and Alex Gough. “There are some great former winners of this title and it’s an honour to have my name next to all the previous title winners here in Dublin,” added the New York-based 29-year-old.

England’s Alison Waters wons the Cannon Kirk Homes Irish Squash Open for the second time, proving her injury, which kept her out of the game and tour for a year, is well behind her. 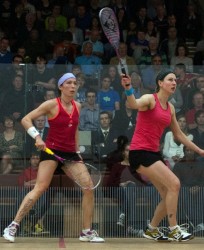 Waters won the women’s title against Ireland’s top seed  Madeline Perry, coming through all the way from the qualifiers.

Madeline came out in the 3rd set with renewed energy, and stormed to a 6/1 lead, then led 7/2. She appeared to have found her rhythm at last breaking Waters’ stride. However Waters came back to 8-8. Madeline saved Waters’ first match point at 10/9, as Madeline’s shot shaved the side wall line, millimeters from being out.

Alison grabbed her next match point to take the match 12/10 in the end. Alison’s current ranking of 32 in the world will undoubtedly climb when the May rankings are released.

“Delighted to have won here again in Dublin, to have beaten both Laura and Madeline along the way makes it feel really good,” said the new champion. 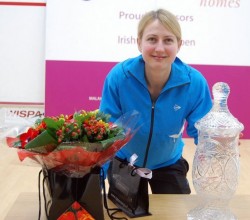 “I feel as though I am getting back to somewhere near my best as I was before my injury and now I just want to get back to the top of the rankings again.”

“I really struggled with my movement and balance because of these terrible blisters on my feet,” admitted Perry, “but Alison has played really well all week, having to play through qualifying, and she deserved her victory.”