In the biggest upset on the opening day of qualifying action in the WSF Women’s World Junior Team Squash Championship in Boston, USA, underdogs Wales crushed three-time former champions Australia 3/0 in the World Squash Federation event at the Murr Center at Harvard University.

“We don’t beat Australia at many sports,” said a jubilant Wales coach Andrew Evans after his team’s stunning win over the seventh seeds who have reached the finals in seven of their 13 appearances since the inaugural event in 1985. 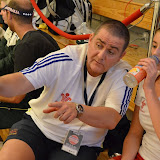 “When I saw the draw I knew it could be a good one for us, but I still expected it to be a really close match and go down to the wire,” Evans explained to the official website www.worldsquash.org/worldjuniors2011

“Fiona played very well,” added Evans. “Then Tesni finished it off against Tamika. She didn’t start too well but played very well and Tamika, who we know has injury problems, got tired in the second, otherwise that could have been close too.

“Hannah found some form after what was, in her own words, a disappointing individual competition and finished it off really well.

“It’s a fantastic win, I’m really proud of them, and everyone back in Wales will be too.”

Hosts USA, seeded to reach the final in what would be their best ever finish after competing in all the championships since 1985, also made a positive start in Pool B, beating event debutants Guyana 3/0. 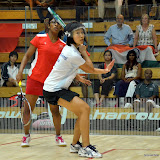 After morning wins for India (over France) and Hong Kong China (against championship newcomers Ecuador), the scene was set for what was essentially the decisive match in Pool C.

It was the day’s most dramatic encounter in which third seeds India battled back from losing the opening match to beat sixth seeds Hong Kong 2/1.

“I want chocolate,” demanded Indian number one Anaka Alankamony of coach Cyrus Poncha as she came off court after beating Ho Ka Po to level the tie. “I worked so hard,” said the 17-year-old Asian junior champion from Chennai. 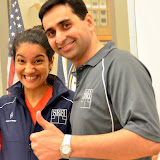 “Cyrus just told me to go on and play my game, not to consider any pressure and to be confident in myself,” said 16-year-old Karki after the decider. “In the first two games we were going point for point, but I managed to make some good plays at the end of the games to take them.

“The third was the hardest game of all, but I was determined to close it out, I know how good she is and I really didn’t want to play another two games!”

Full Results and more on the Official website: www.worldsquash.org/worldjuniors2011