English squash star Alison Waters has been honoured by the launch of a newly-named Virgin Train – the first in a programme rolling out across the UK.

After a journey from London, ‘Alison Waters‘ arrived in Manchester with her name sake on board – and was welcomed just two hours later by Virgin Trains and Alstom staff. England international Alison Waters is the 2010 British National Squash Champion and ranked number five in the world.

The Virgin Trains sponsorship initiative ‘Supporting British Athletes’, which is supported by Alstom who built and maintain Virgin’s Pendolino train fleet, enables a number of sportsmen and women to attend training camps, key competitions and championships up and down the country.

With the numerous events happening in the run up to the 2012 Olympic Games and Glasgow 2014 Commonwealth Games, the ability to train and take part in competitive events is an important part of these athletes’ careers. Waters, who hails from London but whose training heartland is the Manchester National Squash Centre, is the first of the 2014 Games’ hopefuls to reap the benefits of this sponsorship – and this year plans to compete in numerous international events, including next week’s Cedrus Investments Cayman Islands Open, the 2011 World Open in the Netherlands and the 2012Women’s World Team Championship in France. 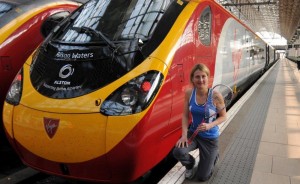 Alison travels regularly between her home in Southgate and Manchester, and said: “I am so excited to be launching a train named after me! This normally happens to Royalty! On a more serious note the Virgin Trains sponsorship allows me to travel freely to my training ground – a real help in these tough times and something that I hope will give my career chances a real boost.”

Virgin Trains spokesperson Natasha Grice said: “We think it’s fantastic that Alison has agreed to have one of our trains named after her. We really hope that it will spread the message of her career quest across our network but also that it will raise awareness of the great lengths our top athletes have to go through in order to realise their sporting dreams.”

Tim Garner, Tour Director of the Women’s International Squash Players’ Association, added: “It’s fantastic to see a premium company like Virgin supporting Alison. She is one of WISPA’s elite athletes and deserves this type of recognition. I am sure that this will be a beneficial relationship for both parties and will be the start of many more partnerships between our players as ambassadors for international brands.”

Roy Sullivan, Alstom Transport UK’s Mainline Operations Director, said: “Alstom is delighted to support this initiative with Virgin Trains. We identify with the determination and commitment needed by the athletes to deliver top performance and wish Alison well for the exciting challenges ahead.”

For further information or to book Virgin Trains log on to www.virgintrains.com, telephone 0871 977 4222 or visit any Virgin Trains’ station.