Whilst the top four seeds will line up in the quarter-finals of the Soho Square Women’s World Open in the Egyptian Red Sea resort of Soho Square at Sharm El Sheikh, their opponents will not be those expected by the draw of the richest ever WISPA World Tour squash event.

The 21-year-old from Paris twice led, and was pegged back twice – but in a decider characterised by long, tense rallies, it was underdog Serme who was more assertive, and found enough opportunities to utilise her volleys and delicate drops to progress.

“I wanted this so much and I think that made me focussed on playing the right shot at the right time. Some of the time I try to do too much at the front of the court. I try to play there like the Egyptians – and you can’t do that all of the time!” 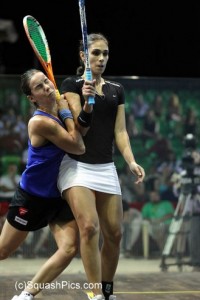 Serme will now face another English opponent Jenny Duncalf, the No2 seed who – after a receiving a bye in the first round – began her 2010 world campaign by beating Egypt’s Engy Kheirallah 11-9, 11-9, 11-2.

Ireland’s Madeline Perry, the fifth seed who celebrated the best win of her career at last month’s Australian Open, was brought down to earth in the second round by Australia’s tenth seed Kasey Brown. 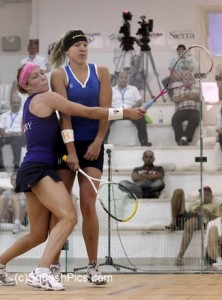 “Madeline’s been playing well and she had a lot of confidence from winning the Australian and the Irish, but I just kind of thought to myself, ‘I’m not going to lose this’ – and didn’t think about the result at all and just tried to play the best squash I could each point.

“It’s my best World Open performance so far, for me this is the most prestigious event so to make the quarters is a big deal,” added the New York-based 25-year-old.

The 20-year-old from Penang claimed her unexpected place in the second round after upsetting four-time runner-up Natalie Grinham on the opening day,

“It was pretty close,” said Low Wee Wern afterwards. “In the first she was in great form and I just had to hang in with her, she was high on confidence after a good win yesterday.

“It’s great to be in the quarters for the first time.” 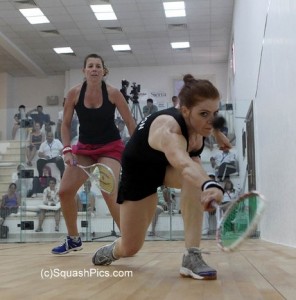 Two of the sport’s longest-serving professionals fought out their 17th Tour clash since 1999 when sixth seed Natalie Grainger and 14th seed Vanessa Atkinson took to the court. Former world number one Granger, from the USA, took the opening two games – but Dutch star Atkinson, also once No1 in the world, romped to an 8-3 lead in the third before Grainger reached her first match ball at 11-10.

“She was playing so well, and I didn’t feel like I was doing anything wrong – it was just a question of sticking in there,” Atkinson said. “She’s such a good squash player that if she plays like she did in the first game and half the second game there are no weaknesses.

“I’ve played 15 World Opens and I think that is plenty,” added the 34-year-old. “I just wanted to come here and feel that I have done myself justice – and I think I have done that.”