Skip to content
More surprise results dominate the headlines from the Hi-Tec Australian Open in Canberra as 19-year-old Havard student Amanda Sobhy beat another seeded player to progress to the quarter-finals of the WSA World Tour Gold45 event.

The former World Junior Champion beat No.2 seed Jenny Duncalf in four games, a feat that she previously attained at the Cleveland Classic in February, when the world No.3 was forced to retire injured. 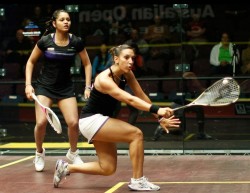 Sobhy will now face Dipika Pallikal, who also upset the seedings by defeating No.6 Camille Serme of France in four games.  The Indian international came from a game behind to get the better of Serme and record the biggest win of her career to date. 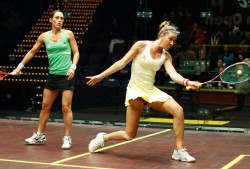 Two Australian hopefuls looking for a title win on home soil were drawn to face each other in round two, the experienced Rachael Grinham against Donna Urquhart.  It was the 25-year-old from Yamba, New South Wales who started the match quicker of the two, and Urquhart sprang away to a 2-game lead.  Grinham’s resolute and clever play saw her claw a game back in her favour but the younger player held her nerve and closed out the match, ending the former world No.1’s hopes of a second Australian Open title.

Urquhart progresses to face No.3 seed Laura Massaro who, despite being forced to an early first-game tiebreak, played a steady game to see off young teenager and fellow Englishwoman Emily Whitlock. 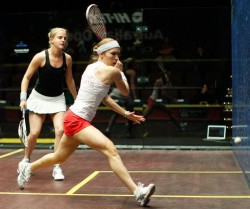 Also holding hopes of a home title win, Kasey Brown came from a game down to beat Joelle King of New Zealand.  The No.8 seed will now face the experienced Irishwoman,Madeline Perry who, after a tie-break second game, beat Emma Beddoes in three games to book her quarter-final place.

Alison Waters continued to make short work of her seeded opponents as she got the better of No.5 seed Annie Au, gaining some revenge for her defeat at the hand of the Hong Kong international at the Allam British Open second round back in May.

Waters will face the biggest test of her injury comeback to date, as she is faces World Open Champion and world No.1 Nicol David in the next round.  After dropping a game to Welsh youngster Tesni Evans in the first round, David was in a clinical mood as she dispatched fellow Malaysian Low Wee Wern in 32-minutes, dropping just 11 points in the whole match. 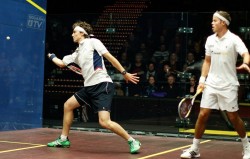 Big-hitting Aussie Cameron Pilley booked a place in the Hi-Tec Australian Open quarter-finals when he beat compatriotZac Alexander in a thrilling second round match today in Canberra.

The Australian number one was forced to call on all his experience to see off Alexander, who attacked at every chance he got in the second round of the PSA World Tour International 70 squash event to take the game right up to his older rival.

The two Australians thrilled the crowd with their brilliant attacking play, with the match at times turning into a virtual shoot-out as the pair blazed away hitting winners from all over the court. 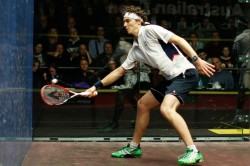 However, Pilley’s greater experience told in the fifth as he took advantage of some errors from Alexander – ranked 18 places below – to skip away with the match.

“I put on a few points at the end and ran away with it, but it wasn’t as easy as that,” Pilley said. “I started well and played really well with good length to the back of the court, but as soon as I dropped short after that, because he had nothing to lose he just went for it.

“In the fifth game I got back to doing what I did in the first, and it was only in the fifth game that he started making errors when I put a bit more pressure on him,” continued the Netherlands-based 29-year-old. “But it was a bit of a shoot-out.”

The two players were evenly matched throughout with Aziz managing to win the points at crucial times.

He said coming from a long way down to win the second game was a key moment in the match. “When I was down 9-5, I told myself that if I could stay in there and win the game then I was 75 per cent on the way to winning the match,” said the 28-year-old from Cairo. “So I pushed really hard at that point.” 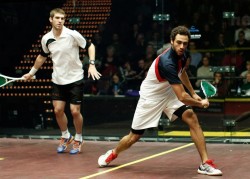 Egypt’s defending champion Ramy Ashour, also from Cairo, stayed on track for a possible semi-final with Pilley when he cruised past Englishman Olivier Pett 11-7, 11-5, 11-7.

Pett tried hard but couldn’t cope with the skills of the Egyptian maestro, who took just 26 minutes to reach the final eight.

Ashour said he was pleased with his form this early in the tournament. “Sometimes you are a bit shaky at the start of the week, but I am getting more confident as I go along.”