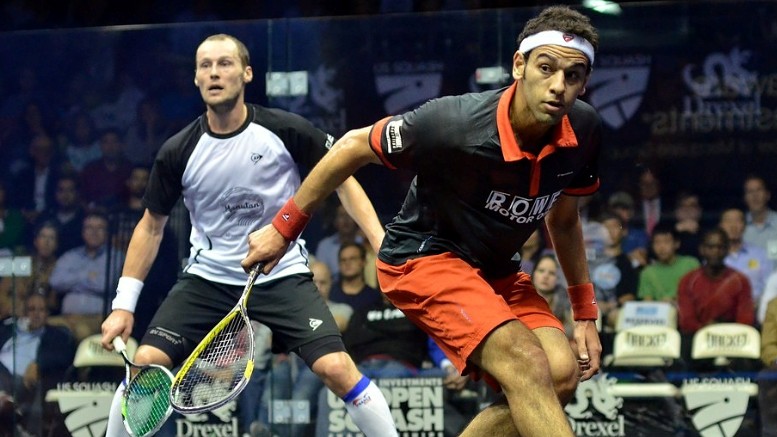 It was a good day for Egypt in Philadelphia as three Egyptians joined Nicol David in the U.S. Open finals … 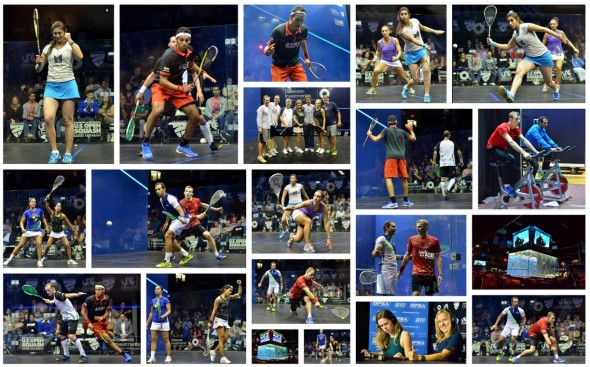 New World No.1 Mohamed Elshorbagy will take on four-time World Champion Amr Shabana in the final of the 2014 Delaware Investments US Open at Philadelphia’s Drexel University  on Saturday in a mouth-watering all-Egyptian encounter. 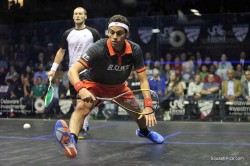 Elshorbagy climbed to the top of the world rankings courtesy of an emphatic 3-0 win over Frenchman Gregory Gaultier, who has occupied the top slot since April, in the semi-finals whilst Nick Matthew, who also had aspirations of regaining the No.1 ranking during the US Open, saw his hopes dashed at the hands of a resurgent Shabana in the second semi-final.

The Egyptian pairing, separated by 12-years, have never met in the final of the PSA World Series event and Elshorbagy, who is aiming to win his fourth consecutive PSA World Tour event and extend his 17-match winning streak, says he is relishing the prospect of taking on the ‘Maestro’. 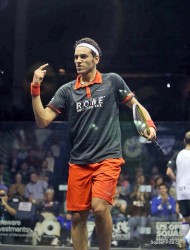 “It’s been a dream to get to that spot and I can’t believe I’m there right now,” he said. “But right now I have to control my emotions as I am playing against Amr Shabana in a World Series Final which is such an honour for me.

“He is a true legend of the sport but I’m going to be trying to keep my momentum going.

“I’ve got my first goal from this tournament, the No.1 ranking, but my second goal is to win the title and I’ll certainly be giving it one more push tomorrow to achieve that.” 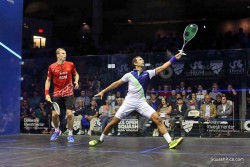 Shabana, who occupied the World No.1 slot for 33-consecutive months from 2006-2008, was quick to offer his congratulations to Elshorbagy but has his sights set on the title.

“Congratulations to Mohamed, it takes a lot of work to become World No.1 but I’m coming into tomorrow focused on beating the World No.1,” he said.

“We’re all here to compete and win and I’m taking it day by day and enjoying my squash at the moment.”

Top seed Nicol David and No7 seed Nour El Sherbini will contest the final of the Women’s Delaware Investments US Open in Philadelphia – Malaysian David bidding to become the first player in the 60-year history of the championship to win the title three times in a row, and Egyptian teenager El Sherbini looking to repeat her shock World Championship victory over the world number one in March. 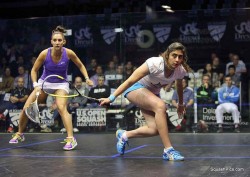 Having already upset England’s world No2 and reigning world champion Laura Massaro in the quarter-finals, El Sherbini came from a game down to beat France’s fourth seed Camille Serme. 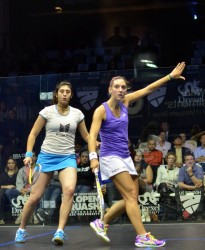 The Alexandria-based Egyptian made the better start in each of the four games, but after quickly falling 4-0 down in the first, Serme started to get into the match, levelled at five-all and ended the game going away for an 11-7 win.

El Sherbini shrugged that off to lead throughout the next two games, and although Serme managed to pull back to eight-all in the second and six-all in the third, the 25-year-old from Creteil could never quite get her nose in front, with youngster El Sherbini just having the slight edge in the ability to hit winning shots.

Serme battled back from 1-8 down to level the fourth, but a deep cross-court brought up match-ball for the Egyptian, and after a short exchange of volleys in the middle of the court, El Sherbini hammered the ball away to win 7-11, 11-9, 11-8, 11-8 for a place in the final. 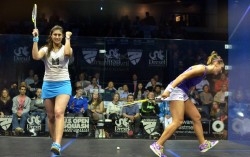 “I can’t feel anything right now,” said the delighted winner, now in her eighth WSA World Tour final. “I can’t believe I’m in the final of the US Open!

“In the first she was playing so well, killing everything, and I didn’t have a solution. I relaxed, started to play my own game and thankfully it worked, but I was so tired when she was coming back at the end, I was just hitting the ball and what happened would happen!” 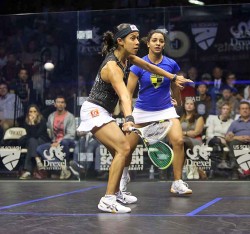 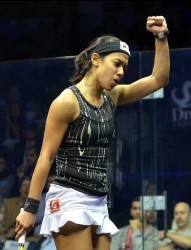 “It feels great,” David said of her win. “She started off not in the game, but I knew she would just keep coming back and hitting some amazing sho

ts. I just really had to dig deep and come back to my own game and really stick to it. I’m so pleased to win that one 3/1.”

David admitted the importance of fighting off three games balls in the second game.

“I think it makes a huge difference between when you’re one all or two love up so I used that to my advantage. She came out and played better squash in the third, so I had to come back in the fourth and really switched on and played much better and won it.”