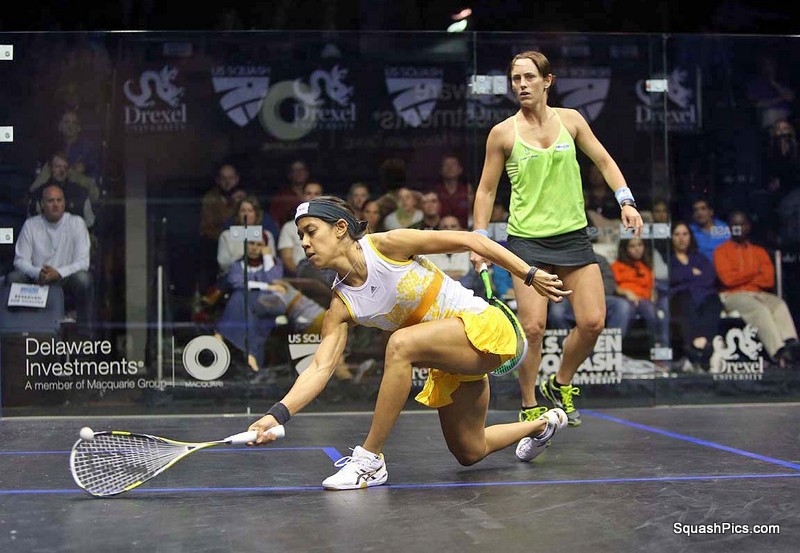 The Delaware Investments U.S. Open continues in Philadelphia with the top half of the PSA and WSA $115k World Series draws … 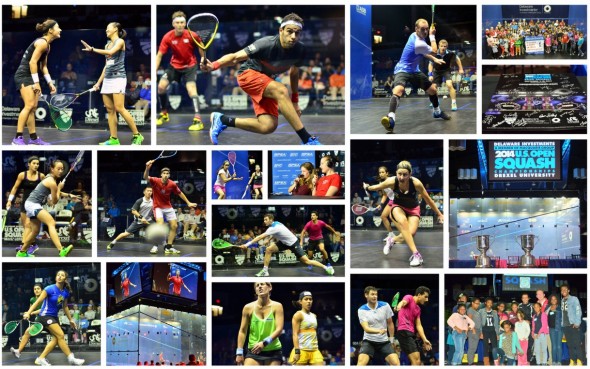 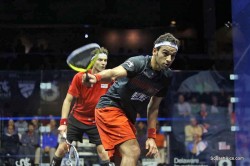 Egyptian World No.2 Mohamed Elshorbagy booked his place in the quarter-finals of the 2014 Delaware Investments US Open courtesy of a hard-earned 3-0 victory against Australian national champion Cameron Pilley at Philadelphia’s Drexel University earlier today.

Pilley, one of the most powerful hitters in world squash, came out of the blocks firing against the 23-year-old from Alexandria and produced some of his best squash in recent times, but Elshorbagy proved up to the challenge and weathered an early storm to eliminate the man from Yamba.

Despite them being separated by 20 places on the PSA World Rankings there was little between the players on court and Elshorbagy looked a relieved figure as he snuck the opening game 13-11 after a tense tie-break. 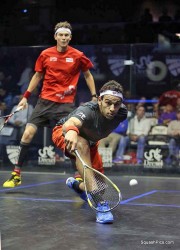 The second game was equally tight with both players displaying a dazzling array of shot-making ability, but again it was the Egyptian who edged it 11-9 before completing a 13-11, 11-9, 11-6 victory.

“I don’t know what it is about Cameron but he always seems to play his best against me and that was a really great battle today,” said Elshorbagy.

“He’s such a hard hitter and fast player. The first two games really were 50-50 and I tried to match him in the first game, but I changed my tactic in the second game and luckily I got the the better of the games to get off in three.

“I’m really happy to come through that match as it was a tough one and I think will help me in the next round.” 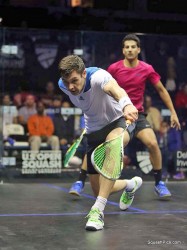 Elshorbagy will now take on England’s Adrian Waller in Wednesday’s quarter-finals where he’ll be hoping to set-up a potential encounter with World No.1 Gregory Gaultier, who got past a spirited Alan Clyne in his second round match, in a match-up which could have massive repercussions at the top of the PSA World Rankings.

Victory for Elshorbagy in a potential encounter with Gaultier, who faces German Simon Rösner in his quarter-final, would see him take a huge step towards claiming the World No.1 ranking for the first time in his career, adding extra motivation for the dynamic star.

“I’m into the quarter-finals now and there’s only three more matches to go to win this title and capture that dream of becoming World No.1,” said Elshorbagy.

“There is such a great battle going on between Greg (Gaultier), Nick (Matthew) and myself for that top ranking at the moment. Those are the kind of things that we all play the game for and I’m going to give it my all this week to try and make it happen.”

Waller earned his place in the last 16 courtesy of a battling performance against Egyptian Mazen Hesham which sees him into the quarter-finals of a PSA World Series event for the first time in his career while Rösner breezed past Leo Au in the other match in the second round, which continues with bottom half action on Tuesday. 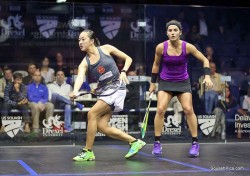 Just two weeks after combining to help Malaysia win team gold in the Asian Games, Nicol David and Low Wee Wern will be on opposite sides of the squash court as they face off for a place in the semi-finals of the 2014 Women’s Delaware Investments US Open, the WSA World Series Platinum event at Drexel University in Philadelphia.

Sixth seed Wee Wern, now boasting a career-high world No5 ranking, recorded her fourth successive Tour win over Nicolette Fernandes when she beat the 16th seed from Guyana 11-8, 11-7, 5-11, 11-3 in just over an hour to reach the event’s last eight for the second year in a row.

“I was really struggling at the start,” admitted Low. “I just couldn’t see the ball or find any length. I was struggling through all the games really. She was playing well and putting a lot of pressure on me.”

Top seed David is bidding to win a record third successive title. The world No1 played out her 35th Tour match with veteran Australian Rachael Grinham – and earned a 14th successive win over the 2006 champion (since losing the British Open final in 2007) when she beat 37-year-old Grinham 11-1, 11-8, 11-3. 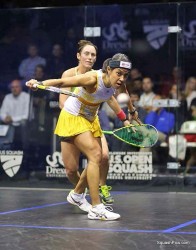 “I think it’s the Philly Cheesesteak!” David jested when asked about her luck in Philadelphia. “It’s been great. I love coming back to Philly. I have so many great memories after winning two US Opens here. I just love this court and the crowd as well. You can just feel the vibe to the whole event, which just makes you want to play good squash.

“Rachael and I have played so many times, she’s so experienced and tricky – you have to have plans A, B and C ready against her! I knew I had to be totally focused, and I was really pleased with my performance today.”

David’s clash with fellow Penangite Low will be their first meeting since contesting the Asian Games individual final in September. “It’s always tough going up against your teammate,” David continued. “It’s great for Malaysia for us both get to the quarter-finals. It’s nice to see Wee move up the rankings as well, so I’m looking forward to a good match, but it’s still the quarter-finals of the US Open so I’m going to put my focus in and get started strong.”

The other quarter-final decided from the first session of second round action will see a repeat of last week’s Carol Weymuller Open semi-final clash in New York between Egypt’s Raneem El Welily and England’s Alison Waters, the third and fifth seeds, respectively. 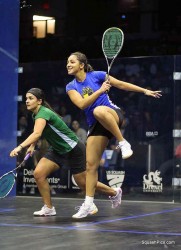 “I’m very happy with how I played,” said El Welily, the 2012 runner-up. “I was moving well – the physio team here are looking after me really well.” 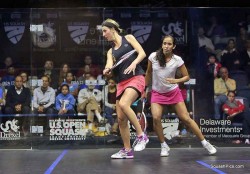 Waters faced unseeded Egyptian Nouran Gohar, the 17-year-old prodigy to whom she lost in straight games in their only previous meeting, in the China Open just a year ago.

“That was really tough,” admitted world No7 Waters. “For 17 years old her hitting is amazing and endless. I’m glad I managed to beat her now, in a couple of years it’s going to be very difficult!

“I was still feeling pretty good and quite confident despite losing those match balls in the fourth, but I was glad I was able to come back strongly in the fifth. I think she got a bit excited about the prospect of winning.”