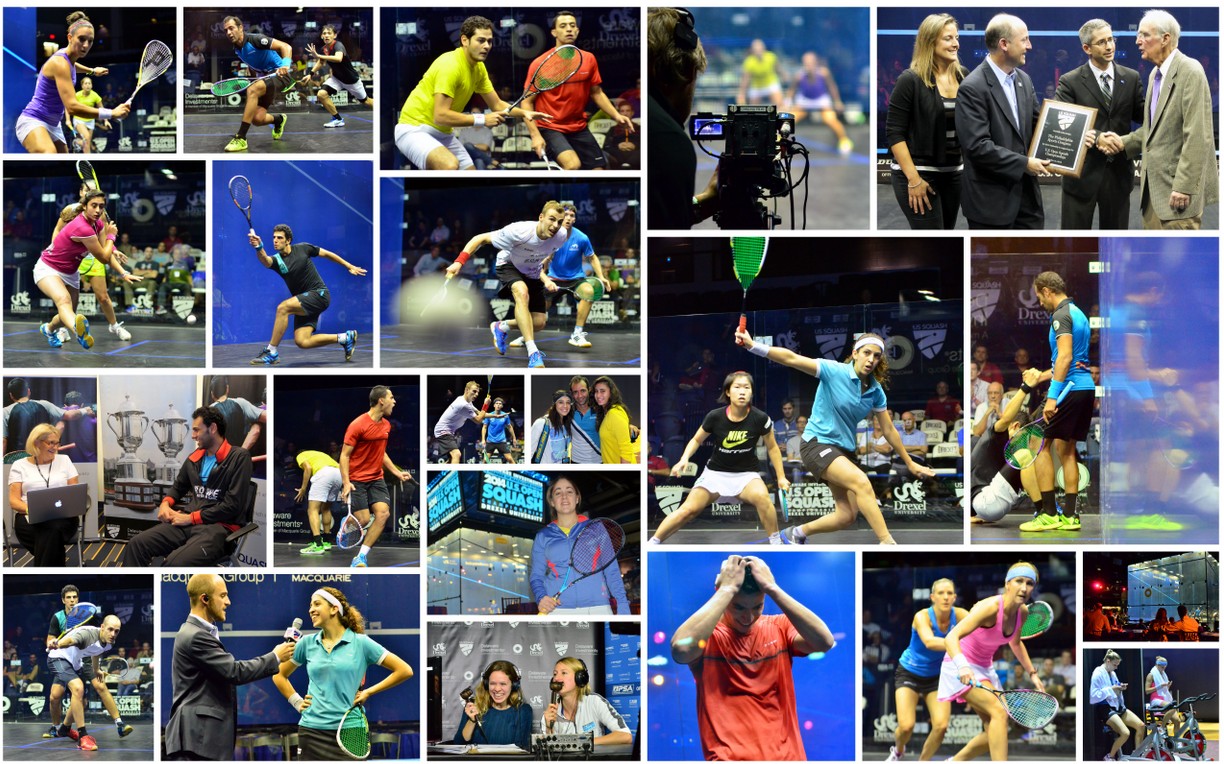 The sixth day’s play on the Delaware Investments U.S. Open in Philadelphia saw the culmination of round two and the quarter-final lineups completed. 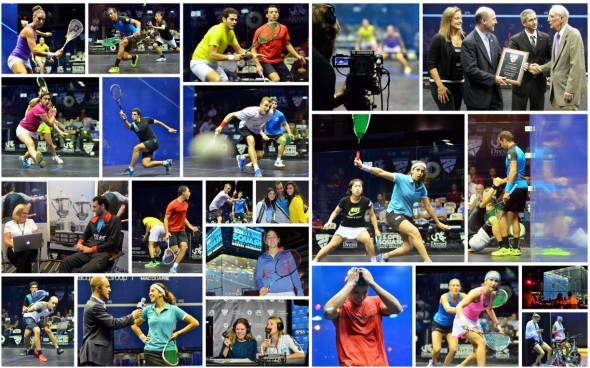 World Champion Nick Matthew booked his place in the quarter-finals of the 2014 Delaware Investments U.S. Open with a 3-0 win over Guernsey’s Chris Simpson during the second day of second round action at Philadelphia’s Drexel University. 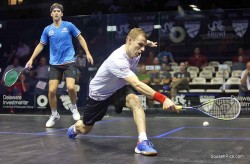 Matthew was forced to produce some of his best squash against the spirited Simpson, who came into the second round following a 3-0 demolition of South African Shaun Le Roux, before eventually emerging an 11-6, 11-6, 11-9 winner in the battle of Commonwealth Games flag bearers.

“I really enjoyed that battle,” said 34-year-old Matthew. “It seems to be a familiar tale for me to be hanging in against Chris at the end of the third game and you could see he was desperate to take that one. 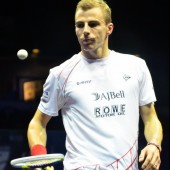 “I’ve not had a match at that pace for a while now and it did wonders for me and really opened up my lungs.

“I have a day off to now to enjoy and do some work with my coach on a few areas and prepare for the next match.”

Matthew will now face Egyptian Fares Dessouki in Thursday’s quarter-finals, after the 20-year-old saved five match balls against Karim Abdel Gawad to complete a remarkable comeback and secure his place in the last eight, while Egyptian duo Amr Shabana and Omar Mosaad triumphed to set up an all-Egyptian encounter. 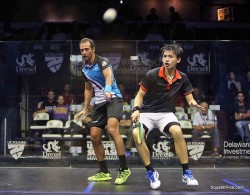 Four-time World Champion Shabana had to use all his guile and experience to survive the onslaught from Hong Kong’s No.1 player Max Lee and scrape his way into the quarter-finals after an epic 78-minute encounter.

“Max seemed very powerful on court tonight and all credit to him for the fight he put up as I needed every second of my experience to beat him today,” said Shabana.

“We played at the British Open and I think he definitely learnt few things from that match but I was pleased with how I dug in as it shows that I still have some fight left in me at my age.

“Omar is a player who is up and coming and already banging on the door of the top eight players. He’s incredibly strong and it will be a tough match.” 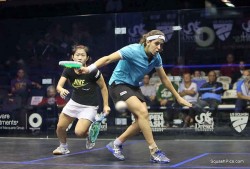 Egyptian teenager Yathreb Adel created the biggest second round upset in the Women’s Delaware Investments US Open when she despatched eighth seed Annie Au in straight games to celebrate her first appearance in the quarter-finals of a WSA World Series event.

The 18-year-old qualifier from Cairo – the lowest-ranked player in the draw – frustrated the Hong Kong international who never held a lead throughout any of the three games in the WSA World Series Platinum event at Drexel University in Philadelphia. 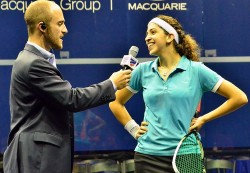 Adel, the only qualifier to make the last eight, admitted she was happy to turn around the result from her only previous encounter against Au in the Hong Kong Open in December.

“It was last year so I think I improved a lot maybe, and this year I had a different plan and it worked. Last year was the first time I played her so I was used to her shots. I was more concentrated today than I was then.” 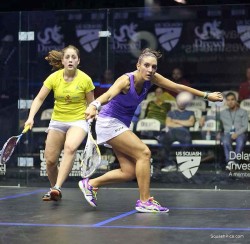 Adel now faces French international Camille Serme for the first time. The No4 seed from Creteil made it to the quarter-finals for the first time since 2011 after ending the run of unseeded Tesni Evans – the Welsh player who upset 13th seed Kasey Brown in the opening round.

“I didn’t feel on top of my game physically, so that was a tough day at the office,” said world No6 Serme after her 11-7, 11-8, 11-7 victory. “She made it very tough despite having a long match in the last round, so I’m very pleased to win that in three games.” 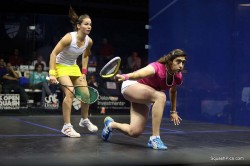 Nour El Sherbini ensured Egyptian interest in three out of the four quarter-finals when she beat England’s Jenny Duncalf 11-4, 11-7, 11-5 – not only avenging her defeat by the former world No2 from Harrogate in their last meeting in January 2013, but also moving ahead 3/2 in their career head-to-head tally. 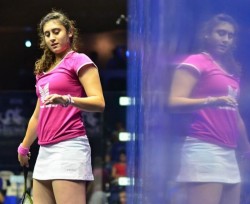 “I wasn’t 100% comfortable with my shots today,” said the No7 seed  playing in her first WSA World Tour event since the British Open in May. “It’s been a long time since I played a big match on a glass court and Jenny’s not the type of player you want to meet in this sort of match.

“It feels amazing to be back, and I’m really pleased and excited that I could be able to come and play here. I know I’ll be playing another Englishwoman next, and either Laura [Massaro] or Sarah [Kippax] will be tough, so good luck to them and I hope we have a good match on Thursday.” 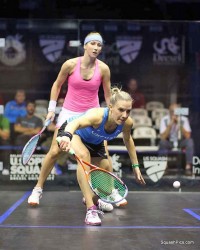 In the last women’s match of the day, it was second seed Laura Massaro who claimed the final quarter-final slot when she beat England team-mate Sarah Kippax 12-10, 11-7, 7-11, 11-3 to repeat the result of their previous meeting only a week ago in the Carol Weymuller Open in New York.

“It’s really tough whenever you’re playing a teammate and friend,” said world champion Massaro later. “We played first round in Brooklyn last week, and we practiced together in between, so we played each other a fair bit recently.

“It’s always hard because you know each other’s games and you’re trying to adapt what you’ve learned so it was good to come out with the win.” 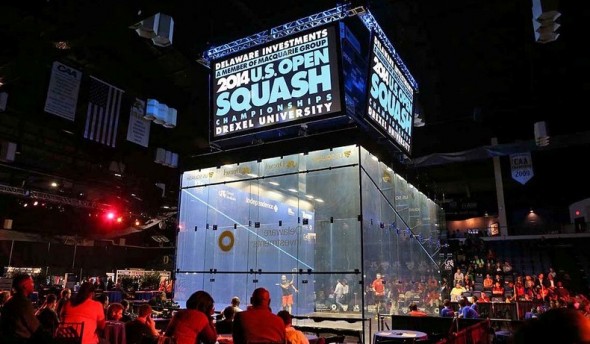