Gordon Tests Gaultier In US Opener 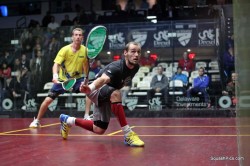 Top-seeded Frenchman Gregory Gaultier secured his place in the last 16 of the Delaware Investments U.S. Open Squash Championships – but the 2006 champion was fully tested by US wild card Christopher Gordon on the opening day of main draw action in the fifth PSA World Series event of the year which is celebrating its third successive year atDrexel University in Philadelphia.

Gordon, the US champion from New York, led 9-7 in the first game but world No2 Gaultier fought back to win the opener on a tie-break.

It was all Gaultier in the third as the 30-year-old from Aix-en-Provence clinched the 12-10, 15-13, 11-1 victory in 47 minutes which takes him one step closer to a second successive appearance in the final. 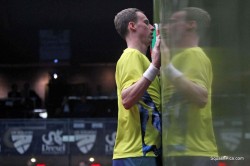 “I was really pleased with how I played,” said world No48 Gordon. “There was no pressure on me so I could just enjoy it. The third was disappointing, the ball was spongy. I knew it was spongy, and I had to get a better length, but he just got on top of me so fast.”

Gaultier, expected to reach his fourth Tour final appearance in a row next week, was happy to win: “I’ve been away for a month now, three tournaments in a row is tough – you just need to keep the motivation to play at the right level.

“Chris has improved a lot. He’s proved he’s number one in America and we’re good friends. I spent a lot of time with him in New York. Maybe I gave him too much advice – he nearly got me in the first two games!

“I won this tournament a few years ago. Winning the US Open means a lot to all of us and it’s getting bigger and better every year. I’ll give all I’ve got to try to win it again, but there are no easy matches nowadays – you have to treat every round as a final.”

Gaultier will face a surprise opponent in the second round after England’s world No35 Adrian Waller pulled off a notable upset over Egypt’s former world junior champion Marwan Elshorbagy, ranked nine places higher.

“Had to do a bit of grinding tonight to get the 3-2 win from 2-0 down,” tweeted the world No32 from Edinburgh later. “Pleased to be into the last 16 of the US Open anyhow!”

“He played so much better after the first game,” said 22-year-old Elshorbagy, bidding to reach the quarter-finals for the fourth year in a row. “I think I played the same through the whole match, but he came back so well and I was fortunate to get through.” 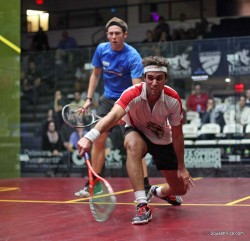 “It’s always tough playing someone like Ryan,” said former world number one Darwish. “I had to be on my toes the whole match. Those few points at the end of the second were crucial, then I relaxed a bit in the third but managed to get it back for the fourth.”

Seventh seed Borja Golan took his place in round two but only after his Canadian opponent Shawn Delierre was forced to retire after only two games.

After dropping the opening game, Canadian number one Delierre was leading 10-8 in the second when when he stretched for a ball and fell to the floor.

After taking a three-minute injury timeout, the 31-year-old from Montreal offered his hand to Golan. “It’s not the way anyone wants to win,” said the top-ranked Spaniard. “He played well at the start of the second game and it’s a real shame he couldn’t finish the match.”

Delierre was later seen walking away cautiously: “It’s good news that I can walk – nothing too serious,” he told the official website www.usopensquash.com 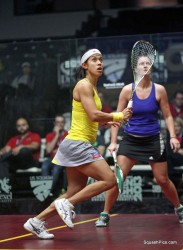 Malaysia’s Nicol David successfully began her defence of the Women’s Delaware Investments U.S. Open Championship title after dismissing New Zealand qualifier Kylie Lindsay in the first round of the Women’s Squash Association World Series Platinum event which – for the first time ever – is providing equal prize money to the men’s event.

David, the world number one from Penang bidding to become the first player for more than 20 years to retain the title, eased to an 11-5, 11-3, 11-7 victory in 24 minutes at Drexel University in Philadelphia in her maiden meeting with the world No43 from Matamata.

“It’s great to be back, knowing that I had a good run here last year and also last week in New York,” said the title-holder.

“The US Open has set the benchmark for World Series squash events in offering equal prize money and treating the women’s event as equal in very way,” added the 30-year-old. “Everyone just wants to thank them for the effort they’re putting into this.”

The championship, which is boasting five home players in the main draw for the first time in history, started disappointingly for two who fell at the first hurdle. 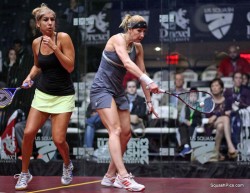 “It’s fantastic to get a match under your belt on the glass court so early in the tournament,” said world No21 Kippax. “You can’t give Latasha an inch, she’s so experienced, and she was starting to get into her stride at the end. I was a bit lucky, but pleased to finish it in three.”

After the disappointment of early exits from the Malaysian Open and Carol Weymuller Open, England’s No4 seed Alison Waters was back at her best to beat Ireland’s Aisling Blake 11-7, 11-6, 11-3.

“Aisling was playing well and finding her length from the start,” admitted the world No4 from London. “It took me a while to find my range. It’s always a bit of an unknown quantity in your opening match, but I’m glad to get through in three and looking forward to the rest of the tournament now.”

Eighth seed Madeline Perry was given a scare by Tesni Evans, a 20-year-old Welsh qualifier making her maiden appearance in the event. Experienced Irish number one Perry led 2/0, but plucky Evans fought back to draw level.