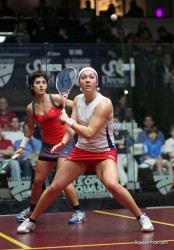 New Yorker Amanda Sobhy singlehandedly carried US hopes into the second round of the Women’s Delaware Investments U.S. Open Championship after a revenge victory over Guyana’s Nicolette Fernandes on the second day of first round action in the Women’s Squash Association World Series Platinum event which – for the first time ever – is providing equal prize money to the men’s event.

Despite being unseeded, Fernandes is now ranked higher than Sobhy, the 16th seed. And world No19 Fernandes demonstrated the significance of her higher placing by beating the US star in last week’s Carol Weymuller Open clash in New York.

But after losing out on a fiercely-competitive first game at Drexel, world No23 Sobhy proceeded to totally dominate the remainder of the match as she advanced to the last sixteen for the second time since 2010, much to the delight of the Drexel crowd. 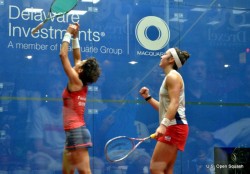 Sobhy took control from the outset of the second and proceeded to take the next two games for the loss of just five points – and build up an 8-2 lead in the fourth.

Fernandes fought back to 5-8, and from 5-10 down saved three match balls before finally succumbing as she tinned a dropshot to her own anguish – and Sobhy’s delight.

“It’s been a good summer, I’ve been able to train more than study and hopefully I can get my ranking back up to the top twenty. I’ll be back later on to support Sabrina in her match and hopefully we can keep this Sobhy Super Streak going!”

“I know Sabrina very well from the juniors,” said 20-year-old Tayeb. “I never played her but I’ve heard about her a lot. As you can see I was very focused today, because I know how dangerous Sabrina can be.” 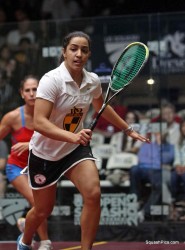 There was further Egyptian success when last year’s runner-up Raneem El Weleily took a step close to a second successive appearance in the final with an 11-7, 11-4, 11-5 win over experienced Mexican Samantha Teran.

“It wasn’t an easy first round to get,” said third seed El Weleily. “It’s very hot on there and she doesn’t stop running.

“It would mean everything to me to win this event. It’s one of the very biggest and I’ve got my family here supporting me this week so hopefully I can keep on winning for them.” 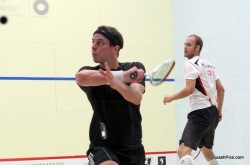 New Zealander Campbell Grayson became the only qualifier to break through into the last 16 of the Delaware Investments U.S. Open Squash Championships when he upset Swiss number one Nicolas Mueller on the second day of first round action in the fifth PSA World Series event of the year at Drexel University in Philadelphia.

In four previous encounters, the world No41 from Auckland had never beaten Mueller, though he had taken him to five games as recently as last March in the Kuwait PSA Cup.

Grayson took the opening two games, the first on a tie-break – but world No25 Mueller fought back in the third to reach game ball at 10-6.

But the 24-year-old from Zurich twice hit the tin and, still up 10-9, attempted a crosscourt backhand drop that just missed the nick – and Grayson jumped onto it to drive the ball to an unreachable length. Despite a further game ball for Mueller at 11-10, Grayson refused to surrender, racing away with his ticket into the second round by forcing Mueller to scramble too much and ultimately finding himself congratulating the exuberant Grayson. 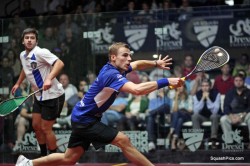 In his first appearance in the second round, Grayson will now face 2007 champion Nick Matthew, the third seed from England. In one of the most unlikely scorelines ever recorded, the world No4 from Sheffield beat Kuwait qualifier Abdullah Al Muzayen 11-0, 12-10, 14-12 in 52 minutes.

“In some ways that first game was the worst thing that could happen,” said Matthew. “He played really well after that, and it was very tough, but I’d rather have it that way than win all the games 11-0.” 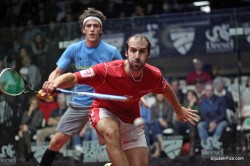 US interest in the main draw ended when top-ranked German Simon Rosner ousted eight-time US champion Julian Illingworth 11-6, 11-8, 11-4 in 42 minutes.

“I’m really happy with how I played,” said world No12 Rosner. “Julian’s always a difficult opponent and especially in front of his home crowd. He was coming back at me in the second, I had to dig deep to win that one.

But eighth seed Tarek Momen, ranked just a single place above the German, struggled to overcome Matthew Karwalski, having to fight back from a two-game deficit before seeing off the Australian qualifier 6-11, 5-11, 11-5, 11-4, 11-3 in 51 minutes.