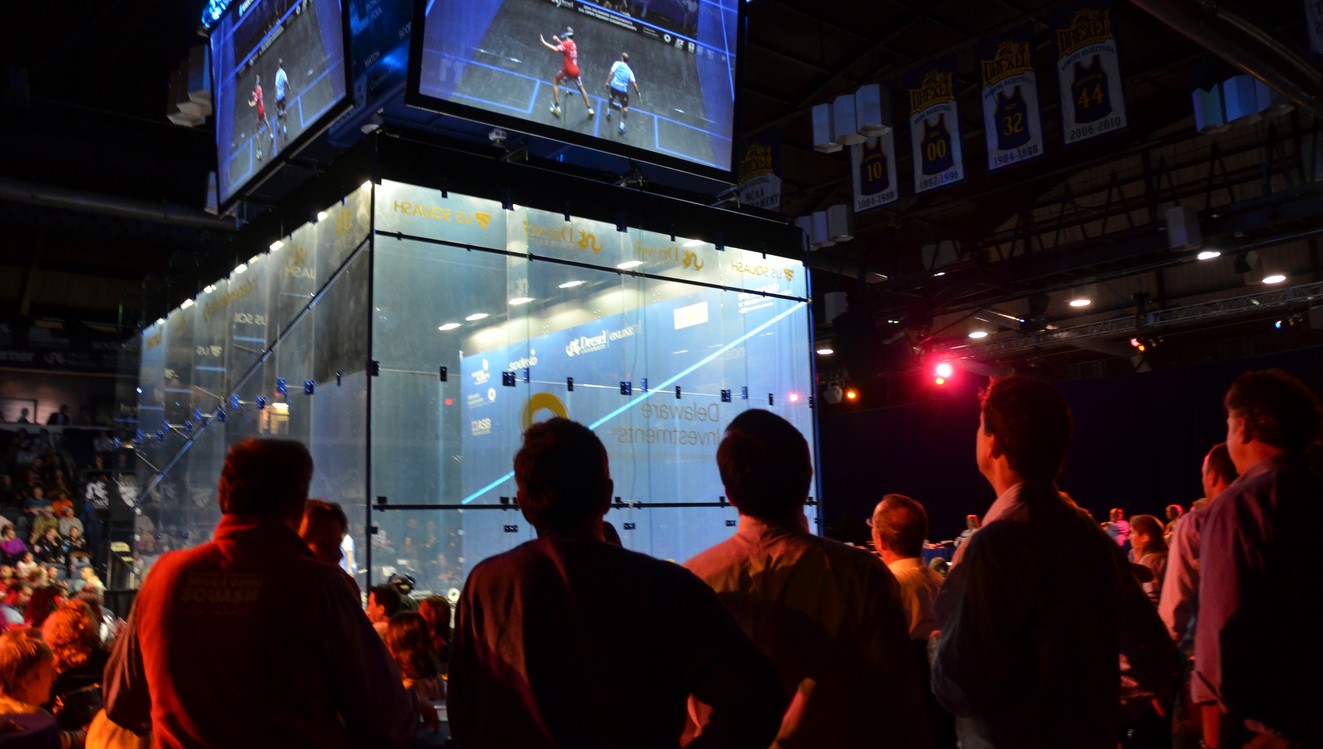 Day seven of the Delaware Investments U.S. Open in Philadelphia saw victory for the higher-seeded players – including the top seeds and defending champions – in the top half of the draw.

Men’s top seed Gregory Gaultier was pushed hard for three games before pulling away from Simon Rosner in the fourth, and Mohamed Elshorbagy set up a showdown with Gaultier as he edged three close games against Adrian Waller. 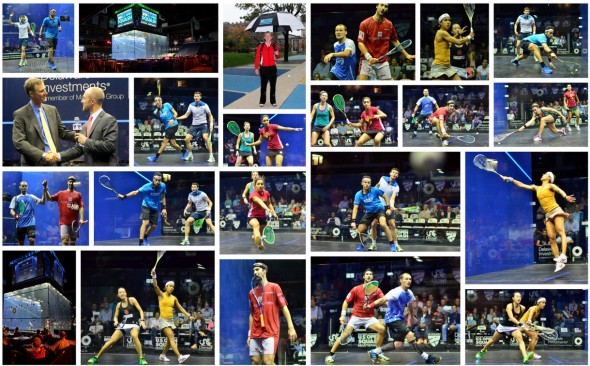 Gaultier And Elshorbagy Set Up US Open Semi Showdown

World No.1 Gregory Gaultier and World No.2 Mohamed Elshorbagy will go head-to-head in the semi-finals of the 2014 Delaware Investments US Open in a mouthwatering encounter that could have significant ramifications at the top of the PSA World Rankings. 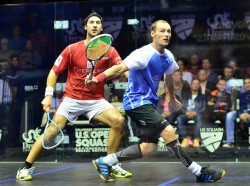 The duo last met in the final of the Hong Kong Squash Open, the first PSA World Series event of the season, when Elshorbagy won 3-2 to claim just his second ever World Series title and victory in Friday’s encounter at Philadelphia’s Drexel University could see him topple the Frenchman at the top of the rankings to become World No.1 for the first time in his career.

The pair are in the midst of a three-way battle with current World Champion Nick Matthew, who takes on Egyptian Fares Dessouki in his quarter-final encounter on Thursday, to occupy the No.1 ranking slot in November but after beating German Simon Rösner 3-1 to move into the semis, Gaultier says his focus is not on the rankings.

“That was a very tough four games against Simon,” said Gaultier after his win. “He was playing very well, being very aggressive and playing some lovely winners which made it tough.

“He played with no pressure and he was very fluid but I’m happy with my performance to get the win in four and I’m delighted now to be in the semi-finals and I’m looking forward to playing against Elshorbagy.

“Last time we played he won 3-2 and I’m ready to play him again. I’ve had a good three weeks of training and he’s confident so I’m looking forward to a good battle.

“I’ve been number one this year and I’m not looking at the rankings. I’m not here with my calculator and checking every day to see if I’m going to be number one or number two, I’m here to play and my focus is on playing well and trying to win the tournament.” 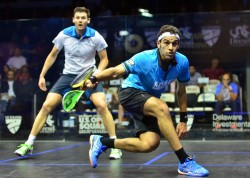 Elshorbagy booked his place in the semi-finals following a well earned 3-0 victory over England’s Adrian Waller in his quarter-final encounter, meaning he’s made it to the last four without dropping a single game in the competition so far.

“When the top four players get to the semi-finals we all raise our game and I think that’s what’s going to happen against Greg,” said the 23-year-old from Alexandria.

“I know I’ve beaten him the last two times, but he’s beaten me nine times before that. He’s the World No.1 and such a strong player and if I play my best there’s still a chance I can loose so I have to hope I get it right on the day.

“Every player wants to be No.1 and I think the pressure is on Greg to defend his ranking. Players say they just come to play and enjoy themselves but I’m sure they’d enjoy it a lot more if they are the No.1 at the end of the tournament.

“I’m No.2 now and people say that’s great but No.2 has always been my worst enemy. You feel you are so close I think you’d rather be 100 than number two so I’m going to do everything I can this week to get that top ranking.”

Malaysia’s world No1 Nicol David has set up arguably the biggest revenge match of her career when she meets Egypt’s world No3 Raneem El Welily in Friday’s semi-finals of the Women’s Delaware Investments US Open in Philadelphia. 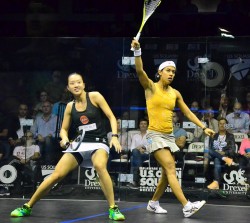 But David’s reward is a chance to avenge her last defeat on the WSA World Tour at the Malaysian Open in August – when a shock semi-final win by El Welily denied the Queen of Malaysian squash a place in the final of her country’s most high-profile event for the first time in 12 appearances since 2003!

David’s match with Wee Wern was a repeat of their Asian Games final in September – an historic first all-Malaysian climax which led to favourite David winning a remarkable fourth gold medal.

Bidding to win a record third successive US Open title, David extended her unbeaten run over her fellow Penangite by beating Low 11-6, 11-4, 11-9.

Unlike the four-game, hour-long Asian Games final in which Low claimed the first game, David controlled the US Open quarter-final from the beginning, forcing a number of Low errors to win the first game. The second ended just as clinically after an even start when David won six straight to clinch the game 11-4.

Low’s most formidable response came in the third game when she won three points to level the game at 9-9, at which point David closed out the 40-minute match 11-9.

“It’s a different tournament and for me it’s another big tournament, so I’m excited to be here,” David said of her pristine record in Philadelphia. “It was tough out there today playing Wee Wern, but I’m happy to win in three.

“It’s difficult playing against your team-mate, but you have to just think that it’s the quarter-finals and whoever is there is a contender, and they’re out to get you. I had to be alert and sharp today and I’m really pleased with my performance,” added 31-year-old David, now in her 21st successive WSA World Series semi-final since losing in the US Open quarters in 2011. 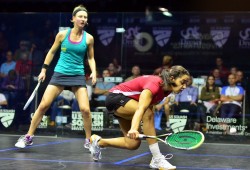 Earlier, El Welily recovered from 5-0 down to overcome fifth seed Waters 11-9, 11-8, 11-5. Londoner Waters not only beat the Egyptian last week at Heights Casino en-route to winning the biggest title of her career, but also held an 8-2 career head-to-head record over El Welily going into the match.

The most dangerous moment for El Welily came as she reached game ball at 10-9 in the first. Waters’ straight return of serve brought up a ‘no let’ call, but the Egyptian made good use of the video review to get that decision overturned, and promptly won the next rally to take the lead.

“I’m very thankful, and happy to win that match,” said the 25-year-old from Cairo. “I don’t think Alison was as fresh as she was last week. She wasn’t getting to a lot of shots that she was running down in New York.

“The rest days we get in this tournament are great,” added El Welily. “It gives you time to relax, chill out, and then prepare for the next round.”

It was a typically cool David who commented on her upcoming clash with El Welily, against whom she boasts a 13-3 Tour head-to-head record: “I’ve had a few tournaments since that match, so I’ve a few big wins, and I think I’ll just bring that forward. I’m looking forward to the semi-finals and I’m ready to go.”