Paderborn-based World No.8 Simon Rösner became the first German squash player ever to reach a PSA World Series final after he stunned World No.1 Gregory Gaultier in the semi-finals of the 2018 J.P. Morgan Tournament of Champions held inside the iconic setting of New York’s Grand Central Terminal. 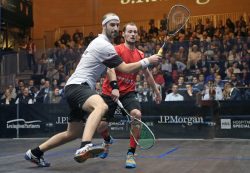 Rösner, 30, reached his maiden World Series semi-final in November’s Qatar Classic, but he surpassed his performances in Doha with a sublime display against the number one seed, against whom he had lost 16 of their previous 17 matches.

A strong start from Gaultier led the Frenchman to go a game up, but Rösner responded with a display of the highest magnitude to take the next three games without reply, claiming a 9-11, 12-10, 11-8, 11-1 to cause one of the biggest shocks in Tournament of Champions history.

“It’s definitely the biggest win of my career,” said Rösner.

“I know I’ve beaten him before, but that was a best-of-three format [during the 2013 PSA World Series Finals] so beating him in a best-of-five is unbelievable. I don’t know how to describe it, it’s the best feeling in the world.” 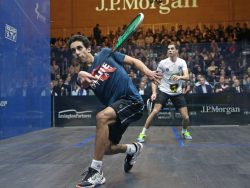 There is guaranteed to be a new name etched onto the men’s trophy after World No.7 Tarek Momen overcame fellow Egyptian Ali Farag in a five-game, 80-minute marathon to book a place in his first Tournament of Champions final.

The momentum ebbed and flowed throughout the match, with Farag twice recovering from a game down, before Momen fought back from 8-4 behind in the fifth game to claim an 11-3, 2-11, 14-12, 6-11, 11-9 triumph to reach his second World Series final.

“To beat Ali is unbelievable, I can’t believe that I was 8-4 down in the fifth and I made it,” said an emotional Momen afterwards.

“I was running on fumes and I just kept pushing and believing in myself. I thought that this is my chance and I had to push until the end. I’m so glad I did, now I’m in a second final this season, I can’t believe that I’m having a very good season and I have one more push tomorrow. I’m going to fight until the end and hopefully I can get my first [World Series] title.” 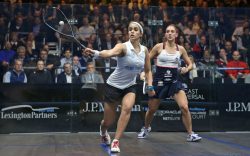 Farag’s defeat means that history won’t repeat itself in New York, but El Tayeb lives to fight another day after claiming a 12-10, 11-6, 11-3 victory in 36 minutes to send defending champion Camille Serme out.

“Camille is one of the hardest players to play against,” El Tayeb said.

“I’m happy I won the first game, it played a crucial part in the match.” 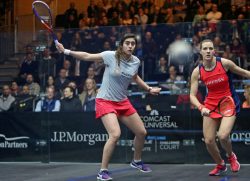 El Tayeb’s final opponent will be World No.1 Nour El Sherbini, who advanced to a fifth successive PSA World Tour final after recovering from a slow start to overcome 2017 runner-up Laura Massaro.

An impeccable start from the English World No.4 saw her power to an 11-4 victory in game one as El Sherbini failed to connect with her attacking shots and hit a litany of uncharacteristic tins.

However, El Sherbini prevailed in a crucial second game that saw Massaro squander a game ball and the momentum was with the Egyptian player from that point onwards as she pressed on to record a 4-11, 12-10, 11-4, 11-8 victory.

“At the beginning she was killing everything,” said El Sherbini.

“Even though I was sure I was going to lose the first game, I just wanted to get some points and play until the last point. I think the second game was very crucial and I think that’s what made the difference.”

The winner of both the men’s and women’s tournaments will claim $24,000 in prize money each, while players will also be battling it out for maximum points for the PSA World Series Standings.

The finals of the 2018 J.P. Tournament of Champions will start from 19:00 local time (GMT-5) tomorrow and will be shown live on SQUASHTV (Rest of World) and Eurosport Player (Europe only), as well as mainstream broadcasters around the world, including BT Sport, beIN Sports, Fox Sports Australia and Astro.