There were no major upsets in the season-ending ATCO PSA World Series Finals in London with England and Egypt producing a double dose of wins at The Queen’s Club as the world’s top eight players adapted to a fast-paced, best-of-three, format on the opening night.

Yorkshire’s James Willstrop, the world No4, opened his account with a hard-fought 13-11, 11-6 win over fellow Englishman and event debutant Alister Walker in 32 minutes.

World No1 Nick Matthew, the second seed bidding to become the first Englishman to win the Finals for ten years, then ended the first night with a comfortable win over Egypt’s Wael El Hindi.

In between, Egyptian duo Amr Shabana and Ramy Ashour won contrasting Group games as a futuristic bubble and, inside, a purple-coloured squash court, took centre stage at the 125 year-old Queen’s Club.

Walker led 10-4 but Willstrop – one of four Englishmen in the tournament – overturned six game-balls to take a lengthy opener in 21 minutes. Walker, the former Leeds-based player who now resides in New York, looked visibly tired in the second and Willstrop quickly wrapped up the second game. 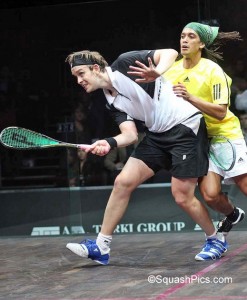 Willstrop, who won Commonwealth Games silver in Delhi, said: “It was tough for both of us having not played competitively for three weeks. But I didn’t want to let it go easily. I think I hurt him a bit in the second, as I hoped I would, and his pace dropped slightly.”

Shabana looked in fine fettle and wasted no time in getting his campaign underway with a comfortable win over LondonerPeter Barker.

Shabana, the four-time world champion, came through 11-8, 11-2 in 28 minutes against the left-hander, another Englishman making his debut in the end-of-year finals.

The Egyptian said: “This format is more compact and normally I would hit more winners – but at least you know you won’t lose the point by being safe. I gained confidence in the second and I’m happy to be through.”

However, the Cairo right-hander had to play near to his best. Despite Lincou’s left knee being heavily strapped, Ashour had to fight back in both games, and the Egyptian admitted afterwards: “I’m really glad I came back in both games as he was killing everything.”

In the final match of the evening, a highly-consistent Matthew took on El Hindi – who first played this event back in 2000 – as the Yorkshireman bids to add the World Series Finals to his world and Commonwealth titles after a stellar year on the world tour.

Matthew, 30, missed last year’s tournament after recovering from shoulder surgery but now looks in good shape to qualify for the semi-finals after coming through 11-5, 11-7. 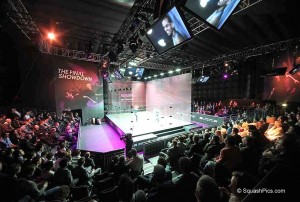 “The venue is fantastic here and it will only get more interesting as the week goes on,” said the 30-year-old from Sheffield. “I was a little bit headless to begin with but I tried to play my normal game and it worked.”

Backed by Ziad Al-Turki, the charismatic Saudi businessman and Professional Squash Association chairman, the World Series Finals are the culmination of the 2010 Super Series season.

The eight players will play in two pools of four until Friday’s semi-finals. The final will take place on Saturday.