After an epic 104-minute final of the XII Abierto Colombian Open – in which second seed Borja Golan was forced to retire at 12-12 in the decider – favourite David Palmer emerged triumphant in the $30,000 event at Club El Nogal in the Colombia capital Bogota.

“With no doubt whatsoever, Palmer and Golan played the best final of the 12 editions of the Colombian Open, which unfortunately ended with the injury of Golan in the tie break of the fifth and final game,” said tournament spokesman Juan Carlos Santacruz. 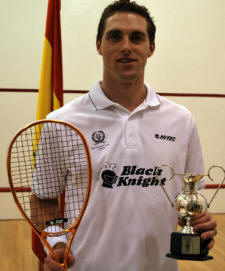 “It was 100 minutes of intense squash, deep, technical, thoughtful and emotive.  Four of the five games played were defined in a tie break demonstrating the parity of level of the players.”

Palmer, the world No6 from Australia competing in his 53rd Tour final, took the opening game – but Spaniard Golan upped the tempo in an ill-tempered second game before drawing level, again after a tie-break.

The 33-year-old from New South Wales reclaimed the advantage after the third – but again Golan came back, taking advantage of several unforced errors from Palmer to force the match into a decider.

“The final game was the best of all the games played in the tournament,” added Santacruz.

Despite surviving a 126-minute five-game semi-final, world No11 Golan maintained the pressure on his higher-ranked opponent and impressed the crowd with his winning back hand drop shots that left Palmer stranded.

But the Australian would not surrender – and the more he was under pressure, the better shots he played!  And it was a drop shot that ultimately won Palmer the title – as Golan injured his knee attempting to retrieve the shot, and was forced to concede the match.

“It was truly an unexpected outcome for the final and sad for the crowd that cheered for Borja,” concluded Santacruz.  “Palmer became the champion.”

The win marks the third Tour title of the year for Palmer, and takes the US-based former world number one’s career tally to 26, more than any other player currently on the PSA World Tour.

The triumph will also boost Palmer’s confidence as he now heads to Chicago to compete in the US Open – and thereafter to Manchester in England where he will defend his title in the  British Open.

David Palmer and Borja Golan will contest the final of the XII Abierto Colombian Open after surviving contrasting semi-finals in the $30,000 PSA World Tour squash championship at Club El Nogal in the Colombia capital Bogota.

After losing the first game, match favourite Golan battled against his opponent and the partisan crowd to move 2/1 ahead.  But underdog Rodriguez, the world No25 and highest-ranked Colombian of all-time, raced to a 10-4 advantage in the fourth.

But an incredible fight back restored the lead for the Spaniard – taking Golan to match ball.  However, the 23-year-old Colombian battled back to force a fifth-game decider – much to the delight of the delirious crowd!

The marathon victory takes 26-year-old Golan into the 27th Tour final of his career, and his second this year.

“Palmer clearly demonstrated why he is the No1 seed of the tournament,” said tournament spokesman Juan Carlos Santacruz. “He initiated the match with firmness, defining long shots, anticipating with great speed and surprising his opponent with boasts from both sides of the court.”

With the altitude conditions affecting both players as the match progressed, it was the former world number one from Australia who ultimately prevailed, winning 11-5, 9-11, 11-6, 11-7 to reach the 53rd final of his career, and the third this year.

The final will mark only the third lifetime meeting between Palmer and Golan – but the second this year after the pair contested a semi-final in the Bluenose Classic in February, after which the Australian went on to win the PSA title in Canada.