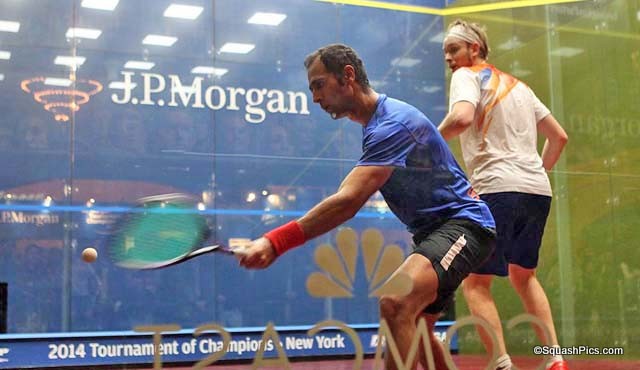 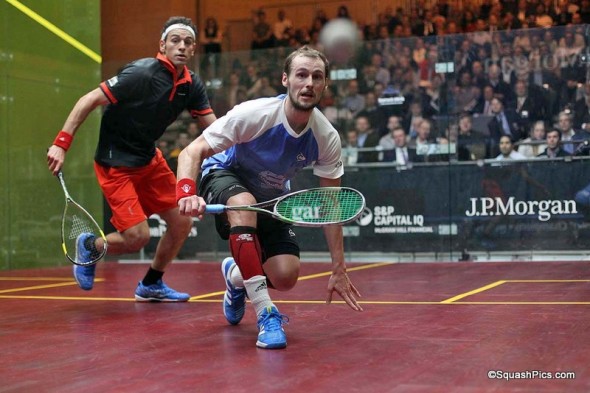 The duo booked their final berths with impressive victories over James Willstrop and Mohamed Elshorbagy, respectively, and will contest a final in which there is more than a title at stake. 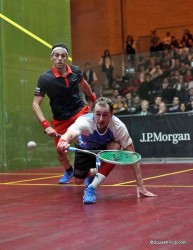 Victory against Elshorbagy saw Gaultier draw level with England’s Nick Matthew atop the world rankings but victory in the final would see him surpass the Sheffield-player to become Squash World No.1 outright.

“Becoming World No.1 again by winning this match was a big goal for me,” said Gaultier.

“Being World No.1 is a big thing for every player and I’m happy I got through today. Everybody was talking about it and I just tried to focus on the match and my tactics – but it gives you a bit of tension and I started the game flat and he came out on fire.

“Today was my turn – one day it will be his – but I keep pushing to try and beat these young players. One day he’ll be up there instead of me so I’m going to enjoy it for a bit but I have another match to play tomorrow.

“Shabana has been unbelievable this week – when he playing like this he is probably the best player.

“To me he his the most inspiring guy and technically I think he is the best. When I’ve watched him this week he has inspired me – but that doesn’t mean I don’t want to beat him – I want to win tomorrow.” 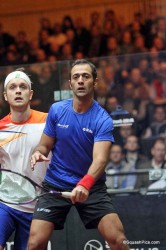 Shabana, who impressed in a 3-1 win over Willstrop in an enthralling contest, will also be hoping to end what has been a tough period of time for him with injury and illness having interrupted his past few seasons and win his first PSA World Series ranking event since 2011.

“Any time you get a win over a player the calibre of James Willstrop you have to be playing your best.

“I’ve made it to the final and I’m happy but I’m just trying to take it day by and day and do my best. Playing in a final at Grand Central is an amazing experience.

“The crowd really get behind the players and we love it so win or lose you just try and enjoy the experience.” 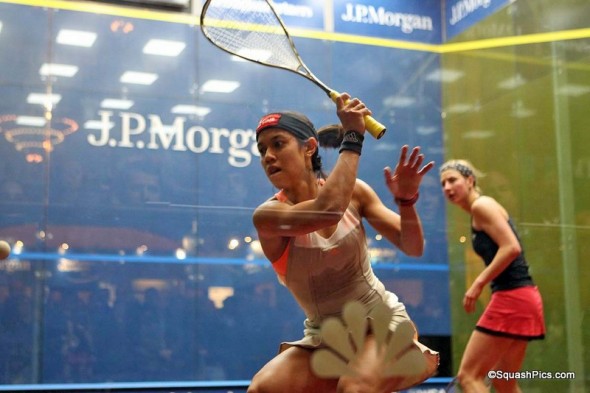 Top seeds through to Women’s Final

There may have been subzero temperatures on the sidewalks of New York City but inside Grand Central Terminal in New York City the heat was on…in the glass squash court in Vanderbilt Hall.  Four of the five top-ranking Women’s Squash Association (WSA) players were on court to fight for the right to compete for the championship title. 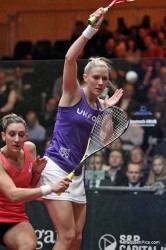 First match on was world #2 Laura Massaro of England against fifth seed Camille Serme. Going into the match, Massaro said she actually felt like the underdog; despite being ranker higher than her opponent, Massaro had lost to Serme three of the last four times they had played. After her quarterfinal victory over Madeline Perry, Serme said she was indeed feeling confident going into the semis.
Massaro came out of the starting gates on fire, winning the first game 11-5. Consistently hitting tight rails and good depth, Massaro was able to control the T and attack every opening that came her way.  “A video of that game should be watched by anyone who wants to understand how to construct a winning point,” said former British national coach David Pearson after the match. “That was the single best game I have ever seen Laura play.” The game was closer than the score would indicate as each player retrieved and attacked and was loathe to give even an inch to her opponent. 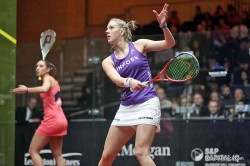 Serme was on fire in the second game, jumping out to 6-0 lead, winning the game 11-3. This time it was Serme who maintained her position in the front court, using short front corner attacking shots and high lobs to force Massaro to scramble and retrieve.
The third game was an early seesaw battle with the lead exchanging hands several times until Massaro broke it open at 8-6, winning the game 11-6.  The fourth game was up for grabs. Serme took the early lead at 4-0, and maintained it through to 7-5. Massaro reasserted herself by finding the length on the rails and her position at the front of the T. At nine all, Serme hit a tin and then Massaro hit a serve that nicked out at the back of the court. 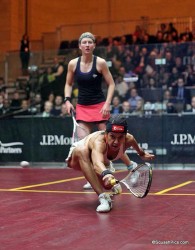 “I just really wanted to be able to enjoy being on court.  My goal was to be relaxed and use the whole court,” said Massaro of her match mindset. “I am excited to be in the finals; finals day is always a big occasion, but especially here in NYC where the crowds are so great.”
In the evening’s second match, world #1 Nicol David defeated fourth seed Alison Waters in three hard   fought and closely contested games.
“It was pretty close all the way,” said David after the match. “I had to put the pressure on with good depth.  I really found the front corners of the court today as well.  After two rounds of play on the glass court, I always see the ball better.”