The top eight seeds showed their strength in the opening encounters of the WSF Women’s World Team Championshipin Nimes with 3/0 victories in the afternoon session of the first day’s play in the biennial World Squash Federation event which is being held in France for the first time in its 33-year history.

The eight nations continue their qualifying action with further ties in today’s evening session – with hosts France making their debut against Netherlands on the ‘centre’ court of the three all-glass courts at La Parnasse Arena, and additional action also taking place at the nearby eight-court Club des Costières.

Favourites England – bidding to win the title for a seventh time, but for the first time since 2006 – beat championship debutants Republic Of Korea 3/0. England’s powerful line-up featured Alison Waters, Jenny Duncalf and Sarah Kippax – all in the world’s top 25 – while only one of the Koreans is world-ranked.

“We are really focussed and wanted to get a strong start from the outset,” said England team coach David Campion. “But, credit to Korea, their players were not overawed by the occasion and showed great technique and athleticism.”

Second seeds Egypt saw off Scotland 3/0. Pushed down to 24th seeds after the last-minute withdrawal of number oneLisa Aitken, Scotland’s hopes were lifted when, on the eve of her 31st birthday, new top string Frania Gillen-Bucherttook the opening game against Nour El Sherbini. But the Egyptian teenager restored order by winning 9-11, 11-3, 13-11, 11-8 in 35 minutes. 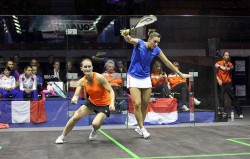 The first upset in the 2012 WSF Women’s World Team Championship came before the biggest crowd surrounding one of the three all-glass courts at La Parnasse Arena in Nimes where hosts France beat Netherlands in a dramatic tie which went to the wire.

The historic World Squash Federation event, boasting a record entry of 26 nations, is the first ever to be staged in France, and the first to feature three all-glass show courts.

The tie promised maximum drama, with Netherlands seeded eight, and France one place below – yet coming into the event after a best-ever sixth place finish in the previous championship.

French number one Camille Serme, the world No14, opened proceedings for the hosts against Natalie Grinham, the Dutch champion ranked three places higher. They shared three wins apiece in their six earlier meetings – but tonight the packed crowd was entirely with the hosts. 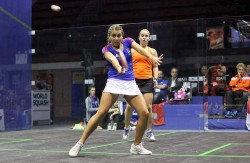 The nervous crowd were willing the team’s fourth string all the way – and Laura Pomportes did not disappoint, beatingMilou van der Heijden 11-5, 11-5, 9-11, 11-2 in 40 minutes to give France a strong chance of topping Pool H.

“It was a good win, but it would have been better if we’d won the second match,” said French national coach Philippe Signoret. “It was certainly good for our confidence and Camille’s win was especially good as she has had some disappointing results over the past three months.

“Now we must beat Germany tomorrow to top the pool, then we will probably have a very tough match with either Ireland or India – so there’s still a lot of work to do,” added Signoret.

China made history in Pool C by marking their first ever world championship win. In only their second ever appearance in the event, the 19th seeds face Spain, a more ‘traditional’ squash-playing nation which has competed in the championships since 1989.

“Competing in this tournament gives our players a very precious opportunity to gain experience against the top players in the world,” said Wang Tao, Secretary General of the Chinese Squash Association.

“Squash is getting more and more popular in our country – especially amongst students – and all our team are studying and playing squash at Shanghai University.

“We really hope that the sport’s bid to get into the Olympic programme will be successful as it will then enable us to get more funding from the government,” added Ms Wang Tao. “We are confident that squash will then get much bigger in China.”

A major upset took place late in the day in Pool G when tenth seeds India beat Ireland, the No7 seeds, 2/1 – reversing the result of the same poll clash two years ago. Rising star Dipika Pallikal paved the way with a four-game victory over experienced Irish champion Madeline Perry – but the squad number two Joshana Chinappa let slip a 2/1 lead to allowAisling Blake, and Ireland, back into the tie.

But teenager Anaka Alankamony held her nerve to see off Laura Mylotte 12-10, 11-3, 11-7 to give India a sensational victory.

The top four seeds England, Egypt, Malaysia and Hong Kong all earned their second 3/0 wins of the day – but only favourites England did so in three straight games match wins.

“It was an excellent start to our campaign today,” said England team coach David Campion. “The girls were in confident mood against a spirited team from Mexico and are excited about the week ahead. The three glass courts under one roof is quite impressive.”