Top seeds and defending champions James Willstrop and Nicol David successfully navigated their first round matches in the Hong Kong Open as the main draw got under way at Hong Kong Squash Centre with the top half of both draws.

There was just one upset on a long day which fetured several marathon encounters and finished well after midnight, as Guyana’s Nicolette Fernandes became the only one of  nine qualifiers in action to progress, and one home victory as Joey Chan advanced but wildcards Leo Au and Liuu Tsz-Ling were both beaten. 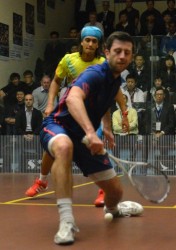 Daryl Selby and Alister Walker, two of the closest-ranked players battling against each other, duly produced the longest match of the day to entertain a packed Centre Court crowd.

Englishman Selby, the world No10 and highest-ranked unseeded player in the draw, dropped the first game to former England team-mate Walker, the world No12 who now represents Botswana, the country of his birth.

“Brutal match in Hong Kong first round against my good friend @alisterWALKER,” tweeted 30-year-old Selby later. “Proper battle and lucky to win it in the end. #toughdraw.”

The marathon match made a significant impact on the drawn out schedule of the day – which eventually came to a close after 12.30am when the fourth match lasting more than an hour finished, Malaysian Ong Beng Hee earning a 9-11, 11-5, 11-9, 8-11, 11-5 victory in 75 minutes over Colombian Miguel Angel Rodriguez.

The win sees Beng Hee, the 32-year-old former world No7 from Penang who made his debut in the event 12 years ago, secure a place in the second round for the first time in four years.

Selby led a trio of Englishmen through to the last 16 round. Fellow Essex man Peter Barker, the sixth seed, had to fight back from a game down to overcome Egyptian qualifier Karim Abdel Gawad 7-11, 11-6, 11-5, 11-6.

Later, defending champion James Willstrop, the world number one from Leeds, also had to recover from the loss of the first game before seeing off England team-mate Adrian Grant 5-11, 11-8, 11-3, 11-8 in 73 minutes.

Like his fellow first round winners, the world No17 from New South Wales will relish the day’s break before having to face Barker for a place in the quarter-finals.

Fernandes the only upset on day one 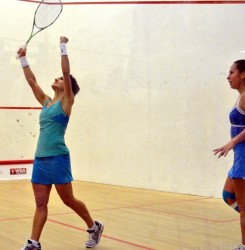 The Women’s WSA World Series event, boasting a $70,000 prize-fund, kicked with No.3 seed Jenny Duncalf looking to improve her form after a disappointing recent run.  Last year’s Rotterdam World Open runner-up played Delia Arnold of Malaysia and the Englishwoman closed out the narrowest of straight-game victories to book her second round place.

Duncalf will face twelfth seed Dipika Pallikal, who was given an early scare by local wildcard Liu Tsz-Ling.  The home hope took the first game before the Indian No.1 refocused to grasp the match firmly from the second game to win in four games.

Experienced Dutchwoman Natalie Grinham saw off the challenge of the only Egyptian in the top half of the draw, Heba El Torky.  The Netherlands international took under half and hour to dispatch the 21-year-old qualifier in straight games, and will now face surprise second round opponent Nicolette Fernandes.

The Guyanese player, who had already seen 48-minutes of court time during her qualifying matches, came out on top after a five-game thriller against No.14 seed Samantha Teran of Mexico, recording her best career win to date.

Ninth seed Kasey Brown saw a straight games win over qualifier Lauren Briggs propel her into a second round clash with No.5 seed Madeline Perry.  Perry also made light work over her qualifying opponent Amanda Landers-Murphy in three games.

Highest seeded local of today’s play Joey Chan pleased the on-looking crowd by beating Kylie Lindsay of New Zealand.  The qualifying Kiwi had started quickly and stole a march on Hong Kong’s number two, but Chan upped her performance to take the next three games and close out the contest.