The ‘FA Cup’ style open draw introduced by the Professional Squash Association as an innovation at the quarter-final stage of the inaugural Kuwait PSA Cup produced a dramatic result when the event’s top two seeds Nick Matthew andKarim Darwish were pulled out of the hat to face each other for a place in the semi-finals of the eighth PSA World Series event of the year at Green Island in Kuwait City. 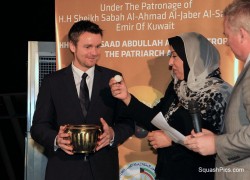 The draw took place at a Gala Dinner in Kuwait, at which host and Tournament Chairman Sheikha Fadyah Al-Sabah drew the first name Stewart Boswell. The 15th seed from Australian then drew his opponent – Gregory Gaultier, the No5 seed from France.

The next match drawn pitched English rivals James Willstrop and Peter Barker together.

Karim Darwish, the No2 seed from Egypt, was the next name drawn – and he duly provided the ‘dream’ quarter-final clash when he picked Nick Matthew, the top seed from England who is also the world number one and reigning world champion.

It will be the pair’s ninth Tour meeting since 2004 – but their second of the month after clashing in the World Open semi-finals in Rotterdam. 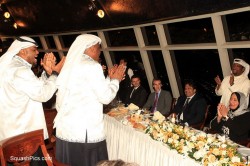 “The Kuwait Towers was a fabulous setting to host the first ever PSA Cup draw, which was certainly a intense experience for all involved,” said PSA Chief Operating Officer Lee Beachill.

“We were delighted with the amount of attention the draw created with local television and media taking a big interest in the event hosted by Sheikha Fadyah.

“The random draw was obviously going to create some interesting line-ups – and with some players happy with their draw, and some not, what it has created is an exciting climax to this unique event.”