The world’s top two women squash players Nicol David and Jenny Duncalf will line up in Sunday’s final of the Women’s Cathay Pacific Sun Hung Kai Financial Hong Kong Open after prevailing in the semi-finals of the $74,000 WISPA World Tour event, the seventh WISPA Gold championship of the year, in straight games.

Nicol David, the world number one from Malaysia looking for a sixth successive title win in Hong Kong, survived two close games with career-long rival Rachael Grinham before beating the Australian 11-9, 11-9, 11-5 on an all-glass court erected in the Plaza Hollywood shopping centre in Kowloon.

“Rachael and I have played each other so many times over the years,” explained David to www.squashsite.co.uk after their 30th Tour clash since April 2000. “I knew she would come out firing, and I just had to try and stick with her. Fortunately I managed to sneak the first two games and held my game together in the third.

“It’s great to make another final here in Hong Kong in front of such a great crowd,” added the Penangite on the eve of her 62nd WISPA Tour final. 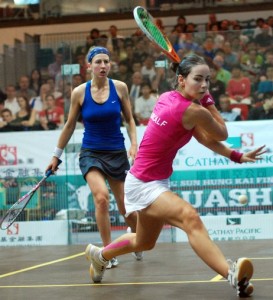 Jenny Duncalf survived an all-English mach against her national team-mate Alison Waters, avenging her loss in this year’s British National Championship final to beat the world No4 11-4, 11-4, 11-7.

“I’m pleased with that,” said the 27-year-old from Harrogate, now in her 16th Tour final – five of which have been againstNicol David.

“We usually have very tough matches, and I was a bit concerned after having such a tough match yesterday, but she didn’t play as well as she would have liked.

“I managed to stretch out leads in the first two, and pulled a few back in the third, but she can play better than that.

“I’m really happy to be in the final here for the first time.”

It will be Duncalf and David’s fourth meeting in a Tour final this year.