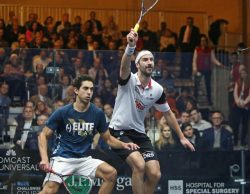 Men’s World No.8 Simon Rösner and women’s World No.1 Nour El Sherbini prevailed on finals day at the 2018 J.P. Morgan Tournament of Champions, beating Egyptian duo Tarek Momen and Nour El Tayeb, respectively, under the chandeliers of Grand Central Terminal’s Vanderbilt Hall in New York to take one of squash’s most prestigious titles.

Rösner became the first ever German squash player to win a PSA World Series tournament after he followed up a stunning semi-final upset of World No.1 Gregory Gaultier to take an 11-8, 11-9, 6-11, 11-5 victory over World No.7 Momen in 71 minutes. 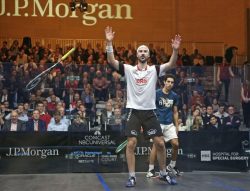 The 30-year-old from Paderborn played with precision and guile to go two games up and then showed the grit and determination that took him to his maiden World Series final in the fourth game as he recovered from dropping the third and become the first non-Egyptian male to win the Tournament of Champions since England’s Nick Matthew in 2012. 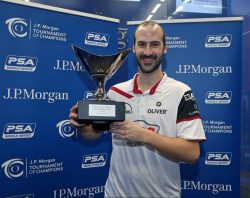 “It’s a unbelievable feeling,” said Rösner, who will move up to World No.6 in next month’s World Rankings.

“That was the biggest match of my career and to win it is incredible. Coming here this week, I didn’t expect to win the championship.

“But this is what you work for every day. To play on this kind of stage is the reason you wake up, train hard, stay disciplined and go through all of that. And for that to pay off, in New York, in Grand Central Terminal, with the Tournament of Champions title – it’s unbelievable.” 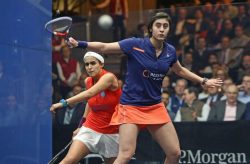 Meanwhile, El Sherbini lifted her second Tournament of Champions title, and her third World Series title in a row, after twice fighting back from a game down against U.S. Open champion Nour El Tayeb.

The 22-year-old was appearing in a fifth successive PSA World Tour final, a run which included World Series wins at the Saudi PSA Women’s Masters and Hong Kong Open, but suffered a disastrous start as she took just two points in a one-sided opening game. 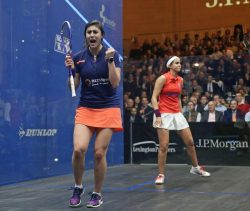 “I’m extremely happy, I couldn’t have asked for a better start to 2018. I’ve been playing well and this is my fifth final in a row. I worked really hard in the summer and have been trying to enjoy playing when I’m out there and that hard work is paying off right now. 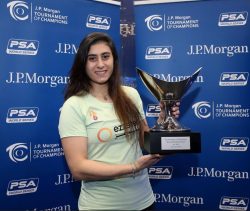 “Hopefully I can keep this momentum going for the rest of the season.”

Both players will pocket $24,000 for their victories, with the Tournament of Champions committing to equal prize money for the third year in succession.

Rösner’s victory sees him overtake Momen to go third on the Men’s World Series Standings to all but guarantee himself a top-eight spot, which will see him qualify for June’s PSA World Series Finals.

El Sherbini, meanwhile, has extended her lead on the women’s standings to 105 points over World Champion Raneem El Welily and El Tayeb, who sit in joint 2nd.